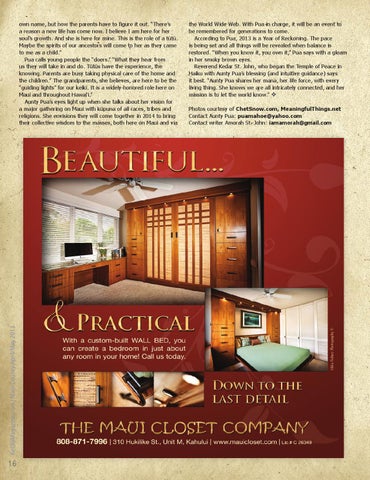 own name, but now the parents have to figure it out. “There’s a reason a new life has come now. I believe I am here for her soul’s growth. And she is here for mine. This is the role of a tūtū. Maybe the spirits of our ancestors will come to her as they came to me as a child.” Pua calls young people the “doers.” “What they hear from us they will take in and do. Tūtūs have the experience, the knowing. Parents are busy taking physical care of the home and the children.” The grandparents, she believes, are here to be the “guiding lights” for our keiki. It is a widely-honored role here on Maui and throughout Hawai‘i.” Aunty Pua’s eyes light up when she talks about her vision for a major gathering on Maui with kūpuna of all races, tribes and religions. She envisions they will come together in 2014 to bring their collective wisdom to the masses, both here on Maui and via

the World Wide Web. With Pua in charge, it will be an event to be remembered for generations to come. According to Pua, 2013 is a Year of Reckoning. The pace is being set and all things will be revealed when balance is restored. “When you know it, you own it,” Pua says with a gleam in her smoky brown eyes. Reverend Kedar St. John, who began the Temple of Peace in Haiku with Aunty Pua’s blessing (and intuitive guidance) says it best. “Aunty Pua shares her mana, her life force, with every living thing. She knows we are all intricately connected, and her mission is to let the world know.” ❖ Photos courtesy of ChetSnow.com, MeaningfulThings.net Contact Aunty Pua: puamahoe@yahoo.com Contact writer Amorah St. John: iamamorah@gmail.com