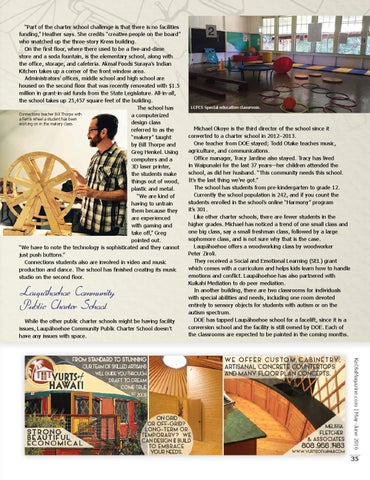 “Part of the charter school challenge is that there is no facilities funding,” Heather says. She credits “creative people on the board” who snatched up the three-story Kress building. On the first floor, where there used to be a five-and-dime store and a soda fountain, is the elementary school, along with the office, storage, and cafeteria. Akmal Foods Suraya’s Indian Kitchen takes up a corner of the front window area. Administrators’ offices, middle school and high school are housed on the second floor that was recently renovated with $1.5 million in grant-in-aid funds from the State Legislature. All-in-all, the school takes up 25,457 square feet of the building. The school has Connections teacher Bill Thorpe with a computerized a Ferris wheel a student has been design class working on in the makery class. referred to as the “makery” taught by Bill Thorpe and Greg Henkel. Using computers and a 3D laser printer, the students make things out of wood, plastic and metal. “We are kind of having to untrain them because they are experienced with gaming and take off,” Greg pointed out. “We have to note the technology is sophisticated and they cannot just push buttons.” Connections students also are involved in video and music production and dance. The school has finished creating its music studio on the second floor.

Michael Okoye is the third director of the school since it converted to a charter school in 2012–2013. One teacher from DOE stayed; Todd Otake teaches music, agriculture, and communications. Office manager, Tracy Jardine also stayed. Tracy has lived in Waipunalei for the last 37 years—her children attended the school, as did her husband. “This community needs this school. It’s the last thing we’ve got.” The school has students from pre-kindergarten to grade 12. Currently the school population is 242, and if you count the students enrolled in the school’s online “Harmony” program it’s 301. Like other charter schools, there are fewer students in the higher grades. Michael has noticed a trend of one small class and one big class, say a small freshman class, followed by a large sophomore class, and is not sure why that is the case. Laupāhoehoe offers a woodworking class by woodworker Peter Ziroli.  They received a Social and Emotional Learning (SEL) grant which comes with a curriculum and helps kids learn how to handle emotions and conflict. Laupāhoehoe has also partnered with Kuikahi Mediation to do peer mediation. In another building, there are two classrooms for individuals with special abilities and needs, including one room devoted entirely to sensory objects for students with autism or on the autism spectrum. DOE has tapped Laupāhoehoe school for a facelift, since it is a conversion school and the facility is still owned by DOE. Each of the classrooms are expected to be painted in the coming months.

ON GRID OR OFF-GRID? LONG-TERM OR TEMPORARY? WE CAN DESIGN & BUILD TO E MB RAC E YOUR NEEDS.