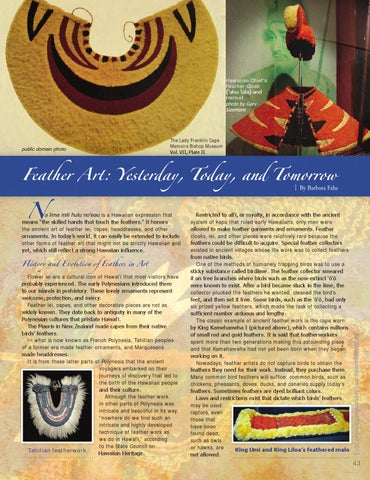 a lima mili hulu no‘eau is a Hawaiian expression that means “the skilled hands that touch the feathers.” It honors the ancient art of feather lei, capes, headdresses, and other ornaments. In today’s world, it can easily be extended to include other forms of feather art that might not be strictly Hawaiian and yet, which still reflect a strong Hawaiian influence.

History and Evolution of Feathers in Art

Restricted to ali‘i, or royalty, in accordance with the ancient system of kapu that ruled early Hawaiians, only men were allowed to make feather garments and ornaments. Feather cloaks, lei, and other pieces were relatively rare because the feathers could be difficult to acquire. Special feather collectors existed in ancient villages whose life work was to collect feathers from native birds. One of the methods of humanely trapping birds was to use a sticky substance called birdlime. The feather collector smeared it on tree branches where birds such as the now-extinct ‘ō‘ō were known to exist. After a bird became stuck in the lime, the collector plucked the feathers he wanted, cleaned the bird’s feet, and then set it free. Some birds, such as the ‘ō‘ō, had only six prized yellow feathers, which made the task of collecting a sufficient number arduous and lengthy. The classic example of ancient feather work is the cape worn by King Kamehameha I (pictured above), which contains millions of small red and gold feathers. It is said that featherworkers spent more than two generations making this astounding piece and that Kamehameha had not yet been born when they began working on it. Nowadays, feather artists do not capture birds to obtain the feathers they need for their work. Instead, they purchase them. Many common bird feathers will suffice: common birds, such as chickens, pheasants, doves, ducks, and canaries supply today’s feathers. Sometimes feathers are dyed brilliant colors. Laws and restrictions exist that dictate which birds’ feathers may be used: raptors, even those that have been found dead, such as owls or hawks, are King Umi and King Liloa’s feathered malo not allowed.

Flower lei are a cultural icon of Hawai‘i that most visitors have probably experienced. The early Polynesians introduced them to our islands in prehistory. These lovely ornaments represent welcome, protection, and mercy. Feather lei, capes, and other decorative pieces are not as widely known. They date back to antiquity in many of the Polynesian cultures that predate Hawai‘i. The Maoris in New Zealand made capes from their native birds’ feathers. In what is now known as French Polynesia, Tahitian peoples of a former era made feather ornaments, and Marquesans made headdresses. It is from these latter parts of Polynesia that the ancient voyagers embarked on their journeys of discovery that led to the birth of the Hawaiian people and their culture. Although the feather work in other parts of Polynesia was intricate and beautiful in its way, “nowhere do we find such an intricate and highly developed technique of feather work as we do in Hawai‘i,” according to the State Council on Tahitian featherwork Hawaiian Heritage.