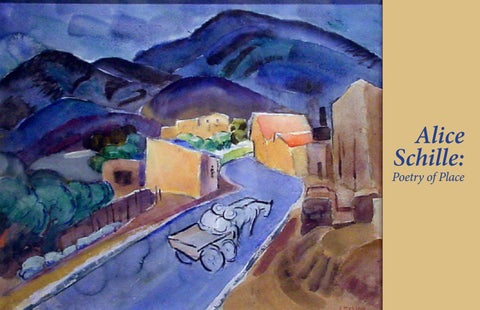 “The work of A. Schille -- a distinguished artist of Columbus, Ohio is remarkable for (its) wonderful delicacy, taste and beauty. There is a refinement, an unusually fine color sense, and general excellence of selection and treatment in each of them that are rarely to be found.” – Baltimore Maryland News, February 17, 1909 review of the Baltimore Water Color Club Exhibition

“There is design and color and meaning -- there is significance in all of Alice Schille’s works. She is undoubtedly one of the best of America’s women painters.” – Chicago Herald Examiner review of Art Institute of Chicago’s Third Annual International Exhibition of Watercolors, March 20 - April 22, 1923

Born in Columbus, Ohio in 1869, Schille studied at the Columbus Art School from 1891 to 1893 and then traveled to New York to augment her training. There she enrolled at the Art Students League and also studied at William Merritt Chaseâ&#x20AC;&#x2122;s New York School of Art from 1897 to 1899. In 1903, she traveled to Paris for instruction at the Academie Colarossi and for private study. Although she returned to Columbus in 1904 to commence teaching at the Columbus Art School, she revisited France each summer until the outbreak of World War I in 1914. During this decade, she witnessed the major 1907 retrospective of Cezanneâ&#x20AC;&#x2122;s work in Paris and visited the studio of Gertrude Stein, where she met Picasso and was profoundly influenced by his work and that of Henri Matisse. These influences began to be seen in her work as early as 1909.

Starting in 1900 Schille began showing her works at the annual exhibitions of the New York Water Color Club, Art Institute of Chicago, American Water Color Society in New York and at the Philadelphia Watercolor Club held at the Pennsylvania Academy of Fine Arts. William Merritt Chase purchased one of her watercolors from a 1905 Philadelphia Art Club exhibition. Subsequently, seven watercolors on exhibit at the Pennsylvania Academy were sold. Schille also had numerous one person exhibitions at the Columbus Art Association (1912), Columbus Gallery of Fine Arts (1921, 1923, 1926, and 1932) and the Cincinnati Art Museum (1911 and 1915). A series of Post-Impressionist watercolors earned her the first prize at the Society of Western Artists in 1913.

In 1915, the eminent art instructor and artist, Arthur Dow, awarded her the first prize for watercolor at the Pennsylvania Academy of Fine Arts. That same year she also won a gold medal in this medium at San Francisco’s Panama-Pacific Exposition. After the outbreak of World War I, Schille spent the next several summers in the art colony of Gloucester, Massachusetts. Encouraged by her American peers, she then fully embraced modernism. In 1917, the pioneering dealer Charles Daniel sold her work in New York to Ferdinand Howald of Columbus, the astute collector of modernism. Howald purchased three of her Pointillist beach scenes. Subsequently, she spent her summers of 1919, 1920, 1921 and 1926 in New Mexico, where she more fully developed her Modernist aesthetic. She

exhibited at the New Museum of New Mexico in 1920 in a one-person exhibition and a group exhibition. Dr. Gerdts, in his monograph Alice Schille, discussed “the magnificent Ranchos de Taos after a Rain” and his following description could very well apply to Ranchos de Taos – Oblique View in this exhibition – “thick, heavy planes of the back of the church glow with myriad colored washes, almost filling up the entire space, utilizing a daring, completely fluid ‘wet-on-wet’ technique. . . Schille’s fascination with the monolithic appearance of the church from the rear identifies her as one of the early modernists to depict the monument.” Throughout her life, Schille delighted in travel. After World War I, she resumed exploring European sites and also visited more exotic locales such as Egypt, Morocco, Tunisia, Istanbul, Mexico and Guatemala until the early 1940’s. Always

visually alert, she incorporated local people, their activities, and the architecture of the region within her constantly-evolving and eclectic watercolors. To quote William Robinson, Senior Curator of Modern European Painting and Sculpture of the Cleveland Museum of Art, “in retrospect, Schille was clearly one of the earliest American artists to assimilate European modernism and to bring its influence to the United States.” James Keny and Timothy Keny Keny Galleries

“Loose, wet, and dominated by low earth tones, with pastel color worked into the highlights, her work updated the style of the Hague school, by now de rigueur for Dutch and Breton subjects. . . when she branched out to exhibit with watercolor clubs in Philadelphia and Chicago (in 1905), and with the venerable ASW in 1907. Schille regularly sent between five and ten watercolors every year to these venues and others in Boston and Washington, DC, where she won her first exhibition prize in 1908. . .” – Kathleen Foster American Watercolor in the Age of Homer and Sargent, 2017 A Gray Market, c. 1908 watercolor, 10 1/2 x 14 in.

“A denizen of art colonies, she would work in Santa Fe and Taos, New Mexico. . . as well as in other sunny places where her increasingly transparent and electric color found sympathetic subjects. . .” – Kathleen Foster American Watercolor in the Age of Homer and Sargent, 2017

Exhibited five works (three watercolors and two oils) at the Société Nationale des BeauxArts, Paris (the Paris Salon) Commenced teaching regularly at the Columbus Art School, traveling and painting during the summers 1905-14 Traveled to France and neighboring European countries in the summers to paint and to attend exhibitions. In Paris, met the influential art collector and writer Gertrude Stein. The French province of Brittany was a favorite destination. Stayed in London, Nice, Paris and Siena, as well Exhibited as a member of the Society of Western Artists at major museums in the Midwest, including those in Cincinnati, Detroit, Chicago and Cleveland 1909 Accompanied by Martha Walter, made summer trip to Dalmatia. Painted watercolors that are daubed in a subtle Pointillist manner Became an Associate member of the American Water Color Society 1910 Had first one-person exhibition at the Jackson, Michigan Public Library Made summer trip to Cornwall, England By this date, at least six Schille watercolors

were owned by Samuel White, who, with his wife, Vera, were to be Schille’s most important patrons. The Whites acquired an outstanding collection of modern works of art by Van Gogh, Matisse, Picasso, etc. 1911 Exhibited Dalmatian watercolors at first oneperson show in Ohio, at the Cincinnati Art Museum Made summer trip to France and painted the hill city of Le Puy in southeast France, where she returned in following years 1912 Had first one-person exhibition at the Carnegie Library, Columbus. Had solo exhibitions at the Columbus Gallery of Fine Arts also in 1921, 1923, 1926 and 1932 1913 Traveled to Belgium and France during the summer, accompanied by Olive Rush Subject of a feature article by Edna Owings in International Studio, August 1914 Summer travels in France included trips to the beach town of Paris-Plage and probably to Provence In August, at the outbreak of World War I, left France for England before returning home to Columbus

“In retrospect, Schille was clearly one of the earliest American artists to assimilate European modernism and to bring its influence to the United States. . . Above all, Schille developed her own highly original, personal style that is at once lyrical and powerful, sophisticated in technique and formal design, spare yet richly orchestrated. An intuitive, instinctual painter, she identified more closely with the Expressionists than with the more theoretical concerns of rigid formalists and advocates of complete abstraction.” – William Robinson, Senior Curator of Modern European Painting and Sculpture, Cleveland Museum of Art Alice Schille: Ohio Artist, Her Innovative Spirit Canton Museum of Art, 2001