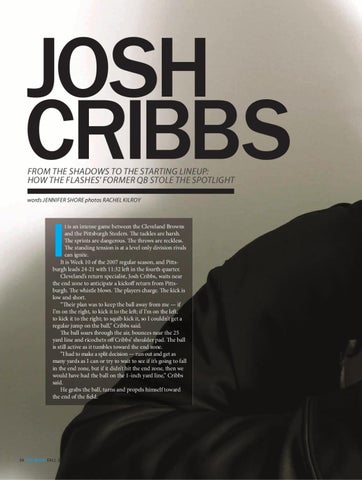 JOSH CRIBBS From tHe sHadows to tHe startinG lineuP: How tHe FlasHes’ Former Qb stole tHe sPotliGHt

t is an intense game between the Cleveland Browns and the Pittsburgh Steelers. The tackles are harsh. The sprints are dangerous. The throws are reckless. The standing tension is at a level only division rivals can ignite. It is Week 10 of the 2007 regular season, and Pittsburgh leads 24-21 with 11:32 left in the fourth quarter. Cleveland’s return specialist, Josh Cribbs, waits near the end zone to anticipate a kickoff return from Pittsburgh. The whistle blows. The players charge. The kick is low and short. “Their plan was to keep the ball away from me — if I’m on the right, to kick it to the left; if I’m on the left, to kick it to the right; to squib kick it, so I couldn’t get a regular jump on the ball,” Cribbs said. The ball soars through the air, bounces near the 25 yard line and ricochets off Cribbs’ shoulder pad. The ball is still active as it tumbles toward the end zone. “I had to make a split decision — run out and get as many yards as I can or try to wait to see if it’s going to fall in the end zone, but if it didn’t hit the end zone, then we would have had the ball on the 1-inch yard line,” Cribbs said. He grabs the ball, turns and propels himself toward the end of the field.