Eddy and His Teddy By Kent Miller 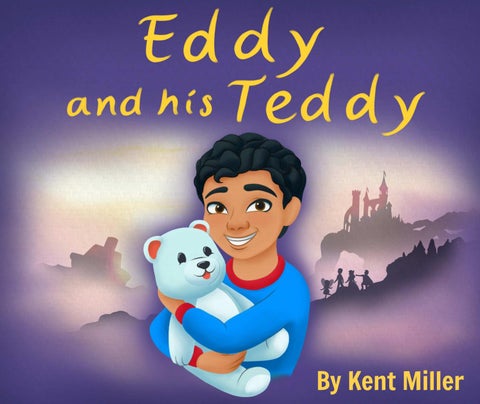 Once there was a boy named Eddy who had a teddy bear he named Teddy. Eddy loved Teddy very much.

Eddy and his teddy would do everything together. When Eddy was asleep with teddy, he felt safe.

Eddy searched everywhere in his room for his beloved teddy bear.

When there was no where else Teddy could be, Eddy decided to climb up the shaky ladder that led up to the dark attic.

The attic was dusty and dark. There were only a few boxes that Teddy could be in.

Eddy saw a tiny light on the other side of the attic. He decided to walk towards it.

As Eddy walked, the mysterious light grew larger and larger until...

... He ended up in a magical land full of flowers underneath a purple sky.

In the distance he could see a beautiful pink castle. &quot;Maybe Teddy is there&quot; he thought.

When Eddy got to the castle, a princess, the same age as him named Sarah, came to greet him excited to have a new friend in her kingdom.

Sarah then brought Eddy to her castle to show him all her dress up clothes.

Eddy was amazed at all the dress up clothes that the princess had, but he still wanted to find Teddy. After being dressed up all fancy, he asked the princess where his teddy could be.

Princess Sarah said that Teddy could be in the Toy City where toys live. She also mentioned that she would be happy to help him to find Teddy.

So then Sarah and Eddy went into an enchanted forest.

The forest was scary, but Sarah assured that Toy city would be just on the other side of the forest.

Soon they got lost, but before they knew it a fairy sprung out from behind a tree asking if they were going to Toy city too, and if she could join them.

Eddy and Sarah agreed to let the fairy come with them.

The fairy then lead them out of the enchanted forest to the sea of bubbles. Toy city is on the other side of the sea, but no one knew how they could cross it.

Nearby they came across a knight who just so happened to have a little blue boat. Eddy asked the knight they could use the boat to get to Toy City

The Knight was always up for adventure, so he agreed and took the group across the sea of bubbles

It was filled with different objects, like a giant rubber ducky. The waves rose high above the little blue boat.

But Eddy just held on tight, in hopes of finding his Teddy.

Then, in the distance, Toy city came in to view. The group have made it.

Teddy was right there to greet Eddy in the city. The entire group cheered in joy at the reunion.

Eddy then returned home with his Teddy braver than before.

Once upon a time, a boy loved his teddy bear. One day he could not find his Teddy, So off on a journey he went to find his lost Teddy.

Eddy and His Teddy By Kent Miller

Once upon a time, a boy loved his teddy bear. One day he could not find his Teddy, So off on a journey he went to find his lost teddy.