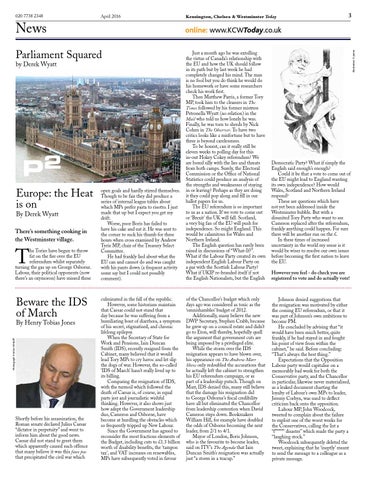 open goals and hardly stirred themselves. Though to be fair they did produce a series of internal league tables about which MPs prefer pasta to risotto. I just made that up but I expect you get my drift. Worse, poor Boris has failed to have his cake and eat it. He was sent to the corner to suck his thumb for three hours when cross examined by Andrew Tyrie MP, chair of the Treasury Select Committee. He had frankly lied about what the EU can and cannot do and was caught with his pants down (a frequent activity some say but I could not possibly comment).

Just a month ago he was extolling the virtue of Canada’s relationship with the EU and how the UK should follow in its path but by last week he had completely changed his mind. The man is no fool but you do think he would do his homework or have some researchers check his work first. Then Matthew Parris, a former Tory MP, took him to the cleaners in The Times followed by his former mistress Petronella Wyatt (no relation) in the Mail who told us how lonely he was. Finally, he was torn to shreds by Nick Cohen in The Observer. To have two critics looks like a misfortune but to have three is beyond carelessness. To be honest, can it really still be eleven weeks to polling day for this in-out Hokey Cokey referendum? We are bored silly with the lies and threats from both camps. Surely, the Electoral Commission or the Office of National Statistics could produce an analysis of the strengths and weaknesses of staying in or leaving? Perhaps as they are doing it they could pop along and fill in our ballot papers for us. The EU referendum is so important to us as a nation. If we vote to come out or ‘Brexit’ the UK will fall. Scotland, a very big fan of the EU will push for independence. So might England. This would be calamitous for Wales and Northern Ireland. The English question has rarely been raised in discussions of “What-If?”. What if the Labour Party created its own independent English Labour Party on a par with the Scottish Labour Party? What if UKIP re-branded itself if not the English Nationalists, but the English

culminated in the fall of the republic. However, some historians maintain that Caesar could not stand that day because he was suffering from a humiliating bout of diarrhœa, a symptom of his secret, stigmatised, and chronic lifelong epilepsy. When the Secretary of State for Work and Pensions, Iain Duncan Smith (IDS), recently resigned from the Cabinet, many believed that it would lead Tory MPs to cry havoc and let slip the dogs of war. However, the so-called ‘IDS of March’ hasn’t really lived up to its billing. Comparing the resignation of IDS, with the turmoil which followed the death of Caesar is, of course, in equal parts jest and journalistic wishful thinking. However, it also shows just how adept the Government leadership duo, Cameron and Osborne, have become at hurdling the obstacles which so frequently tripped up New Labour. Since the Government has agreed to reconsider the most fractious elements of the Budget, including cuts to £1.3 billion worth of disability benefits, the ‘tampon tax’, and VAT increases on renewables, MPs have subsequently voted in favour

of the Chancellor’s budget which only days ago was considered as toxic as the ‘omnishambles’ budget of 2012. Additionally, many believe the new DWP Secretary, Stephen Crabb, because he grew up on a council estate and didn’t go to Eton, will thereby, hopefully quell the argument that government cuts are being imposed by a privileged elite. While the storm over the IDS resignation appears to have blown over, his appearance on The Andrew Marr Show only redoubled the accusations that he actually left the cabinet to strengthen his EU referendum campaign, or as part of a leadership putsch. Though on Marr, IDS denied this, many still believe that the damage his resignation did to George Osborne’s fiscal credibility have all but eliminated the Chancellor from leadership contention when David Cameron steps down. Bookmakers William Hill, for example have doubled the odds of Osborne becoming the next leader, from 2/1 to 4/1. Mayor of London, Boris Johnson, who is the favourite to become leader, said on ITV’s The Agenda that Iain Duncan Smith’s resignation was actually just “a storm in a teacup.”

There’s something cooking in the Westminster village.

he Tories have begun to throw fat on the fire over the EU referendum whilst separately turning the gas up on George Osborne. Labour, their political opponents (now there’s an oxymoron) have missed these

Shortly before his assassination, the Roman senate declared Julius Caesar “dictator in perpetuity” and went to inform him about the good news. Caesar did not stand to greet them which apparently caused such offence that many believe it was this faux pas that precipitated the civil war which

Europe: the Heat is on

Democratic Party? What if simply the English said enough’s enough? Could it be that a vote to come out of the EU might lead to England wanting its own independence? How would Wales, Scotland and Northern Ireland respond? These are questions which have not yet been addressed inside the Westminster bubble. But with a disunited Tory Party who want to see Cameron replaced after the referendum, frankly anything could happen. For sure there will be another run on the £. In these times of increased uncertainty in the world my sense is it would be wiser to resolve our own issues before becoming the first nation to leave the EU.

However you feel - do check you are registered to vote and do actually vote!

Johnson denied suggestions that the resignation was motivated by either the coming EU referendum, or that it was part of Johnson’s own ambitions to become PM. He concluded by advising that “it would have been much better, quite frankly, if he had stayed in and fought his point of view from within the cabinet,” he said. Before concluding: “That’s always the best thing.” Expectations that the Opposition Labour party would capitalise on a memorably bad week for both the Conservative party, and the Chancellor in particular, likewise never materialised, as a leaked document charting the loyalty of Labour’s own MPs to leader, Jeremy Corbyn, was used to deflect criticism back onto the opposition. Labour MP, John Woodcock, tweeted to complain about the failure to exploit one of the worst weeks for the Conservatives, calling the list a “f****** disaster” which made the party a “laughing stock.” Woodcock subsequently deleted the tweet, explaining that he ‘ineptly’ meant to send the message to a colleague as a private message. 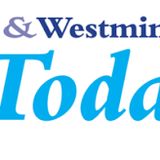