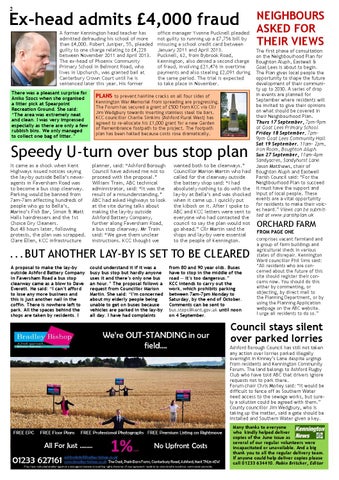 Ex-head admits £4,000 fraud A former Kennington head teacher has admitted defrauding his school of more than £4,000. Robert Juniper, 55, pleaded guilty to one charge relating to £4,228 between November 2011 and April 2013. The ex-head of Phoenix Community Primary School in Belmont Road, who lives in Upchurch, was granted bail at Canterbury Crown Court until he is sentenced later this year. His former There was a pleasant surprise for Aniko Szocs when she organised a litter pick at Spearpoint Recreation Ground. She said: “The area was extremely neat and clean. I was very impressed especially as there are only a few rubbish bins. We only managed to collect one bag of litter.”

office manager Yvonne Pucknell pleaded not guilty to running up a £7,756 bill by misusing a school credit card between January 2011 and April 2013. Pucknell, 62, from Bybrook Road, Kennington, also denied a second charge of fraud, involving £21,476 in overtime payments and also stealing £2,091 during the same period. The trial is expected to take place in November.

PLANS to prevent hairline cracks on all four sides of Kennington War Memorial from spreading are progressing. The Forum has secured a grant of £500 from KCC via Cllr Jim Wedgbury towards inserting stainless steel tie bars. KCC councillor Charlie Simkins (Ashford Rural West) has agreed to re-allocate his £1,000 grant for a new Garden of Remembrance footpath to the project. The footpath plan has been halted because costs rose dramatically.

Speedy U-turn over bus stop plan It came as a shock when Kent Highways issued notices saying the lay-by outside Bella’s newsagents in Faversham Road was to become a bus stop clearway. Parking would be banned from 7am-7am affecting hundreds of people who go to Bella’s, Marino’s Fish Bar, Simon & Matt Halls hairdressers and the 1st Choice Dry Cleaners. But 48 hours later, following protests, the plan was scrapped. Clare Ellen, KCC infrastructure

planner, said: “Ashford Borough Council have advised me not to proceed with the proposal.” William Train, ABC technical administrator, said: “It was the result of a misunderstanding.” ABC had asked Highways to look at the site during talks about making the lay-by outside Ashford Battery Company, further along Faversham Road, a bus stop clearway. Mr Train said: “We gave them unclear instructions. KCC thought we

wanted both to be clearways.” Councillor Marion Martin who had called for the clearway outside the battery shop said: “I had absolutely nothing to do with the lay-by at Bella’s and was shocked when it came up. I quickly put the kibosh on it. After I spoke to ABC and KCC letters were sent to everyone who had contacted the council to say the plan would not go ahead.” Cllr Martin said the shops and lay-by were essential to the people of Kennington.

. . . BUT ANOTHER LAY-BY IS SET TO BE CLEARED A proposal to make the lay-by outside Ashford Battery Company in Faversham Road a bus stop clearway came as a blow to Dave Everett. He said: “I can’t afford to lose any more business and this is just another nail in the coffin. There is nowhere left to park. All the spaces behind the shops are taken by residents. I

could understand it if it was a busy bus stop but hardly anyone uses it and there’s only one bus an hour.” The proposal follows a request from Councillor Marion Martin. She said: “I’m concerned about my elderly people being unable to get on buses because vehicles are parked in the lay-by all day. I have had complaints

from 80 and 90 year olds. Buses have to stop in the middle of the road — it’s too dangerous.” KCC intends to carry out the work, which prohibits parking between 7am-7pm Monday to Saturday, by the end of October. Comments can be sent to bus.stops@kent.gov.uk until noon on 4 September.

NEIGHBOURS ASKED FOR THEIR VIEWS The first phase of consultation on the Neighbourhood Plan for Boughton Aluph, Eastwell & Goat Lees is about to begin. The Plan gives local people the opportunity to shape the future development of their community up to 2030. A series of drop in events are planned for September where residents will be invited to give their opinions on what should be covered in their Neighbourhood Plan. Thurs 17 September, 7pm-9pm at Goat Lees Primary School. Friday 18 September, 7pm9pm Goat Lees Community Hall. Sat 19 September, 11am- 2pm, Iron Room, Boughton Aluph. Sun 27 September, 11am-4pm Sandyacres, Sandyhurst Lane. Jason Matthews, chair of Boughton Aluph and Eastwell Parish Council said: “For the Neighbourhood Plan to succeed it must have the support and input of local people. These events are a vital opportunity for residents to make their voices heard.” Views can be submitted at www.parishplan.uk

ORCHARD FARM FROM PAGE ONE comprises vacant farmland and a group of farm buildings and agricultural sheds in various states of disrepair. Kennington Ward councillor Phil Sims said: “All residents who are concerned about the future of this site should register their concerns now. You should do this either by commenting, or objecting, by direct mail to the Planning Department, or by using the Planning Application webpage on the ABC website. I urge all residents to do so.”

Council stays silent over parked lorries Ashford Borough Council has still not taken any action over lorries parked illegally overnight in Kinney’s Lane despite urgings from residents and Kennington Community Forum. The land belongs to Ashford Rugby Club who have told ABC that drivers ignore requests not to park there. Forum chair Chris Morley said: “It would be difficult to fence off as Southern Water need access to the sewage works, but surely a solution could be agreed with them.” County councillor Jim Wedgbury, who is taking up the matter, said a gate should be installed and Southern Water given a key. Many thanks to everyone who kindly helped deliver copies of the June issue as several of our regular volunteers were incapacitated or unavailable. And a big thank you to all the regular delivery team. If anyone could help deliver copies please call 01233 634410. Robin Britcher, Editor 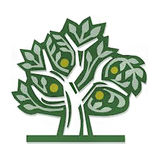