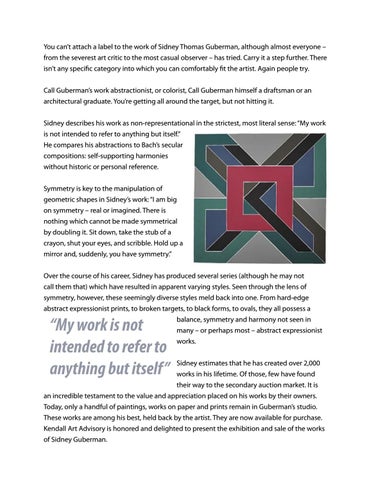 You can’t attach a label to the work of Sidney Thomas Guberman, although almost everyone – from the severest art critic to the most casual observer – has tried. Carry it a step further. There isn’t any specific category into which you can comfortably fit the artist. Again people try. Call Guberman’s work abstractionist, or colorist, Call Guberman himself a draftsman or an architectural graduate. You’re getting all around the target, but not hitting it. Sidney describes his work as non-representational in the strictest, most literal sense: “My work is not intended to refer to anything but itself.” He compares his abstractions to Bach’s secular compositions: self-supporting harmonies without historic or personal reference. Symmetry is key to the manipulation of geometric shapes in Sidney’s work: “I am big on symmetry – real or imagined. There is nothing which cannot be made symmetrical by doubling it. Sit down, take the stub of a crayon, shut your eyes, and scribble. Hold up a mirror and, suddenly, you have symmetry.” Over the course of his career, Sidney has produced several series (although he may not call them that) which have resulted in apparent varying styles. Seen through the lens of symmetry, however, these seemingly diverse styles meld back into one. From hard-edge abstract expressionist prints, to broken targets, to black forms, to ovals, they all possess a balance, symmetry and harmony not seen in many – or perhaps most – abstract expressionist works. Sidney estimates that he has created over 2,000 works in his lifetime. Of those, few have found their way to the secondary auction market. It is an incredible testament to the value and appreciation placed on his works by their owners. Today, only a handful of paintings, works on paper and prints remain in Guberman’s studio. These works are among his best, held back by the artist. They are now available for purchase. Kendall Art Advisory is honored and delighted to present the exhibition and sale of the works of Sidney Guberman.