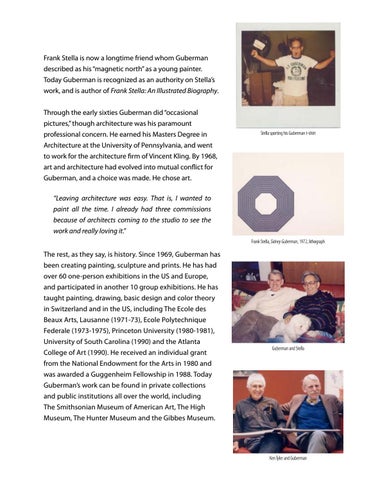 Frank Stella is now a longtime friend whom Guberman described as his “magnetic north” as a young painter. Today Guberman is recognized as an authority on Stella’s work, and is author of Frank Stella: An Illustrated Biography. Through the early sixties Guberman did “occasional pictures,” though architecture was his paramount professional concern. He earned his Masters Degree in Architecture at the University of Pennsylvania, and went to work for the architecture firm of Vincent Kling. By 1968, art and architecture had evolved into mutual conflict for

Guberman, and a choice was made. He chose art. “Leaving architecture was easy. That is, I wanted to paint all the time. I already had three commissions because of architects coming to the studio to see the work and really loving it.” Frank Stella, Sidney Guberman, 1972, lithograph

The rest, as they say, is history. Since 1969, Guberman has been creating painting, sculpture and prints. He has had over 60 one-person exhibitions in the US and Europe, and participated in another 10 group exhibitions. He has taught painting, drawing, basic design and color theory in Switzerland and in the US, including The Ecole des Beaux Arts, Lausanne (1971-73), Ecole Polytechnique Federale (1973-1975), Princeton University (1980-1981), University of South Carolina (1990) and the Atlanta College of Art (1990). He received an individual grant from the National Endowment for the Arts in 1980 and was awarded a Guggenheim Fellowship in 1988. Today Guberman’s work can be found in private collections and public institutions all over the world, including The Smithsonian Museum of American Art, The High Museum, The Hunter Museum and the Gibbes Museum.