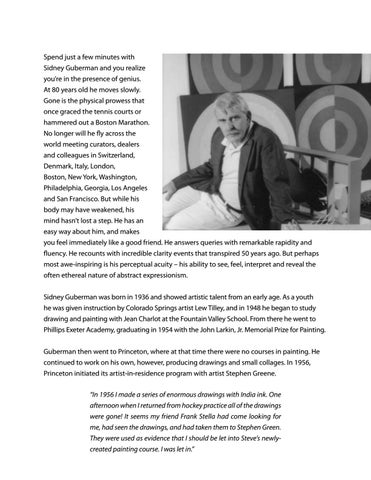 Spend just a few minutes with Sidney Guberman and you realize you’re in the presence of genius. At 80 years old he moves slowly. Gone is the physical prowess that once graced the tennis courts or hammered out a Boston Marathon. No longer will he fly across the world meeting curators, dealers and colleagues in Switzerland, Denmark, Italy, London, Boston, New York, Washington, Philadelphia, Georgia, Los Angeles and San Francisco. But while his body may have weakened, his mind hasn’t lost a step. He has an easy way about him, and makes you feel immediately like a good friend. He answers queries with remarkable rapidity and fluency. He recounts with incredible clarity events that transpired 50 years ago. But perhaps most awe-inspiring is his perceptual acuity – his ability to see, feel, interpret and reveal the often ethereal nature of abstract expressionism. Sidney Guberman was born in 1936 and showed artistic talent from an early age. As a youth he was given instruction by Colorado Springs artist Lew Tilley, and in 1948 he began to study drawing and painting with Jean Charlot at the Fountain Valley School. From there he went to Phillips Exeter Academy, graduating in 1954 with the John Larkin, Jr. Memorial Prize for Painting. Guberman then went to Princeton, where at that time there were no courses in painting. He continued to work on his own, however, producing drawings and small collages. In 1956, Princeton initiated its artist-in-residence program with artist Stephen Greene. “In 1956 I made a series of enormous drawings with India ink. One afternoon when I returned from hockey practice all of the drawings were gone! It seems my friend Frank Stella had come looking for me, had seen the drawings, and had taken them to Stephen Green. They were used as evidence that I should be let into Steve’s newlycreated painting course. I was let in.”