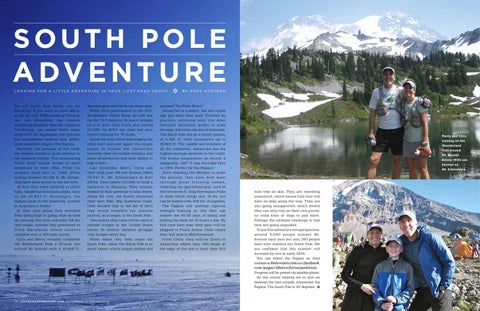 south pole a dv e n t u r e looking for a lit tle adventure in your life? he ad south .

We a l l k now t hat lo ok s c a n b e deceiving. If you were to meet Marty at his job with F5Networks or Chris as she was presenting the creative consulting available from her company ThinkShop, you would likely come away with the impression that you had just encountered another nice, polite, quiet suburban couple—the Fagans. However, the persona of the workday Fagans stands in stark contrast to the weekend version. This unassuming North Bend couple seems to have adventure in their DNA. From the moment they met i n 1988 wh i le scaling Alaska’s 20,320 ft. Mt. Denali, they have been active to the extreme. At first they were satisfied to climb high, dangerous mountain peaks, such as the 22,837 f t. Aconcag ua, the highest peak in the Americas, located in Argentina’s Andes. In their next phase they switched from going high to going wide as took up running. Not your everyday 10k for this couple, instead they gravitated to U lt ra Ma rat hon s wher e r u n ner s complete over a 100 mile course. Chris and Marty recently completed the Wonderland Trail a 93-mile run around Mt Rainier with a 25,000 ft.

elevation gain and loss in just three days. When Chris participated in the 2011 Snoqualmie Valley Relay for Life she ran for 73.5 miles in 16 hours straight on a ½ mile oval track and raised $3,300. In 2012 she beat her own record running for 76 miles. About the time Chris was looping the track over and over again the couple began to realize the con nection between their incredible stamina and sense of adventure and their ability to help others. Last December Marty, Chris and their nine year old son Keenan hiked 19,341 ft. Mt. Kilimanjaro in East Africa. They raised $12,000 to build a classroom in Tanzania. They became hooked on their potential to help others. Along the way, the family discussed their next BAG (Big Audacious Goal). They decided that in the fall of 2013 they would complete the arduous journey, as a couple, to the South Pole. The money they raise will be used to combat hunger in the United States where 16 million children struggle with hunger every day. When asked why they chose the South Pole—when the North Pole is so much closer—Chris simply smiled and

quipped “No Polar Bears.” Antarctica is a desert, but one unlike any you have ever seen. Covered by glac ier s, a l low i ng on ly t he most elevated mountain peaks to poke through, it is twice the size of Australia. The South Pole sits on a windy plateau at 9,301 ft. with mountains up to 16,864 ft. The coldest and windiest of all the continents, Antarctica has the highest average elevation in the world. The lowest temperature on record, a staggering -129° F was recorded here in 1984. Perfect for the Fagans! Since reaching the decision to make the journey, they have both been through polar training camps, collecting the specialized gear, such as the two seven ft. long Norwegian Pulks or sleds which weigh only 10 lbs. but can be loaded with 200 lbs. of supplies. The Fagans will undergo rigorous strength training so that they can endure the 45-50 days of skiing and pulling the sleds for 10 hours a day. By this time next year their gear will be shipped to Punta Arena, Chile where they will land in Mid-November. From Chile, they will be f lown to Antarctica where they will begin at the edge of the sea to start their 553

Marty and Chris training on the Wonderland Trail around Mt. Rainier. Below: With son Keenon on Mt. Kilimanjaro

mile trek on skis. They are travelling unassisted, which means that they will have no help along the way. They are also going unsupported, which means they can only rely on their own power, no wind kites or dogs to pull them. Perhaps the ultimate challenge is that they are going unguided. To put this adventure into perspective, around 5,000 people summit Mt. Everest each year but only 350 people have ever reached the South Pole. We are confident that this number will increase by two in early 2014. You can follow the Fagans on their website at 3belowzero.com and facebook. com/pages/3BelowZeroexpedition.

Progress will be posted via satellite phone. As the winter months set in and we bemoan the rain outside, remember the Fagans. The South Pole is -87 degrees. ❖ 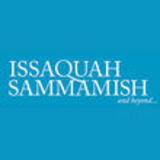