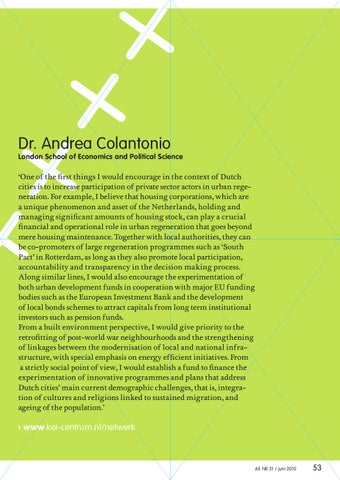 ÔOne of the Þrst things I would encourage in the context of Dutch cities is to increase participation of private sector actors in urban regeneration. For example, I believe that housing corporations, which are a unique phenomenon and asset of the Netherlands, holding and managing signiÞcant amounts of housing stock, can play a crucial Þnancial and operational role in urban regeneration that goes beyond mere housing maintenance. Together with local authorities, they can be co-promoters of large regeneration programmes such as ÔSouth PactÕ in Rotterdam, as long as they also promote local participation, accountability and transparency in the decision making process. Along similar lines, I would also encourage the experimentation of both urban development funds in cooperation with major EU funding bodies such as the European Investment Bank and the development of local bonds schemes to attract capitals from long term institutional investors such as pension funds. From a built environment perspective, I would give priority to the retroÞtting of post-world war neighbourhoods and the strengthening of linkages between the modernisation of local and national infrastructure, with special emphasis on energy efÞcient initiatives. From a strictly social point of view, I would establish a fund to Þnance the experimentation of innovative programmes and plans that address Dutch citiesÕ main current demographic challenges, that is, integration of cultures and religions linked to sustained migration, and ageing of the population.Õ

Magazine over stedelijke vernieuwing in Nederland 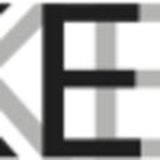