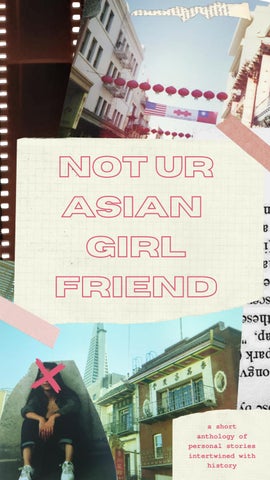 not ur Asian girl friend

a short anthology of personal stories intertwined with history

Table of Contents 3 Letter from the Author 3-4 &quot;I Am&quot; 5 A Thank You Letter to American Imperialism 6-8 Actually No One Wanted Me to Be a Nurse 9 Our Bodies Were Wanted, But We Were Not 10-11 Born in China(Town) 12 I Am My Ancestors&#39; Most Mediocre Dreams 13 Closing

Letter from the Author

Firstly, I have no idea what I am doing so thank you for taking the time to read my zine. Secondly, as the sole creator, I wanted to explain the purpose and vision behind this zine. White Sexual Imperialism and the trope of the submissive, kind Asian girlfriend has haunted me and my fellow Asian American sisters for far too long. The idea of the “asian girlfriend” reinforces not only white supremacy, but the patriarchy as well and I am tired of people thinking I am a side piece to their story. The following anecdotes are my takes on unlearning these systems, learning my cultural history, and figuring out who I am. I hope that as you read through my stories, you will be able to find some comfort, knowledge, and humor in them. Oh, and I’m not interested in being your asian girlfriend.

m IA Is my existence only for consumption? Like the fortune cookies in your takeout The girls used for sex and seduction A diversity token used for clout

Am I the lesbian on your late-night vice? Or the Filipino bride you brought here? Perhaps I am the MSG in your fried rice, Chewed, swallowed, left to disappear

But, like the MSG in your fried rice, I can be added to a multitude of things I am more than an object, a paradise Free from your idealizations, tied to no strings

Dear American Imperialism, I just wanted to say thank you for taking the Philippines under your wing. When you decided to seize my motherland in 1898, exploit its land and people, and implement the idea of benevolent assimilation, it truly was for the better. Thanks to your missionaries, military, and politicians - the Philippines was able to peacefully transition from an uncivilized society to one perfect for serving the United States. In fact, I would like to thank the American military for what they did for the Filipino people. Instead of granting us American citizenship, you did us one better by giving Filipinos an unequal legal classification that granted us &quot;ward&quot; status. And because of this, we were the only Asias allowed to serve in the U.S. navy. My uncles served your nation and you rewarded the whole family with the greatest gift anyone could ever receive, permission to join the world&#39;s greatest empire. If it wasn&#39;t for you and your need to exploit and inflict violence on foreign nations then my family might have never made their way to America. So thanks again for everything you&#39;ve done for me and my family. I owe you one!

ActuallY, NO one Wanted me to be a Nurse

In the Filipino homogeneity of Daly City, the stories of parents wanting their children to become nurses were inevitable. My friends were haunted by the cries and pleas of their parents berating them to study hard, to take AP Bio and Human Anatomy, and to eventually major in anything that would put them on the pre-med track. Luckily, like I said, we live in the homogeneity of Daly City, so we were practically born into a pre-med support group. Respectfully, that could never be me. Of course, I felt for my friends and shared their frustrations towards their parents. This was the 21st century! If your child wants a B.A. in Scandinavian Studies instead of whatever major looks best on an application to med school then so be it. I just could never fully relate to their frustrations because growing up so I was never pressured into becoming a nurse. That might have been a drag at my intelligence, my awfully shaky hands, or my weak stomach, but perhaps it was the fact that my parents never went to college and did not have to be reliant on labor for citizenship. My dad was born here and my mom can thank the U.S. Military Machine for citizenship. So. why do all the other well-meaning Filipinx parents want their children to be nurses? Besides the obvious benefits of having a good paying iob, the relationship between nursing and the Filipinx community goes all the way back to the early 20th century. When the Phillipines became a U.S. colony in 1898, the U.S. placed a nursing program in the country. This program trained Filipinos to become American nurses and even included English instruction. In turn. this would lead to policies such as the Exchange Visitor Program and the Immigration and Nationality Act of 1965. The goal of the Exchange Visitor Program was to allow foreign

professionals to come to the U.S. for years to help spread American democracy across the world, and the goal of the Immigration and Nationality Act was to remedy the shortage of nurses in the nation. Filipino nurses became the hottest commodity in the United States. So, what? Are we supposed to tell the multiple generations of Filipino nurses that their hard work and dedication to a practice we most definitely need is just a result of U.S. colonialism and Westward expansion? That nursing was only introduced in the Philippines to &quot;civilize&quot; the masses of Brown folks, Americans so badly wanted to use? THEIR PASSIONS ARE JUST THE RESULT OF MANIFEST DESTINY? No, I mean, unless you wanted to have profanities thrown at you in Tagalog then I&#39;m not sure if that would be the best course of action. However, I think it is important for the future generations to acknowledge the role U.S. colonialism plays in our cultural past and present. Once we decolonize our mindsets and practices then we can start to move towards a more equitable future, free from the unjust past and maybe even the loving nagging of our parents.

OUR Bodies Were Wanted but we Were not I love public transportation! I love my rides on Bart, Muni, and even not very effective Samtrans. However, I can not help but feel a twinge of sadness when I am on public transportation because it reminds me of what brought my Chinese family here in the first place. The transcontinental railroad was the largest engineering project of its time and crucial for developing the American West and connecting the continent. And it was all made possible because my ancestors and countless other Chinese laborers were exploited. Hundreds died from disease, explosions, landslides, and other deadly accidents. Praised by industrialists as a plentiful source of cheap, available labor, the Chinese workers were able to build one of the greatest technological advancements and help develop the lumber, fishing, mining, and agriculture industries of the West. It is estimated that 90% of the workforce was compromised of Chinese workers. Eventually, after the completion of the railroad, many Chinese laborers moved to California in search of opportunity. The rush of Chinese immigrants combined with the economic instability of the era, led to the creation of the Yellow Peril Narrative. I wish I had more to say about my Chinese ancestors, but their stories and voices were erased. Their lives were reduced to numbers. Their bodies were reduced to labor. Their ethnicity was reduced to a race which was then weaponized against them.

My dad was born somewhere very far away and by very far away, I mean forty minutes away from our current home. He was born in San Francisco, California and if we really want to get into specifics, he was ironically born in Chinatown. A few years later, my dad and his family would move to Bernal Heights. By the time my father was exploring Bernal Heights, the Yellow Peril narrative had retired and the Model Minority Myth was taking its place.

Model Minority (noun): A model minority is a minority demographic whose members are perceived to achieve a higher degree of socioeconomic success than the population average, thus serving as a reference group to outgroups.

Unfortunately, like many Asian Americans, my family fell victim to the Model Minority Myth. My Yeh Yeh worked for the U.S. Postal Service, my aunts went to Lowell High School,and my dad tells me stories of his mom desperately trying to pack American lunches for him. Whether they knew it or not, they were desperately trying to fit the model minority myth. Till this day, the myth runs strong through my family. My dad argues with me, stating Asian people work hard and we deserve all the success that we have accumulated over the years. That Asian people are good citizens and it is not our fault that other minoritized communities continue to suffer under white supremacy. I try my best to explain to him that this is exactly what the ancient white people who created our systems and institutions would have wanted us to think! We are still being exploited by the system! The model minority myth only exists to further divide minoritized communities from uniting and overthrowing white supremacy.

I am my AncestorS&#39; Most mediocre dreams I always think it is funny when people say they are their ancestors&#39; wildest dreams because I am sure our ancestors have widely different ideas of what their future generations would be doing. Personally, I do not think my ancestors would be thrilled about me. Why? I am queer, I am majoring in English (the language of the people I have been talking shit about for the last few pages), and I pay absurd amounts of money to try &quot;Asian Fusion Cuisine.&quot; To be frank, I don&#39;t really care about what my ancestors think about me. I care more about how my future offspring will view me. And it is not because I have no respect for my ancestors, it is just that there is little I can do for the past besides writing about it, but I know I can shape the present and future. I try my best to take advantage of opportunities my ancestors and parents were never given. I take advantage of every academic opportunity I see because no one in my family went to college. I take advantage of every social justice opportunity I see because my ancestors had their voices taken away. I take advantage of every opportunity to get upset at a white person because their ancestors ruined everything and my ancestors never had the chance to hurl expletives at them. I want the future to see that I was able to unlearn and overcome the past traumas and pain that inherently shaped me. I want them to speak for those who could not. I often say I am not good at ending things and writing conclusions, but this is not an end and there are still words left to be said and things left to be done. So I&#39;ll leave it at that and maybe, I do care a little about what my ancestors think of me.

Closing Thank you to Mr. P for guiding and giving me the opportunity to create something unique and personal to me. And to anyone else reading this, thank you for listening to my stories.