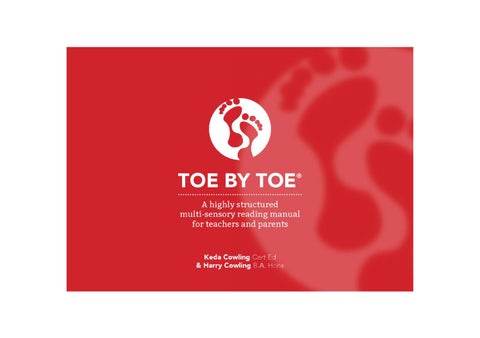 In the majority of our word building exercises we need to know that a student can read a word correctly on three separate occasions. If a student does not know a word or reads a word incorrectly, we place a dot in the appropriate box. Crosses are forbidden. People with learning difficulties are too familiar with crosses; they symbolise failure. A word read correctly earns a tick or a stroke. The book is designed to promote daily progress as follows: Day 1 1. Place the date in the boxes at the top of the grid. Our example starts on the fifth of September. 2. Ask the student to read the letter sounds or words in the column, ticking or dotting as you move down. 3. When you have completed one column, move to the next column and ask the student the letter sounds or words. Once more, tick or dot the letter sounds or words. 4. Continue as above for a period of no longer than 20 minutes. Day 2 and Day 3 Go to the page on which you started Day 1. Write the date next to the previous day's date. Repeat checking the grid as for Day 1 Day 4 and after Repeat as previous days except that you should omit words which have 3 ticks. You may work on as many exercises as twenty minutes allow. If a word or sound has not gained three consecutive ticks by the end of an exercise (see sh in the last column of the example page) refer it to the next multi-sensory page (page 26). You will find multi-sensory pages at intervals throughout the text.

1. Always begin the dayâ&#x20AC;&#x2122;s coaching by placing the date next to the date of the previous day's exercise. 2. Progress is much quicker if the exercises are undertaken on a daily basis but it doesn't matter if you skip the odd day. 3. These are basic instructions. Each exercise has its own individual coaching tips.

TOE BY TOE Other Information Introducing 'Polynons' & Syllable Division The term 'Polynons' describes words which are both polysyllabic and meaningless. Their only function is to serve the needs of word-building and syllable division. Syllable division must be a multi-sensory activity; requiring students to divide words physically with a pencil stroke before they can undertake the reading of polysyllabic words.

PAGE 62 Coach Look at the words in the shaded area of the exercise. The words have been divided according to Toe by Toe's rules for syllable division. The rule is: Starting from the left, look for the first vowel, take the consonant to the right of it and divide. Twin consonants count as one letter. The Polynons in the shaded area are examples only. Make sure that your student works in the unshaded columns on the right. Ask the student to draw the dividing lines with a pencil. You may have to rub out the lines until the student becomes familiar with the rules. This is not a reading exercise. Dividing the Polynons is all that is required. This is an important exercise which will be expanded later. It seems more complex than it is. It may help you to copy some of the polynons on to scrap paper and attempt to divide them yourself. Dates are not required but you must keep returning to the exercise until the student knows how to divide correctly.

Column 2 The rule is: find the consonant after the vowel and divide. Use a pencil.

Other Information 'ed' at the end of a word Most people never consider the choice of sounds incumbent upon these letters or the problems they cause people with reading difficulties. Once again we could introduce a complicated set of rules. For example: 'ed' after 'ch' always makes a 't' sound. Why burden the coach and pupil? Real words cannot be read correctly with an inappropriate 'ed' ending. The word itself determines the choice.

Coach The letters ed at the end of a word make one of three sounds. Listen to the sound made by the bold letters in the following words.

pland Listen carefully to the sounds made by the examples. The word pushed like the word reached can only adopt one sound. The student will select the ending which follows naturally. Words sharing the same ending have been paired. The three tick rule applies.

Other Information 'tion, sion, cial, tial, cian' Polynons are not appropriate for this exercise. The only prerequisite for reading real words is the ability to recognise word endings quickly. Some students may struggle to perfect the pronunciation when they tackle column A but the real words will establish this very quickly.

Coach Listen to the sounds made by the bold letters in the following words:

This time the bold letters say sh'l; which is rather like the word shall without the vowel. Establish the sounds by repeating the words. Ask the student to read the word endings listed in pairs in column A. When you are confident that s/he can read them quickly and correctly you may move to the next columns of real words. If your student has difficulty with a word you can ask them to try both sounds of the vowel. Most difficulties will arise when the student reads a word such as 'lotion' and gives the first o its short sound. Remember: In the word columns both words must be read correctly to earn a tick. Coached words receive a dot.

TOE BY TOE A