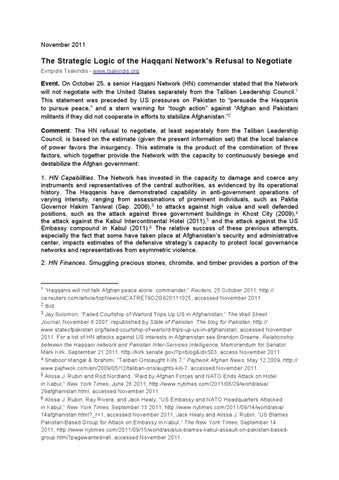 The Strategic Logic of the Haqqani Network’s Refusal to Negotiate Evripidis Tsakiridis - www.tsakiridis.org

Event. On October 25, a senior Haqqani Network (HN) commander stated that the Network will not negotiate with the United States separately from the Taliban Leadership Council.1 This statement was preceded by US pressures on Pakistan to “persuade the Haqqanis to pursue peace,” and a stern warning for “tough action” against “Afghan and Pakistani militants if they did not cooperate in efforts to stabilize Afghanistan.”2 Comment. The HN refusal to negotiate, at least separately from the Taliban Leadership Council, is based on the estimate (given the present information set) that the local balance of power favors the insurgency. This estimate is the product of the combination of three factors, which together provide the Network with the capacity to continuously besiege and destabilize the Afghan government: 1. HN Capabilities. The Network has invested in the capacity to damage and coerce any instruments and representatives of the central authorities, as evidenced by its operational history. The Haqqanis have demonstrated capability in anti-government operations of varying intensity, ranging from assassinations of prominent individuals, such as Paktia Governor Hakim Taniwal (Sep. 2006),3 to attacks against high value and well defended positions, such as the attack against three government buildings in Khost City (2009),4 the attack against the Kabul Intercontinental Hotel (2011),5 and the attack against the US Embassy compound in Kabul (2011).6 The relative success of these previous attempts, especially the fact that some have taken place at Afghanistan’s security and administrative center, impacts estimates of the defensive strategy’s capacity to protect local governance networks and representatives from asymmetric violence. 2. HN Finances. Smuggling precious stones, chromite, and timber provides a portion of the

Network’s income.7 Other sources of income include kidnapping, taxation of the population, and extortion of companies operating in areas under Haqqani control.8 The majority of its financial resources are, however, collected from international donors, mainly from Arab and Gulf states.9 In other words, to cut off HN funding, the United States and the Afghan government would have to wage both a local and an international effort. The perceived complexity of this task has a positive impact on estimates of the security of HN sources of funding. 3. Political Structure of the Operational Environment. The Haqqanis, similarly to many antigovernment organizations, have taken advantage of the complications, that the political boundary between Afghanistan and Pakistan creates on US and Afghan government freedom of action, to base a lot of its infrastructure in Pakistan.10 The political border limits the US space of unilateral offensive options to air strikes and, possibly, special operations raids. As of November 16 2011, HN controlled areas have been targeted 65 times out of 281 total US strikes in Pakistani territory.11 To this day, HN operational capability seems to have relative success in absorbing the attrition and risk that the US air strikes generate. These factors combine to provide the HN leadership with the confidence that, at least in a ceteris paribus environment, the distribution of capabilities favors the continuation of armed opposition. Unless the US significantly changes the situation in any of these aspects of the balance of power, or is prepared to concede some demands to the Taliban, then there is a negative outlook concerning the prospects for negotiations between the United States and the Haqqani Network. The Strategic Logic of the Haqqani Network’s Refusal to Negotiate

On October 25, a senior Haqqani Network (HN) commander stated that the Network will not negotiate with the United States separately from the...

The Strategic Logic of the Haqqani Network’s Refusal to Negotiate

On October 25, a senior Haqqani Network (HN) commander stated that the Network will not negotiate with the United States separately from the...