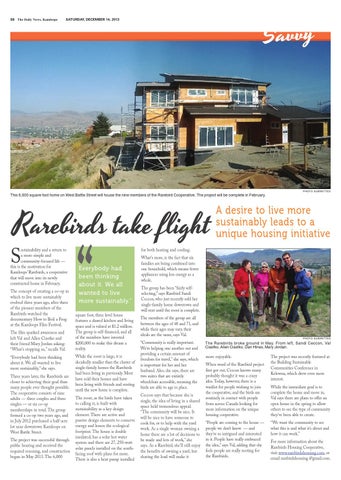 This 6,000 square foot home on West Battle Street will house the nine members of the Rarebird Cooperative. The project will be complete in February.

ustainability and a return to a more simple and community-focused life — this is the motivation for Kamloops’ Rarebirds, a cooperative that will move into its newly constructed home in February.

The concept of creating a co-op in which to live more sustainably evolved three years ago, after three of the pioneer members of the Rarebirds watched the documentary How to Boil a Frog at the Kamloops Film Festival. The film sparked awareness and left Val and Allen Ciastko and their friend Mary Jordan asking: “What’s stopping us,” recalls Val. “Everybody had been thinking about it. We all wanted to live more sustainably,” she says. Three years later, the Rarebirds are closer to achieving their goal than many people ever thought possible. The cooperative consists of nine adults — three couples and three singles — or six co-op memberships in total. The group formed a co-op two years ago, and in July 2012 purchased a half-acre lot near downtown Kamloops on West Battle Street. The project was successful through public hearing and received the required rezoning, and construction began in May 2013. The 6,000

for both heating and cooling.

Everybody had been thinking about it. We all wanted to live more sustainably.” square foot, three level house features a shared kitchen and living space and is valued at $1.2 million. The group is self-financed, and all of the members have invested $200,000 to make this dream a reality. While the roost is large, it is decidedly smaller than the cluster of single-family homes the Rarebirds had been living in previously. Most have sold their homes and have been living with friends and renting until the new home is complete. The roost, as the birds have taken to calling it, is built with sustainability as a key design element. There are active and passive design elements to conserve energy and lessen the ecological footprint. The house is double insulated, has a solar hot water system and there are 27, 250-watt solar panels installed on the southfacing roof with plans for more. There is also a heat pump installed

What’s more, is the fact that six families are being combined into one household, which means fewer appliances using less energy as a whole. The group has been “fairly selfselecting,” says Rarebird Sandi Ceccon, who just recently sold her single-family home downtown and will rent until the roost is complete. The members of the group are all between the ages of 48 and 71, and while their ages may vary, their ideals are the same, says Val. “Community is really important. We’re helping one another out and providing a certain amount of freedom for travel,” she says, which is important for her and her husband. Also, she says, there are two suites that are entirely wheelchair accessible, meaning the birds are able to age in place. Ceccon says that because she is single, the idea of living in a shared space held tremendous appeal. “The community will be nice. It will be nice to have someone to cook for, or to help with the yard work. As a single woman owning a home there are a lot of decisions to be made and lots of work,” she says. As a Rarebird, she’ll still enjoy the benefits of owning a yard, but sharing the load will make it

more enjoyable. When word of the Rarebird project first got out, Ceccon knows many probably thought it was a crazy idea. Today, however, there is a waitlist for people wishing to join the cooperative, and the birds are routinely in contact with people from across Canada looking for more information on the unique housing cooperative. “People are coming to the house — people we don’t know — and they’re so intrigued and interested in it. People have really embraced the idea,” says Val, adding that she feels people are really rooting for the Rarebirds.

The project was recently featured at the Building Sustainable Communities Conference in Kelowna, which drew even more interest. While the immediate goal is to complete the home and move in, Val says there are plans to offer an open house in the spring to allow others to see the type of community they’ve been able to create. “We want the community to see what this is and what it’s about and how it can work.” For more information about the Rarebirds Housing Cooperative, visit www.rarebirdshousing.com, or email rarebirdshousing @gmail.com.

A Magazine for the 50+ crowd. Brought to you by the Kamloops Daily News. 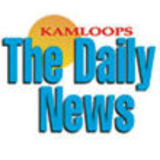