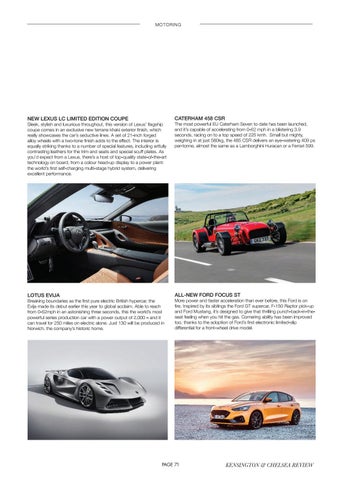 Sleek, stylish and luxurious throughout, this version of Lexus’ flagship coupe comes in an exclusive new terrane khaki exterior finish, which really showcases the car’s seductive lines. A set of 21-inch forged alloy wheels with a two-tone finish adds to the effect. The interior is equally striking thanks to a number of special features, including artfully contrasting leathers for the trim and seats and special scuff plates. As you’d expect from a Lexus, there’s a host of top-quality state-of-the-art technology on board, from a colour head-up display to a power plant: the world’s first self-charging multi-stage hybrid system, delivering excellent performance.

Breaking boundaries as the first pure electric British hypercar, the Evija made its debut earlier this year to global acclaim. Able to reach from 0-62mph in an astonishing three seconds, this the world’s most powerful series production car with a power output of 2,000 – and it can travel for 250 miles on electric alone. Just 130 will be produced in Norwich, the company’s historic home.

The most powerful EU Caterham Seven to date has been launched, and it’s capable of accelerating from 0-62 mph in a blistering 3.9 seconds, racing on to a top speed of 225 kmh. Small but mighty, weighing in at just 580kg, the 485 CSR delivers an eye-watering 409 ps per-tonne, almost the same as a Lamborghini Huracan or a Ferrari 599.

More power and faster acceleration than ever before, this Ford is on fire. Inspired by its siblings the Ford GT supercar, F‑150 Raptor pick-up and Ford Mustang, it’s designed to give that thrilling punch-back-in-theseat feeling when you hit the gas. Cornering ability has been improved too, thanks to the adoption of Ford’s first electronic limited-slip differential for a front-wheel drive model.