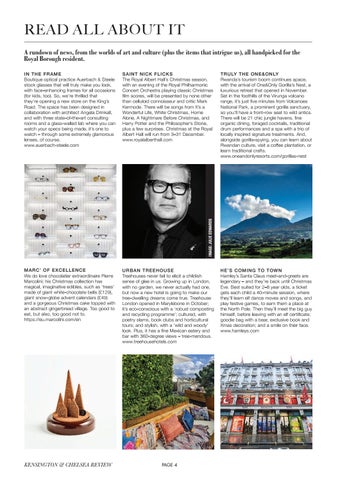 READ ALL ABOUT IT A rundown of news, from the worlds of art and culture (plus the items that intrigue us), all handpicked for the Royal Borough resident. S AI NT NI C K FL I C KS The Royal Albert Hall’s Christmas season, with an evening of the Royal Philharmonic Concert Orchestra playing classic Christmas film scores, will be presented by none other than celluloid connoisseur and critic Mark Kermode. There will be songs from It’s a Wonderful Life, White Christmas, Home Alone, A Nightmare Before Christmas, and Harry Potter and the Philosopher’s Stone, plus a few surprises. Christmas at the Royal Albert Hall will run from 3–31 December. www.royalalberthall.com

MA R C’ OF EXCELLENCE We do love chocolatier extraordinaire Pierre Marcolini; his Christmas collection has magical, imaginative edibles, such as ‘trees’ made of giant white-chocolate bells (£129), giant snow-globe advent calendars (£49) and a gorgeous Christmas cake topped with an abstract gingerbread village. Too good to eat, but also, too good not to. https://eu.marcolini.com/en

URBAN T R EEH O U SE Treehouses never fail to elicit a childish sense of glee in us. Growing up in London, with no garden, we never actually had one, but now a new hotel is going to make our tree-dwelling dreams come true. Treehouse London opened in Marylebone in October; it’s eco-conscious with a ‘robust composting and recycling programme’; cultured, with poetry slams, book clubs and horticultural tours; and stylish, with a ‘wild and woody’ look. Plus, it has a fine Mexican eatery and bar with 360-degree views – tree-mendous. www.treehousehotels.com

T R U LY TH E O N E&O N LY Rwanda’s tourism boom continues apace, with the arrival of One&Only Gorilla’s Nest, a luxurious retreat that opened in November. Set in the foothills of the Virunga volcano range, it’s just five minutes from Volcanoes National Park, a prominent gorilla sanctuary, so you’ll have a front-row seat to wild antics. There will be 21 chic jungle havens, fine organic dining, foraged cocktails, traditional drum performances and a spa with a trio of locally inspired signature treatments. And, alongside gorilla-spying, you can learn about Rwandan culture, visit a coffee plantation, or learn traditional crafts. www.oneandonlyresorts.com/gorillas-nest

IN THE FRAM E Boutique optical practice Auerbach & Steele stock glasses that will truly make you look, with face-enhancing frames for all occasions (for kids, too). So, we’re thrilled that they’re opening a new store on the King’s Road. The space has been designed in collaboration with architect Angela Drinkall, and with three state-of-the-art consulting rooms and a glass-walled lab where you can watch your specs being made, it’s one to watch – through some extremely glamorous lenses, of course. www.auerbach-steele.com

H E’ S C O MI N G TO TO WN Hamley’s Santa Claus meet-and-greets are legendary – and they’re back until Christmas Eve. Best suited for 2–8 year olds, a ticket gets each child a 40-minute session, where they’ll learn elf dance moves and songs, and play festive games, to earn them a place at the North Pole. Then they’ll meet the big guy himself, before leaving with an elf certificate; goodie bag with a bear, exclusive book and Xmas decoration; and a smile on their face. www.hamleys.com