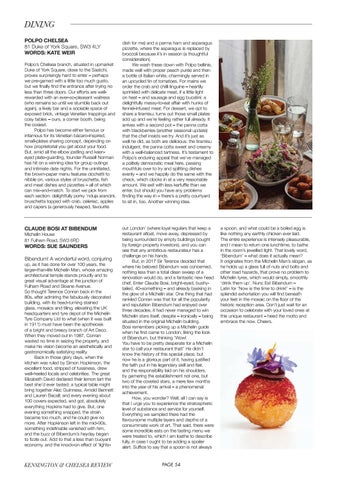 DINING POLPO CHELSEA 81 Duke of York Square, SW3 4LY WORDS: KATE WEIR Polpo’s Chelsea branch, situated in upmarket Duke of York Square, close to the Saatchi, proves surprisingly hard to enter – perhaps we pre-gamed with a little too much gusto, but we finally find the entrance after trying no less than three doors. Our efforts are wellrewarded with an ever-so-pleasant waitress (who remains so until we stumble back out again), a lively bar and a sociable space of exposed brick, vintage Venetian trappings and cosy tables – ours, a corner booth, being the cosiest. Polpo has become either famous or infamous for its Venetian bàcaro-inspired, small-plates sharing concept, depending on how proprietorial you get about your food. But, amid all the elbow jostling and keeneyed plate-guarding, founder Russell Norman has hit on a winning idea for group outings and intimate date nights. For the uninitiated, the brown-paper menu features cicchetti to nibble on, various styles of bruschetta, fish and meat dishes and pizzettes – all of which can mix-and-match. To start we pick from each section: delightfully porky ‘nduja arancini, bruschetta topped with crab, celeriac, apples and capers (a generously heaped, favourite

up, as it has done for over 100 years, the larger-than-life Michelin Man, whose amazing architectural temple stands proudly and to great visual advantage at the junction of Fulham Road and Sloane Avenue. So thought Terence Conran back in the 80s, after admiring the fabulously decorated building, with its head-turning stained glass, mosaics and tiling, elevating the UK headquarters and tyre depot of the Michelin Tyre Company Ltd to what (when it was built in 1911) must have been the apotheosis of a bright and breezy branch of Art Deco. When they moved out in 1987, Conran wasted no time in seizing the property, and make his vision become an aesthetically and gastronomically satisfying reality. Back in those glory days, when the kitchen was ruled by Simon Hopkinson, the excellent food, stripped of fussiness, drew well-heeled locals and celebrities. The great Elizabeth David declared their lemon tart the best she’d ever tasted; a typical table might bring together Alec Guinness, Arnold Bennett and Lauren Bacall; and every evening about 100 covers expected, and got, absolutely everything Hopkins had to give. But, one evening something snapped, the strain became too much, and he could give no more. After Hopkinson left in the mid-90s, something indefinable vanished with him, and the buzz of Bibendum’s heyday began to fizzle out. Add to that a less than buoyant economy, and the knock-on effect of ‘lights-

dish for me) and a parma ham and asparagus pizzette, where the asparagus is replaced by broccoli because it’s in season (a thoughtful consideration). We wash these down with Polpo bellinis, made well with proper peach purée and then a bottle of Italian white, charmingly served in an upcycled tin of tomatoes. For mains we order the crab and chilli linguine – heartily sprinkled with delicate meat, if a little light on heat – and sausage and egg bucatini: a delightfully messy-to-eat affair with hunks of fennel-infused meat. For dessert, we opt to share a tiramisu; turns out those small plates add up and we’re feeling rather full already. It arrives with a second pot – the panna cotta with blackberries (another seasonal update) that the chef insists we try. And it’s just as well he did, as both are delicious: the tiramisu indulgent, the panna cotta sweet and creamy with a well-balanced tartness. It’s testament to Polpo’s enduring appeal that we’ve managed a politely democratic meal here, passing mouthfuls over to try and splitting dishes evenly – and we happily do the same with the check, which clocks in at a very reasonable amount. We exit with less kerfuffle than we enter, but should you have any problems finding the way in – there’s a pretty courtyard to sit in, too. Another winning idea.

out London’ (where loyal regulars that keep a restaurant afloat, move away, depressed by being surrounded by empty buildings bought by foreign property investors), and you can see that any ambitious restaurateur has a challenge on his hands. But, in 2017 Sir Terence decided that where his beloved Bibendum was concerned, nothing less than a total clean sweep of a renovation would do, and a fantastic new head chef. Enter Claude Bosi, bright-eyed, bushytailed, 40-something – and already basking in the glow of a Michelin star. One thing that had rankled Conran was that for all the popularity and reputation Bibendum had enjoyed over three decades, it had never managed to win Michelin stars itself, despite – ironically – being situated in the original Michelin building. Bosi remembers picking up a Michelin guide when he first came to London, liking the look of Bibendum, but thinking ‘Wow! You have to be pretty desperate for a Michelin star to call your restaurant that!’ He didn’t know the history of this special place, but now he is a glorious part of it, having justified the faith put in his legendary skill and flair, and the responsibility laid on his shoulders, by garnering the establishment not one, but two of the coveted stars, a mere few months into the year of his arrival – a phenomenal achievement. How, you wonder? Well, all I can say is that I urge you to experience the stratospheric level of substance and service for yourself. Everything we sampled there had the flavoursome multiple layers and depths of a consummate work of art. That said, there were some incredible eats on the tasting menu we were treated to, which I am loathe to describe fully, in case I ought to be adding a spoiler alert. Suffice to say that a spoon is not always PAGE 54

a spoon, and what could be a boiled egg is like nothing any earthly chicken ever laid. The entire experience is intensely pleasurable, and I mean to return one lunchtime, to bathe in the room’s jewelled light. That lovely word, ‘Bibendum’ – what does it actually mean? It originates from the Michelin Man’s slogan, as he holds up a glass full of nuts and bolts and other road hazards, that prove no problem to Michelin tyres, which would simply, smoothly ‘drink them up’. Nunc Est Bibendum – Latin for ‘Now is the time to drink!’ – is the splendid exhortation you will find beneath your feet in the mosaic on the floor of the historic reception area. Don’t just wait for an occasion to celebrate with your loved ones at this unique restaurant – heed the motto and embrace the now. Cheers.