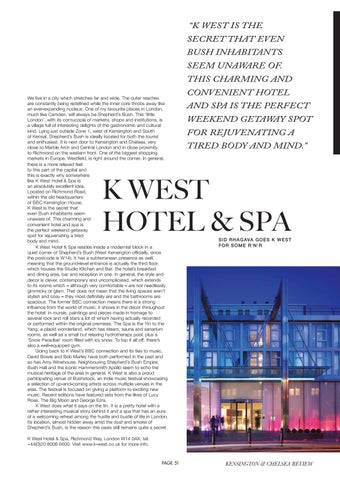 “K WEST IS THE

SECRET THAT EVEN BUSH INHABITANTS

THIS CHARMING AND We live in a city which stretches far and wide. The outer reaches are constantly being redefined while the inner core throbs away like an ever-expanding nucleus. One of my favourite places in London, much like Camden, will always be Shepherd’s Bush. This ‘little London’, with its cornucopia of markets, shops and institutions, is a village full of interesting delights of the gastronomic and cultural kind. Lying just outside Zone 1, west of Kensington and South of Kensal, Shepherd’s Bush is ideally located for both the tourist and enthusiast. It is next door to Kensington and Chelsea, very close to Marble Arch and Central London and in close proximity to Richmond on the western front. One of the biggest shopping markets in Europe, Westfield, is right around the corner. In general, there is a more relaxed feel to this part of the capital and this is exactly why somewhere like K West Hotel & Spa is an absolutely excellent idea. Located on Richmond Road, within the old headquarters of BBC Kensington House, K West is the secret that even Bush inhabitants seem unaware of. This charming and convenient hotel and spa is the perfect weekend getaway spot for rejuvenating a tired body and mind. K West Hotel & Spa resides inside a modernist block in a quiet corner of Shepherd’s Bush (West Kensington officially, since the postcode is W14). It has a subterranean presence as well, meaning that the ground-level entrance is actually the third floor, which houses the Studio Kitchen and Bar: the hotel’s breakfast and dining area, bar and reception in one. In general, the style and decor is clever, contemporary and uncomplicated, which extends to its rooms which – although very comfortable – are not needlessly gimmicky or glam. That does not mean that the living spaces aren’t stylish and cosy – they most definitely are and the bathrooms are spacious. The former BBC connection means there is a strong influence from the world of music; it shows in the decor throughout the hotel: in murals, paintings and pieces made in homage to several rock and roll stars a lot of whom having actually recorded or performed within the original premises. The Spa is the Yin to the Yang, a placid wonderland, which has steam, sauna and sanarium rooms, as well as a small but relaxing hydrotherapy pool, plus a ‘Snow Paradise’ room filled with icy snow. To top it all off, there’s also a well-equipped gym. Going back to K West’s BBC connection and its ties to music, David Bowie and Bob Marley have both performed in the past and so has Amy Winehouse. Neighbouring Shepherd’s Bush Empire, Bush Hall and the iconic Hammersmith Apollo seem to echo the musical heritage of the area in general. K West is also a proud participating venue of Bushstock, an indie music festival showcasing a selection of up-and-coming artists across multiple venues in the area. The festival is focused on giving a platform to exciting new music. Recent editions have featured sets from the likes of Lucy Rose, The Big Moon and George Ezra. K West does what it says on the tin. It is a pretty hotel with a rather interesting musical story behind it and a spa that has an aura of a welcoming retreat among the hustle and bustle of life in London. Its location, almost hidden away amid the dust and smoke of Shepherd’s Bush, is the reason this oasis still remains quite a secret.

AND SPA IS THE PERFECT

WEEKEND GETAWAY SPOT FOR REJUVENATING A