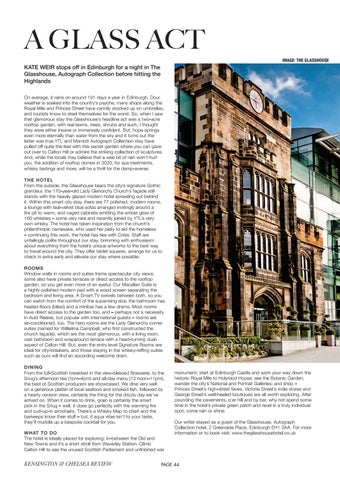 A GLASS ACT KATE WEIR stops off in Edinburgh for a night in The Glasshouse, Autograph Collection before hitting the Highlands

On average, it rains on around 191 days a year in Edinburgh. Dour weather is soaked into the country’s psyche, many shops along the Royal Mile and Princes Street have cannily stocked up on umbrellas, and tourists know to steel themselves for the worst. So, when I saw that glamorous stay the Glasshouse’s headline act was a two-acre rooftop garden, with real lawns, trees, shrubs and such, I thought they were either insane or immensely confident. But, hope springs even more eternally than water from the sky and it turns out the latter was true.YTL and Marriott Autograph Collection stay have pulled off quite the feat with this secret garden where you can gaze out over to Calton Hill or admire the striking collection of sculptures. And, while the locals may believe that a wee bit of rain won’t hurt you, the addition of rooftop domes in 2020, for spa treatments, whisky tastings and more, will be a thrill for the damp-averse. TH E HOTEL From the outside, the Glasshouse bears the city’s signature Gothic grandeur, the 170-year-old Lady Glenorchy Church’s façade still stands with the heavily glazed modern hotel sprawling out behind it. Within this smart city stay, there are 77 polished, modern rooms, a lounge with teal-velvet blue sofas arranged invitingly around a fire pit to warm, and caged cabinets emitting the amber glow of 160 whiskies – some very rare and recently joined by YTL’s very own whisky. The hotel has taken inspiration from the church’s philanthropic namesake, who used her piety to aid the homeless – continuing this work, the hotel has ties with Crisis. Staff are unfailingly polite throughout our stay, brimming with enthusiasm about everything from the hotel’s unique artworks to the best way to travel around the city. They offer tablet squares, arrange for us to check in extra early and elevate our stay where possible. ROOMS Window walls in rooms and suites frame spectacular city views; some also have private terraces or direct access to the rooftop garden, so you get even more of an eyeful. Our Macallan Suite is a highly polished modern pad with a wood screen separating the bedroom and living area. A Smart TV swivels between both, so you can watch from the comfort of the super-king size, the bathroom has heated floors (bliss!) and a minibar has a few drams. Most rooms have direct access to the garden too, and – perhaps not a necessity in Auld Reekie, but popular with international guests – rooms are air-conditioned, too. The hero rooms are the Lady Glenorchy corner suites (named for Willielma Campbell, who first constructed the church façade), which are the most glamorous, with a living room, vast bathroom and wraparound terrace with a head-turning dualaspect of Calton Hill. But, even the entry level Signature Rooms are ideal for city-breakers, and those staying in the whisky-reffing suites such as ours will find an according welcome dram. D I NING From the full-Scottish breakfast in the view-blessed Brasserie, to the Snug’s afternoon tea (1pm–4pm) and all-day menu (12 noon–11pm), the best of Scottish producers are showcased. We dine very well on a generous platter of local seafood and smoked fish, followed by a hearty venison stew, certainly the thing for the drizzly day we’ve arrived on. When it comes to drink, grain is certainly the smart pick in the Snug – well, it does go perfectly with the warming fire and curl-up-in armchairs. There’s a Whisky Map to chart and the barkeeps know their stuff – but, if aqua vitae isn’t to your taste, they’ll muddle up a bespoke cocktail for you. W H AT TO DO The hotel is ideally placed for exploring: in-between the Old and New Towns and it’s a short stroll from Waverley Station. Climb Calton Hill to see the unused Scottish Parliament and unfinished war

monument; start at Edinburgh Castle and work your way down the historic Royal Mile to Holyrood House; see the Botanic Garden; wander the city’s National and Portrait Galleries; and shop – Princes Street’s high-street faves, Victoria Street’s indie stores and George Street’s well-heeled boutiques are all worth exploring. After pounding the pavements, o’er hill and by bar, why not spend some time in the hotel’s private green patch and revel in a truly individual spot, come rain or shine. Our writer stayed as a guest of the Glasshouse, Autograph Collection hotel, 2 Greenside Place, Edinburgh EH1 3AA. For more information or to book visit: www.theglasshousehotel.co.uk