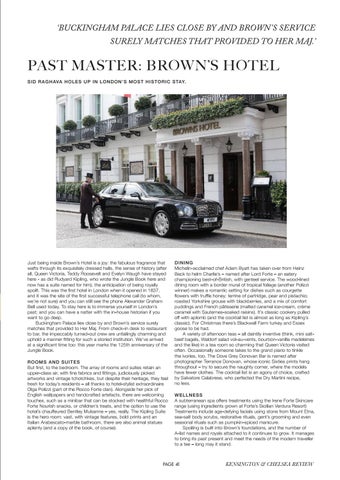 SURELY MATCHES THAT PROVIDED TO HER MAJ.’

Just being inside Brown’s Hotel is a joy: the fabulous fragrance that wafts through its exquisitely dressed halls, the sense of history (after all, Queen Victoria, Teddy Roosevelt and Evelyn Waugh have stayed here - as did Rudyard Kipling, who wrote the Jungle Book here and now has a suite named for him), the anticipation of being royally spoilt. This was the first hotel in London when it opened in 1837, and it was the site of the first successful telephone call (to whom, we’re not sure) and you can still see the phone Alexander Graham Bell used today. To stay here is to immerse yourself in London’s past; and you can have a natter with the in-house historian if you want to go deep. Buckingham Palace lies close by and Brown’s service surely matches that provided to Her Maj. From check-in desk to restaurant to bar, the impeccably turned-out crew are unfailingly charming and uphold a manner fitting for such a storied institution. We’ve arrived at a significant time too: this year marks the 125th anniversary of the Jungle Book. R O OM S AND SUIT E S But first, to the bedroom. The array of rooms and suites retain an upper-class air, with fine fabrics and fittings, judiciously picked artworks and vintage tchotchkes, but despite their heritage, they feel fresh for today’s residents – all thanks to hotel-stylist extraordinaire Olga Polizzi (part of the Rocco Forte clan). Alongside her pick of English wallpapers and handcrafted artefacts, there are welcoming touches, such as a minibar that can be stocked with healthful Rocco Forte Nourish snacks, or children’s treats, and the option to use the hotel’s chauffeured Bentley Mulsanne – yes, really. The Kipling Suite is the hero room: vast, with vintage features, bold prints and an Italian Arabescato-marble bathroom, there are also animal statues aplenty (and a copy of the book, of course).

DINING Michelin-acclaimed chef Adam Byatt has taken over from Heinz Beck to helm Charlie’s – named after Lord Forte – an eatery championing best-of-British, with genteel service. The wood-lined dining room with a border mural of tropical foliage (another Polizzi winner) makes a romantic setting for dishes such as courgette flowers with truffle honey; terrine of partridge, pear and pistachio; roasted Yorkshire grouse with blackberries, and a mix of comfort puddings and French pâtisserie (malted caramel ice-cream, crème caramel with Sauternes-soaked raisins). It’s classic cookery pulled off with aplomb (and the cocktail list is almost as long as Kipling’s classic). For Christmas there’s Blackwell Farm turkey and Essex goose to be had. A variety of afternoon teas – all daintily inventive (think, mini saltbeef bagels, Waldorf salad vol-au-vents, bourbon-vanilla madeleines and the like) in a tea room so charming that Queen Victoria visited often. Occasionally someone takes to the grand piano to tinkle the ivories, too. The Dove Grey Donovan Bar is named after photographer Terrance Donovan, whose iconic Sixties prints hang throughout – try to secure the naughty corner, where the models have fewer clothes. The cocktail list is an agony of choice, crafted by Salvatore Calabrese, who perfected the Dry Martini recipe, no less. WEL L N ESS A subterranean spa offers treatments using the Irene Forte Skincare range (using ingredients grown at Forte’s Sicilian Verdura Resort) Treatments include age-defying facials using stone from Mount Etna, sea-salt body scrubs, restorative rituals, gent’s grooming and even seasonal rituals such as pumpkin-spiced manicure. Spoiling is built into Brown’s foundations, and the number of A-list names and royals attached to it continues to grow. It manages to bring its past present and meet the needs of the modern traveller to a tee – long may it stand.