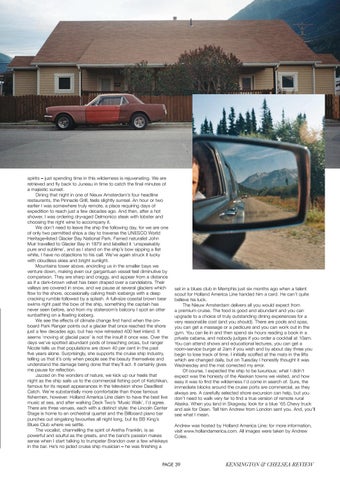 spirits – just spending time in this wilderness is rejuvenating. We are retrieved and fly back to Juneau in time to catch the final minutes of a majestic sunset. Dining that night in one of Nieuw Amsterdam’s four headline restaurants, the Pinnacle Grill, feels slightly surreal. An hour or two earlier I was somewhere truly remote, a place requiring days of expedition to reach just a few decades ago. And then, after a hot shower, I was ordering dry-aged Delmonico steak with lobster and choosing the right wine to accompany it. We don’t need to leave the ship the following day, for we are one of only two permitted ships a day to traverse the UNESCO World Heritage-listed Glacier Bay National Park. Famed naturalist John Muir travelled to Glacier Bay in 1879 and labelled it ‘unspeakably pure and sublime’, and as I stand on the ship’s bow sipping a flat white, I have no objections to his call. We’ve again struck it lucky with cloudless skies and bright sunlight. Mountains tower above, encircling us in the smaller bays we venture down, making even our gargantuan vessel feel diminutive by comparison. They are sharp and craggy, and appear from a distance as if a dark-brown velvet has been draped over a candelabra. Their valleys are covered in snow, and we pause at several glaciers which flow to the shore, occasionally calving fresh icebergs with a deep cracking rumble followed by a splash. A full-size coastal brown bear swims right past the bow of the ship, something the captain has never seen before, and from my stateroom’s balcony I spot an otter sunbathing on a floating iceberg. We see the effects of climate change first hand when the onboard Park Ranger points out a glacier that once reached the shore just a few decades ago, but has now retreated 400 feet inland. It seems ‘moving at glacial pace’ is not the insult it once was. Over the days we’ve spotted abundant pods of breaching orcas, but ranger Nicole tells us that populations are down 40 per cent in the past five years alone. Surprisingly, she supports the cruise ship industry, telling us that it’s only when people see the beauty themselves and understand the damage being done that they’ll act. It certainly gives me pause for reflection. Jazzed on the wonders of nature, we kick up our heels that night as the ship sails us to the commercial fishing port of Ketchikan, famous for its repeat appearances in the television show Deadliest Catch. We’re substantially more comfortable than those famous fishermen, however. Holland America Line claim to have the best live music at sea, and after walking Deck Two’s ‘Music Walk’, I’d agree. There are three venues, each with a distinct style: the Lincoln Center Stage is home to an orchestral quartet and the Billboard piano bar punches out singalong favourites all night long, but its BB King’s Blues Club where we settle. The vocalist, channelling the spirit of Aretha Franklin, is as powerful and soulful as the greats, and the band’s passion makes sense when I start talking to trumpeter Brandon over a few whiskeys in the bar. He’s no jaded cruise ship musician – he was finishing a

set in a blues club in Memphis just six months ago when a talent scout for Holland America Line handed him a card. He can’t quite believe his luck. The Nieuw Amsterdam delivers all you would expect from a premium cruise. The food is good and abundant and you can upgrade to a choice of truly outstanding dining experiences for a very reasonable cost (and you should). There are pools and spas, you can get a massage or a pedicure and you can work out in the gym. You can lie in and then spend six hours reading a book in a private cabana, and nobody judges if you order a cocktail at 10am. You can attend shows and educational lectures, you can get a room-service burger at 2am if you wish and by about day three you begin to lose track of time. I initially scoffed at the mats in the lifts which are changed daily, but on Tuesday I honestly thought it was Wednesday and the mat corrected my error. Of course, I expected the ship to be luxurious; what I didn’t expect was the honesty of the Alaskan towns we visited, and how easy it was to find the wilderness I’d come in search of. Sure, the immediate blocks around the cruise ports are commercial, as they always are. A carefully selected shore excursion can help, but you don’t need to walk very far to find a true version of remote rural Alaska. When you land in Skagway, look for a blue ’65 Chevy truck and ask for Dean. Tell him Andrew from London sent you. And, you’ll see what I mean. Andrew was hosted by Holland America Line; for more information, visit www.hollandamerica.com. All images were taken by Andrew Coles.