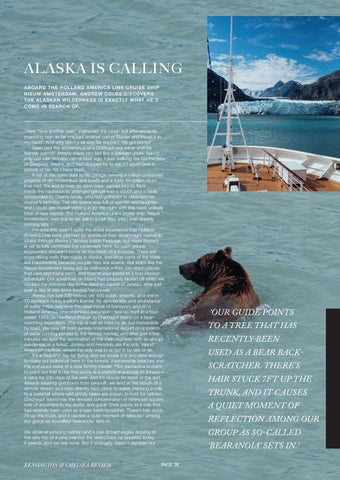 ‘Here, have another beer,’ instructed the rough but effervescently charming man as he cracked another can of Rainier and thrust it in my hand. ‘And why don’t y’all stay for supper? We got plenty!’ Dean had the appearance of a Goldrush-era miner and his friendly warmth already made him feel like a beloved uncle, but I’d only just met him one can of beer ago. I was walking the backstreets of Skagway, Alaska, and had stopped by to ask if I could take a picture of his ’65 Chevy truck. It sat at the open door to his garage, among a million unfinished projects of old motorbikes and boats and a rusty 44-gallon drum that had ‘the end is near, so drink beer’ carved into its flank. Inside the haphazardly arranged garage was a couch and a table surrounded by Dean’s family, who had gathered to celebrate his mother’s birthday. The oily space was full of warmth and laughter and I could see myself settling in for the night with this most unlikely tribe of new friends. But Holland America Line’s cruise ship, Nieuw Amsterdam, was due to set sail in a half hour and I was already running late. I’m sure this wasn’t quite the shore experience that Holland America Line have planned for guests of their seven-night roundtrip cruise through Alaska’s famous Inside Passage, but mass tourism is yet to fully penetrate the wilderness here, so such unique encounters shouldn’t come as too much of a surprise. There are more hiking trails than roads in Alaska, and large parts of the state are inaccessible because people, too, are scarce. But ships like the Nieuw Amsterdam today act as trailheads – they can reach places that cars and trains can’t, and they’re your portal to a true Alaskan adventure. Our adventure on board had properly kicked off when we docked the previous day in the Alaskan capital of Juneau, after just over a day at sea since leaving Vancouver. Alaska has just 230 towns, yet 400 public airports, and one in 70 Alaskans holds a pilot’s license. Its remoteness and abundance of water make seaplane the ideal mode of transport, and on a Holland America Line organised excursion I flew up front in a fourseater 1953 De Havilland Beaver to Chichagof Island on a bearwatching expedition. The trip is half an hour by air, but impossible by road. We take off from Juneau International Airport on a stretch of water running parallel to the tarmac runway, and after just a few minutes we spot the termination of the main highway with an abrupt cul-de-sac in a forest. Juneau and Honolulu are the only ‘island’ American capitals, where the only way in or out is by sea or air. It’s a beautiful day for flying, and we cruise low and slow enough to make out individual trees in the forests, inaccessible beaches and the v-shaped wake of a lone fishing trawler. Pilot Samantha is quick to point out that a day this sunny is a statistical anomaly in Juneau – it rains for 230 days of the year, and it’s cloudy for most of the rest. Already wearing gumboots from take-off, we land at the mouth of a remote stream and step directly from plane to water, trekking a mile to a waterfall where wild grizzly bears are known to hunt for salmon. Chichagof Island has the densest concentration of bears per square mile of anywhere in the world, and guide Chris points to a tree that has recently been used as a bear back-scratcher. There’s hair stuck 7ft up the trunk, and it causes a quiet moment of reflection among our group as so-called ‘bearanoia’ sets in.

TO A TREE THAT HAS RECENTLY BEEN

USED AS A BEAR BACKSCRATCHER. THERE’S

HAIR STUCK 7FT UP THE TRUNK, AND IT CAUSES A QUIET MOMENT OF

REFLECTION AMONG OUR GROUP AS SO-CALLED

We observe jumping salmon and a pair of bald eagles arguing at the very top of a pine tree but the bears have no appetite today, it seems, and we see none. But it strangely doesn’t dampen our