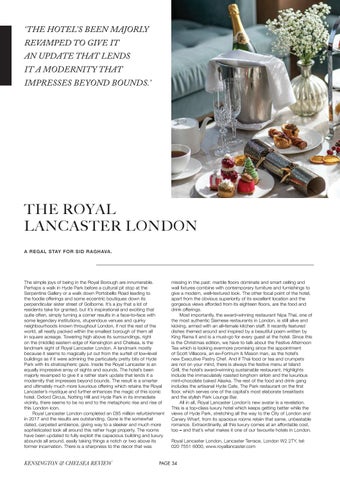 ‘THE HOTEL’S BEEN MAJORLY REVAMPED TO GIVE IT

AN UPDATE THAT LENDS IT A MODERNITY THAT

THE ROYAL LANCASTER LONDON A R EGAL STAY FOR S I D RAGHAVA.

The simple joys of being in the Royal Borough are innumerable. Perhaps a walk in Hyde Park before a cultural pit stop at the Serpentine Gallery or a walk down Portobello Road leading to the foodie offerings and some eccentric boutiques down its perpendicular sister street of Golborne. It’s a joy that a lot of residents take for granted, but it’s inspirational and exciting that quite often, simply turning a corner results in a face-to-face with some legendary institutions, stupendous venues and quirky neighbourhoods known throughout London, if not the rest of the world, all neatly packed within the smallest borough of them all in square acreage. Towering high above its surroundings, right on the (middle) eastern edge of Kensington and Chelsea, is the landmark sight of Royal Lancaster London. A landmark mostly because it seems to magically jut out from the surfeit of low-level buildings as if it were admiring the particularly pretty bits of Hyde Park with its stratospheric gaze. Inside the Royal Lancaster is an equally impressive array of sights and sounds. The hotel’s been majorly revamped to give it a rather stark update that lends it a modernity that impresses beyond bounds. The result is a smarter and ultimately much more luxurious offering which retains the Royal Lancaster’s mystique and further enhances the magic of this iconic hotel. Oxford Circus, Notting Hill and Hyde Park in its immediate vicinity, there seems to be no end to the metaphoric rise and rise of this London icon. Royal Lancaster London completed an £85 million refurbishment in 2017 and the results are outstanding. Gone is the somewhat dated, carpeted ambience, giving way to a sleeker and much more sophisticated look all around this rather huge property. The rooms have been updated to fully exploit the capacious building and luxury abounds all around, easily taking things a notch or two above its former incarnation. There is a sharpness to the decor that was

missing in the past: marble floors dominate and smart ceiling and wall fixtures combine with contemporary furniture and furnishings to give a modern, well-textured look. The other focal point of the hotel, apart from the obvious superiority of its excellent location and the gorgeous views afforded from its eighteen floors, are the food and drink offerings. Most importantly, the award-winning restaurant Nipa Thai, one of the most authentic Siamese restaurants in London, is still alive and kicking, armed with an all-female kitchen staff. It recently featured dishes themed around and inspired by a beautiful poem written by King Rama II and is a must-go for every guest at the hotel. Since this is the Christmas edition, we have to talk about the Festive Afternoon Tea which is looking evermore promising since the appointment of Scott Villacora, an ex-Fortnum & Mason man, as the hotel’s new Executive Pastry Chef. And if Thai food or tea and crumpets are not on your mind, there is always the festive menu at Island Grill, the hotel’s award-winning sustainable restaurant. Highlights include the immaculately roasted longhorn sirloin and the luxurious mint-chocolate baked Alaska. The rest of the food and drink gang includes the artisanal Hyde Cafe, The Park restaurant on the first floor, which serves one of the capital’s most elaborate breakfasts and the stylish Park Lounge Bar. All in all, Royal Lancaster London’s new avatar is a revelation. This is a top-class luxury hotel which keeps getting better while the views of Hyde Park, stretching all the way to the City of London and Canary Wharf, from its spacious rooms retain that same, unbeatable romance. Extraordinarily, all this luxury comes at an affordable cost, too – and that’s what makes it one of our favourite hotels in London. Royal Lancaster London, Lancaster Terrace, London W2 2TY, tel: 020 7551 6000, www.royallancaster.com