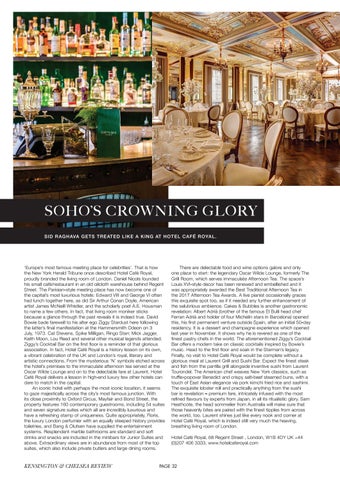 ‘Europe’s most famous meeting place for celebrities’. That is how the New York Herald Tribune once described Hotel Café Royal, proudly branded the living room of London. Daniel Nicols founded his small café/restaurant in an old oilcloth warehouse behind Regent Street. The Parisian-style meeting place has now become one of the capital’s most luxurious hotels: Edward VIII and George VI often had lunch together here, as did Sir Arthur Conan Doyle, American artist James McNeill Whistler, and the scholarly poet A.E. Housman to name a few others. In fact, that living room moniker sticks because a glance through the past reveals it is indeed true. David Bowie bade farewell to his alter ego Ziggy Stardust here following the latter’s final manifestation at the Hammersmith Odeon on 3 July, 1973. Cat Stevens, Spike Milligan, Ringo Starr, Mick Jagger, Keith Moon, Lou Reed and several other musical legends attended. Ziggy’s Cocktail Bar on the first floor is a reminder of that glorious association. In fact, Hotel Café Royal is a history lesson on its own, a vibrant celebration of the UK and London’s royal, literary and artistic connections. From the mysterious ‘N’ symbols etched across the hotel’s premises to the immaculate afternoon tea served at the Oscar Wilde Lounge and on to the delectable fare at Laurent, Hotel Café Royal delivers a lesson in high-end luxury few other hotels can dare to match in the capital. An iconic hotel with perhaps the most iconic location, it seems to gaze majestically across the city’s most famous junction. With its close proximity to Oxford Circus, Mayfair and Bond Street, the property features 160 contemporary guestrooms, including 54 suites and seven signature suites which all are incredibly luxurious and have a refreshing stamp of uniqueness. Quite appropriately, Floris, the luxury London perfumier with an equally steeped history provides toiletries, and Bang & Olufsen have supplied the entertainment systems. Resplendent marble bathrooms are standard and soft drinks and snacks are included in the minibars for Junior Suites and above. Extraordinary views are in abundance from most of the top suites, which also include private butlers and large dining rooms.

There are delectable food and wine options galore and only one place to start: the legendary Oscar Wilde Lounge, formerly The Grill Room, which serves immaculate Afternoon Tea. The space’s Louis XVI-style decor has been renewed and embellished and it was appropriately awarded the Best Traditional Afternoon Tea in the 2017 Afternoon Tea Awards. A live pianist occasionally graces this exquisite spot too, as if it needed any further enhancement of the salubrious ambience. Cakes & Bubbles is another gastronomic revelation: Albert Adrià (brother of the famous El Bulli head chef Ferran Adrià and holder of four Michelin stars in Barcelona) opened this, his first permanent venture outside Spain, after an initial 50-day residency. It is a dessert and champagne experience which opened last year in November. It shows why he is revered as one of the finest pastry chefs in the world. The aforementioned Ziggy’s Cocktail Bar offers a modern take on classic cocktails inspired by Bowie’s music. Head to the first floor and soak in the Starman’s legacy. Finally, no visit to Hotel Café Royal would be complete without a glorious meal at Laurent Grill and Sushi Bar. Expect the finest steak and fish from the parrilla grill alongside inventive sushi from Laurent Tourondel. The American chef weaves New York classics, such as truffle-popover Benedict and crispy salt-beef steamed buns, with a touch of East Asian elegance via pork kimchi fried rice and sashimi. The exquisite lobster roll and practically anything from the sushi bar is revelation – premium fare, intricately infused with the most refined flavours by experts from Japan, in all its ritualistic glory. Sam Heathcote, the head sommelier from Australia will make sure that those heavenly bites are paired with the finest tipples from across the world, too. Laurent shines just like every nook and corner at Hotel Café Royal, which is indeed still very much the heaving, breathing living room of London. Hotel Café Royal, 68 Regent Street , London, W1B 4DY UK +44 (0)207 406 3333, www.hotelcaferoyal.com