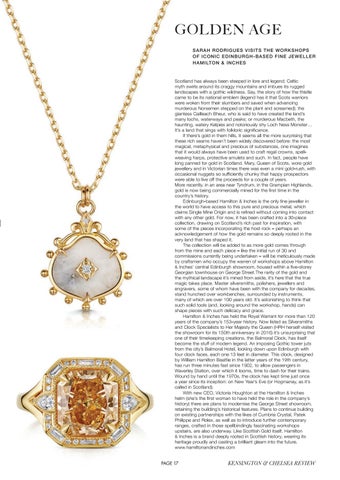 Scotland has always been steeped in lore and legend; Celtic myth swirls around its craggy mountains and imbues its rugged landscapes with a gothic wildness. Say, the story of how the thistle came to be its national emblem (legend has it that Scots warriors were woken from their slumbers and saved when advancing murderous Norsemen stepped on the plant and screamed); the giantess Cailleach Bheur, who is said to have created the land’s many lochs, waterways and peaks; or murderous Macbeth, the haunting, watery Kelpies and notoriously shy Loch Ness Monster… It’s a land that sings with folkloric significance. If there’s gold in them hills, it seems all the more surprising that these rich seams haven’t been widely discovered before: the most magical, metaphysical and precious of substances, one imagines that it would always have been used to craft regal crowns, spellweaving harps, protective amulets and such. In fact, people have long panned for gold in Scotland. Mary, Queen of Scots, wore gold jewellery and in Victorian times there was even a mini gold-rush, with occasional nuggets so sufficiently chunky that happy prospectors were able to live off the proceeds for a couple of years. More recently, in an area near Tyndrum, in the Grampian Highlands, gold is now being commercially mined for the first time in the country’s history.  Edinburgh-based Hamilton & Inches is the only fine jeweller in the world to have access to this pure and precious metal, which claims Single Mine Origin and is refined without coming into contact with any other gold. For now, it has been crafted into a 30-piece collection, drawing on Scotland’s rich past for inspiration, with some of the pieces incorporating the host rock – perhaps an acknowledgement of how the gold remains so deeply rooted in the very land that has shaped it. The collection will be added to as more gold comes through from the mine and each piece – like the initial run of 30 and commissions currently being undertaken – will be meticulously made by craftsmen who occupy the warren of workshops above Hamilton & Inches’ central Edinburgh showroom, housed within a five-storey Georgian townhouse on George Street.The rarity of the gold and the mythical landscape it’s mined from aside, it’s here that the true magic takes place. Master silversmiths, polishers, jewellers and engravers, some of whom have been with the company for decades, stand hunched over workbenches, surrounded by instruments, many of which are over 100 years old. It’s astonishing to think that such solid tools (and, looking around the workshop, hands) can shape pieces with such delicacy and grace.  Hamilton & Inches has held the Royal Warrant for more than 120 years of the company’s 153-year history. Now listed as Silversmiths and Clock Specialists to Her Majesty the Queen (HRH herself visited the showroom for its 150th anniversary in 2016) it’s unsurprising that one of their timekeeping creations, the Balmoral Clock, has itself become the stuff of modern legend. An imposing Gothic tower juts from the city’s Balmoral Hotel, looking down upon Edinburgh with four clock faces, each one 13 feet in diameter. This clock, designed by William Hamilton Beattie in the latter years of the 19th century, has run three minutes fast since 1902, to allow passengers in Waverley Station, over which it looms, time to dash for their trains. Wound by hand until the 1970s, the clock has kept time just once a year since its inception: on New Year’s Eve (or Hogmanay, as it’s called in Scotland).  With new CEO, Victoria Houghton at the Hamilton & Inches helm (she’s the first woman to have held the role in the company’s history) there are plans to modernise the George Street showroom, retaining the building’s historical features. Plans to continue building on existing partnerships with the likes of Cumbria Crystal, Patek Philippe and Rolex, as well as to introduce further contemporary ranges, crafted in those spellbindingly fascinating workshops upstairs, are also underway. Like Scottish Gold itself, Hamilton & Inches is a brand deeply rooted in Scottish history, wearing its heritage proudly and casting a brilliant gleam into the future. www.hamiltonandinches.com PAGE179 PAGE