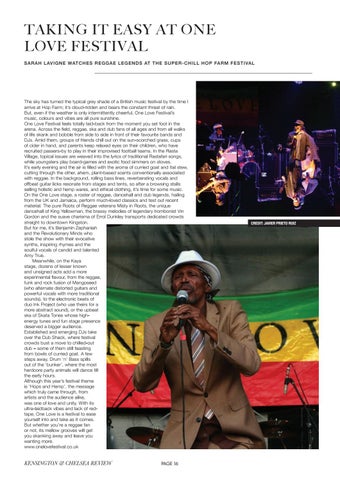 The sky has turned the typical grey shade of a British music festival by the time I arrive at Hop Farm; it’s cloud-ridden and bears the constant threat of rain. But, even if the weather is only intermittently cheerful, One Love Festival’s music, colours and vibes are all pure sunshine. One Love Festival feels totally laid-back from the moment you set foot in the arena. Across the field, reggae, ska and dub fans of all ages and from all walks of life skank and bobble from side to side in front of their favourite bands and DJs. Amid them, groups of friends chill out on the sun-scorched grass, cups of cider in hand, and parents keep relaxed eyes on their children, who have recruited passers-by to play in their improvised football teams. In the Rasta Village, topical issues are weaved into the lyrics of traditional Rastafari songs, while youngsters play board-games and exotic food simmers on stoves. It’s early evening and the air is filled with the aroma of curried goat and Ital stew, cutting through the other, ahem, plant-based scents conventionally associated with reggae. In the background, rolling bass lines, reverberating vocals and offbeat guitar licks resonate from stages and tents, so after a browsing stalls selling holistic and hemp wares, and ethical clothing, it’s time for some music. On the One Love stage, a roster of reggae, dancehall and dub legends, hailing from the UK and Jamaica, perform much-loved classics and test out recent material. The pure Roots of Reggae veterans Misty in Roots, the unique dancehall of King Yellowman, the brassy melodies of legendary trombonist Vin Gordon and the suave charisma of Errol Dunkley transports dedicated crowds straight to downtown Kingston. But for me, it’s Benjamin Zephaniah and the Revolutionary Minds who stole the show with their evocative synths, inspiring rhymes and the soulful vocals of candid and talented Amy True. Meanwhile, on the Kaya stage, dozens of lesser known and unsigned acts add a more experimental flavour, from the reggae, funk and rock fusion of Mangoseed (who alternate distorted guitars and powerful vocals with more traditional sounds), to the electronic beats of duo Ink Project (who use theirs for a more abstract sound), or the upbeat ska of Skata Tones whose highenergy tunes and fun stage presence deserved a bigger audience. Established and emerging DJs take over the Dub Shack, where festival crowds bust a move to chilled-out dub – some of them still feasting from bowls of curried goat. A few steps away, Drum ‘n’ Bass spills out of the ‘bunker’, where the most hardcore party animals will dance till the early hours. Although this year’s festival theme is ‘Hops and Hemp’, the message which truly came through, from artists and the audience alike, was one of love and unity. With its ultra-laidback vibes and lack of redtape, One Love is a festival to ease yourself into and take as it comes. But whether you’re a reggae fan or not, its mellow grooves will get you skanking away and leave you wanting more. www.onelovefestival.co.uk