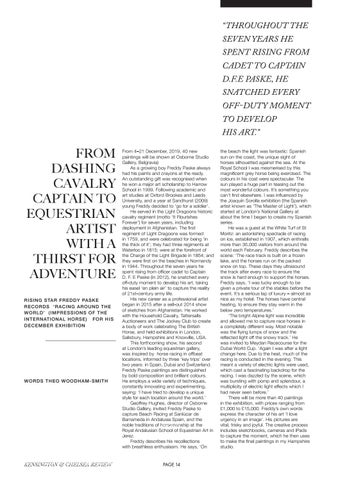 ‘‘THROUGHOUT THE SEVEN YEARS HE

SPENT RISING FROM CADET TO CAPTAIN D.F.E PASKE, HE

From 4–21 December, 2019, 40 new paintings will be shown at Osborne Studio Gallery, Belgravia) As a growing boy Freddy Paske always had his paints and crayons at the ready. An outstanding gift was recognised when he won a major art scholarship to Harrow School in 1999. Following academic and art studies at Oxford Brookes and Leeds University, and a year at Sandhurst (2009) young Freddy decided to ‘go for a soldier’. He served in the Light Dragoons historic cavalry regiment (motto ‘It Flourishes Forever’) for seven years, including deployment in Afghanistan. The first regiment of Light Dragoons was formed in 1759, and were celebrated for being ‘in the thick of it’; they had three regiments at Waterloo in 1815; were at the forefront of the Charge of the Light Brigade in 1854; and they were first on the beaches in Normandy in 1944. Throughout the seven years he spent rising from officer cadet to Captain D. F. E Paske (in 2012), he snatched every off-duty moment to develop his art, taking his easel ‘en plein air’ to capture the reality of 21st-century army life. His new career as a professional artist began in 2015 after a sell-out 2014 show of sketches from Afghanistan. He worked with the Household Cavalry, Tattersalls Auctioneers and The Jockey Club to create a body of work celebrating The British Horse, and held exhibitions in London, Salisbury, Hampshire and Knoxville, USA. This forthcoming show, his second at London’s leading equestrian gallery, was inspired by horse racing in offbeat locations, informed by three ‘key trips’ over two years: in Spain, Dubai and Switzerland. Freddy Paske paintings are distinguished by bold composition and brilliant colours. He employs a wide variety of techniques, constantly innovating and experimenting, saying: ‘I have tried to develop a unique style for each location around the world.’ Geoffrey Hughes, director of Osborne Studio Gallery, invited Freddy Paske to capture Beach Racing at Sanlúcar de Barrameda in Andalusia Spain, and the noble traditions of horsemanship at the PAGE 10 Royal Andalusian School of Equestrian Art in Jerez. Freddy describes his recollections with breathless enthusiasm. He says, ‘On

the beach the light was fantastic: Spanish sun on the coast, the unique sight of horses silhouetted against the sea. At the Royal School I was mesmerised by this magnificent grey horse being exercised. The colours in his coat were spectacular. The sun played a huge part in teasing out the most wonderful colours. It’s something you can’t find elsewhere. I was influenced by the Joaquín Sorolla exhibition (the Spanish artist known as ‘The Master of Light’), which started at London’s National Gallery at about the time I began to create my Spanish series. He was a guest at the White Turf of St Moritz: an astonishing spectacle of racing on ice, established in 1907, which enthralls more than 35,000 visitors from around the world each February. Freddy describes the scene: ‘The race track is built on a frozen lake, and the horses run on the packed snow on top. These days they ultrasound the track after every race to ensure the snow is hard enough to support the horses. Freddy says, ‘I was lucky enough to be given a private tour of the stables before the event. It’s a serious lap of luxury – almost as nice as my hotel. The horses have central heating, to ensure they stay warm in the below zero temperatures.’ ‘The bright Alpine light was incredible and allowed me to capture race horses in a completely different way. Most notable was the flying lumps of snow and the reflected light off the snowy track.’ He was invited to Meydan Racecourse for the Dubai World Cup. ‘Again I was after a light change here. Due to the heat, much of the racing is conducted in the evening. This meant a variety of electric lights were used, which cast a fascinating backdrop for the racing. I was dazzled by the scene, which was bursting with pomp and splendour, a multiplicity of electric light effects which I had never seen before.’ There will be more than 40 paintings in the exhibition, with prices ranging from £1,000 to £15,000. Freddy’s own words express the character of his art ‘I love urgency in an image’. His pictures are vital, frisky and joyful. The creative process includes sketchbooks, cameras and iPads to capture the moment, which he then uses to make the final paintings in my Hampshire studio.