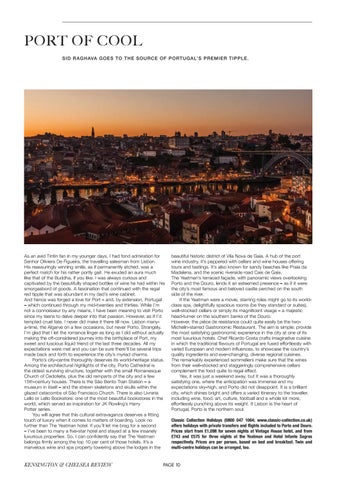 As an avid Tintin fan in my younger days, I had fond admiration for Senhor Oliviera De Figueira, the travelling salesman from Lisbon. His reassuringly winning smile, as if permanently etched, was a perfect match for his rather portly gait. He exuded an aura much like that of the Buddha, if you like. I was always curious and captivated by the beautifully shaped bottles of wine he had within his smorgasbord of goods. A fascination that continued with the regal red tipple that was abundant in my dad’s wine cabinet. And hence was forged a love for Port – and, by extension, Portugal – which continued through my mid-twenties and thirties. While I’m not a connoisseur by any means, I have been meaning to visit Porto since my teens to delve deeper into that passion. However, as if I’d tempted cruel fate, I never did make it there till now. Lisbon manya-time, the Algarve on a few occasions, but never Porto. Strangely, I’m glad that I let the romance linger as long as I did without actually making the oft-considered journey into the birthplace of Port, my sweet and luscious liquid friend of the last three decades. All my expectations were met and you can be sure there’ll be several trips made back and forth to experience the city’s myriad charms. Porto’s city-centre thoroughly deserves its world-heritage status. Among the architectural highlights of the city, Porto Cathedral is the oldest surviving structure, together with the small Romanesque Church of Cedofeita, plus the old ramparts of the city and a few 15th-century houses. There is the São Bento Train Station – a museum in itself – and the strewn skeletons and skulls within the glazed catacombs of São Francisco Church. There is also Livraria Lello or Lello Bookstore: one of the most beautiful bookstores in the world, which served as inspiration for JK Rowling’s Harry Potter series. You will agree that this cultural extravaganza deserves a fitting touch of luxury when it comes to matters of boarding. Look no further than The Yeatman hotel. If you’ll let me brag for a second – I’ve been to many a five-star hotel and stayed at a few insanely luxurious properties. So, I can confidently say that The Yeatman belongs firmly among the top 10 per cent of those hotels. It’s a marvelous wine and spa property towering above the lodges in the

beautiful historic district of Vila Nova de Gaia. A hub of the port wine industry, it’s peppered with cellars and wine houses offering tours and tastings. It’s also known for sandy beaches like Praia da Madalena, and the scenic riverside road Cais de Gaia. The Yeatman’s terraced façade, with panoramic views overlooking Porto and the Douro, lends it an esteemed presence – as if it were the city’s most famous and beloved castle perched on the south side of the river. If the Yeatman were a movie, starring roles might go to its worldclass spa, delightfully spacious rooms (be they standard or suites), well-stocked cellars or simply its magnificent visage – a majestic head-turner on the southern banks of the Douro. However, the piéce de resistance could quite easily be the twoMichelin-starred Gastronomic Restaurant. The aim is simple: provide the most satisfying gastronomic experience in the city at one of its most luxurious hotels. Chef Ricardo Costa crafts imaginative cuisine in which the traditional flavours of Portugal are fused effortlessly with varied European and modern influences, to showcase the country’s quality ingredients and ever-changing, diverse regional cuisines. The remarkably experienced sommeliers make sure that the wines from their well-stocked and staggeringly comprehensive cellars complement the food quite to regal effect. Yes, it was just a weekend away, but It was a thoroughly satisfying one, where the anticipation was immense and my expectations sky-high, and Porto did not disappoint. It is a brilliant city, which shines bright and offers a varied itinerary to the traveller, including wine, food, art, culture, football and a whole lot more, effortlessly punching above its weight. If Lisbon is the heart of Portugal, Porto is the northern soul. Classic Collection Holidays (0800 047 1064; www.classic-collection.co.uk) offers holidays with private transfers and flights included to Porto and Douro. Prices start from £1,098 for seven nights at Vintage House hotel, and from £743 and £575 for three nights at the Yeatman and Hotel Infante Sagres respectively. Prices are per person, based on bed and breakfast. Twin and multi-centre holidays can be arranged, too.