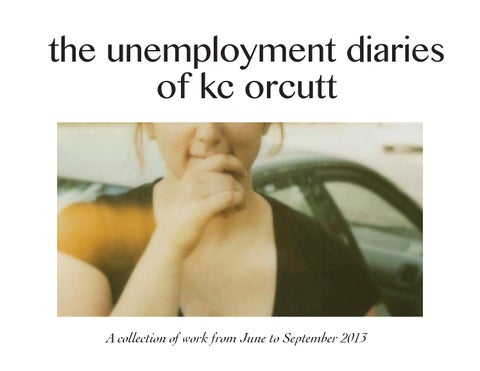 the unemployment diaries of kc orcutt

A collection of work from June to September 2013

Writerâ&#x20AC;&#x2122;s Statement In June, I was unexpectedly laid off from both of my paid writing positions. As an attempt to adapt while also remaining productive, I bought a blank notebook and declared it The Unemployment Diaries. Because no one wants to hear me talk about it.

here i sit blank-staring at the empty space of my new calendar {losing my job in one weeks time} lets face it: this is not looking so good.

feels like iâ&#x20AC;&#x2122;m waiting for the next chapter to begin instead of simply just beginning.

IN TRANSIT i’m becoming one of those people who cringes at skin-to-skin touches maybe it’s indifference, or nervousness of the unknown. my mind elsewhere and focusing on numbers the numbers don’t lie and they are telling me no (as they have been) how many days and times and figures until the cards dip into my favor (will they ever) i know what i want and what i need to do but, there’s always something. how to ignore the voices in my head and remember any move a move forward.

tunnel vision into uncertainty i’m getting better and better at not listening at sleeping in at staying up late at being discouraged but pings of stubbornness rattle my bones and this time, it’s a bit different it feels different, i see it differently i could make it work new levels of sacrifice to explore burning desire in my calves after a long days aimless walk talking to everyone about the same damn thing over and over again i need out i want out the signs, the times, the challenges ahead wearing me out like never before uninspired where i sit until i think of what’s ahead feeling boring gets old and i crave something new, for the sake of new even if its nostalgia disguised it just hasn’t happened, yet i feel so wise if not now, then when how can i tell if i never begin

Your past is just a story and once you realize this, it has no power o v e r y o u

sometimes the people donâ&#x20AC;&#x2122;t change, just the circumstances do.

there are {so why

i could not on

listening to my own voice has gotten me this far, so far.

my fake city backyard, with its fire escapes and deceiving depth. dying green grass still growing against the odds. like lighting citranola candles in the daytime, just because you can, not because you know why.

quiet. still. restless. no one will bother you, everyone is too busy to notice you, sitting there with your back against the wall but still you must notice and recognize - the potential lies in the days ahead.

i’m not good at this. any of this. never have been and don’t anticipate change better at saying the first, wrong thing and dealing with consequences later i’m going to be the one to throw the brick because it’s weight is heavy in my hand and i have to do something. history has shown that silence breeds chaos and that ships will sail or ships will sink guess it all depends on how you think i’m held captive in your mind on my own time uncertain and unamused, but already ignited by no fault but a modern assumption of fate’s this is how it’s going to be nothing according to plan but that’s nothing new consider that as you consider me, map in hand and eyes to the horizon. 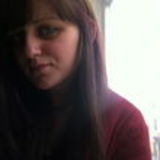 A collection of original writing and photography by KC Orcutt.

A collection of original writing and photography by KC Orcutt.