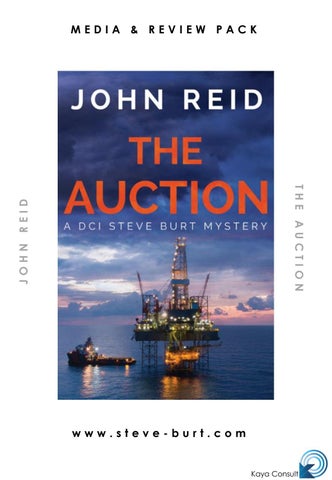 The first by publication date but second in sequence of the new DCI Steve Burt mystery series of crime fiction novels. The first book, The Forgotten Gun, is scheduled for publication in Autumn 2021

THE AUCTION – PLOT SUMMARY In his latest murder investigation, DCI Steve Burt is drawn into the sleazy underbelly of London gentlemen&#39;s clubs and all - while tracking down a serial killer who is murdering young women and dumping their bodies soon afterwards. Then the body of an American professor is found floating in the Thames, and the DCI and his team find themselves involved in another murder case which is by no means a straightforward killing. In his search for answers, the DCI and his nearest and dearest are threatened as he uncovers police corruption at the highest level. As the investigation unfolds, links are discovered between murder, an attempt to auction a stolen formula for green energy, and unauthorised CIA activity in London. This is DCI Steve Burt&#39;s most complicated and most baffling case to date.

Who can he trust to help him stay alive, let alone solve the case?

WHAT READERS ARE SAYING

It all started with the murder of a scientist who created a theory of green fuel which would replace petrol and diesel. It was billion dollars idea with all the workings required for the mass production of the fuel. The title “The Auction” states the auction had been held for the water-based fuel by the scientist who was murdered. It is a great crime novel that has many mystery murders and corruption in law enforcement.

There are various murder plots simultaneously given in the book which makes the storyline interesting and suspenseful. The investigation was moved from New York to the darkest areas in London. Not just the underground criminals in the darkest areas of London but also the police and other law enforcement authorities were corrupt and was a major investigation reveal by DCI Steve. This is the most complicated case for Steve with multiple murders and triple homicides which lead to the revelation of dark secrets, the truth about the underbelly of London, and the discovery of long-buried facts. characterization and sequence of events in the whole story are intelligently written and portrayed. It is an absolutely original book with the whole crime, homicides, suspense, and surprising endings. The book was extremely mysterious and enthralling. The writing was captivating and I was too intrigued by the original writing. I enjoyed the book a lot because I read this book within a span of 3 to 4 days and I was not able to stop thinking about the murder plots even when I was asleep. The novel is detailed to create a perfect image even if I have not visited the places mentioned in the book, I was able to imagine them perfectly well and it felt like a Deja Vu. The story ended with a very happy ending where DCI Steve was getting married and thinking about his life after marriage and what and when could be his next case. Will all these be the same for him after his marriage? I am excited to read the next book in this series. Nancy J, New York

I enjoy reading crime and suspense novels and found this book a brilliant read, I finished the book in one sitting and thoroughly enjoyed it, there are multiple plot lines running alongside each other and all keep you guessing until the end. I would definitely recommend this book and I am looking forward to future books in the series.

Well researched, thoughtfully written, a very good read, looking forward to the next. Charles D, Portugal Really enjoyed the book. Well written and gripping to the end. I love a good murder mystery - one to watch!!!

I bought this book as a recommendation from a friend. It’s a good read with a couple of interesting plots. A good detective story which moves at some pace. I thoroughly enjoyed the book and look forward to the next instalment. Steve A, Cornwall

At last, a brilliant detective without hang-ups and Steve Burt needs to brilliant to sort this Author&#39;s intriguing plot . Be prepared to be hooked on this book which has action on every page. Read the book and wait to compare it with the TV series that this character deserves. James, Weston-super-Mare

With a web of corruption and greed that reaches the very top, with every probing question the risks and the danger intensify – who can he trust as he scrambles to solve the case and save his life.

John Reid is a new crime fiction author, bringing a fresh style to the genre and inventive plots that keep the reader in suspense until the very end of each book. Starting his working life as a student lab tech in Dundee with the NHS was short-lived as the mundane daily routine drove John to join the army on a 3 year Short Service Commission and get the adventure he craved. With tours completed in Northern Ireland and the Middle East he certainly got that. A distinguished and successful business career followed that culminated in managing the UK portfolio of a Geneva based investment house. Now living in Portugal with wife Liz, when not typing with a single finger John can normally be found on the golf course, chasing Andre Riue across Europe or watching motorsport, most probably Formula 1. .

Make sure no one is left out of life John is making a donation to Sense for every copy sold of every book.