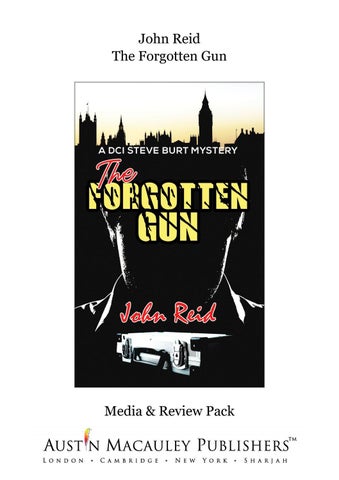 The Forgotten Gun by John Reid is scheduled for publication on the 31st August 2021. About the Book A Metropolitan Police detective about to be dismissed is given a second chance by his old boss, who is now a police commander. He’s given a new unit to run and two misfit detectives to assist him. All three know their status is temporary. Their first case together is an impossible double murder. Each murder is identical. Both victims are expertly shot in the head from long range, but the post-mortems reveal no bullets were used in the shootings. The CSI teams calculate that in both cases there was no place for the marksman to have fired from, unless suspended over busy roads. Although it’s a case apparently impossible to solve, DCI Steve Burt reluctantly agrees to investigate with his new team. Their enquiries lead them into the murky world of greed, corruption, fraud and money laundering, but they are no nearer solving the murders. The team is stumped until the DCI meets a retired army major and a WW2 veteran who unwittingly hold the keys to solving these impossible murders.

Bookaddict Goodreads Reviewer 5 out of 5 “Within the first few pages of this story, I was hooked” “Told through an impartial, even stoic, voice it managed to intrigue me from the start” “Compelling, engaging, and riveting, this phenomenal, well-paced story will carry you effortlessly through to its shocking, satisfying conclusion.” “Fans of mystery, thrillers and crime fiction will quickly devour this fantastic, spellbinding read.”

Emma Hardy Goodreads Reviewer 5 out of 5 “There are so many things I enjoyed about this read.” “This is an intricate plot, some clues I picked up on, but nowhere close to working out the ending. Wonderfully unexpected”

Davvydde Goodreads Reviewer 5 out of 5 This is my first time reading a crime/detective book and I am so glad to have read this. It was such a page turner” “The end was so unexpected and shocking, I was jumping from excitement!” “I adored the writing and the characters were awesome. I really loved this book and I recommend it to anyone”

Available via Austin Macauley, Amazon, Waterstones, Barnes and Noble and all good booksellers.

About the Author The author was born in Scotland and after serving in the army embarked on a career in industry and commerce. He has worked in several different sectors of business mostly in senior roles and lat-terly as CEO of a large international data capture company. He retired for the first time in 1995 but continued to work as a consultant helping new businesses become established. In 2018, he finally retired from business life to become a full-time author. John lives in the UK and Portugal with his wife and they have two grown-up sons. John has used the DCI Steve Burt series to get involved with Sense, a great charity that supports anyone living with complex disabilities. Sense helps people communicate and experience the world. They, like John, believe that no one, no matter how complex their disabilities, should be isolated, left out, or unable to fulfill their potential.