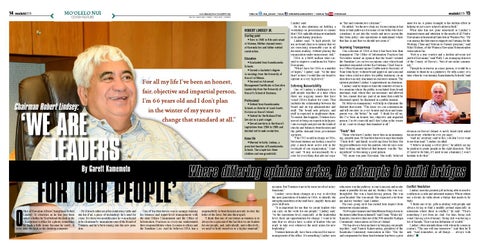 For all my life I’ve been an honest, fair, objective and impartial person. I’m 66 years old and I don’t plan in the winter of my years to change that standard at all.”

Education • Graduated from Kamehameha Schools. • Earned a bachelor’s degree in sociology from the University of Hawai‘i at Mänoa. • Secured an Advanced Management Certificate in Executive Leadership from the University of Hawai‘i’s School of Business. Professional • Retired from Kamehameha Schools as Director of Land Assets Division on Hawai‘i Island. • Worked for the National Park Service as a park ranger. • Served one term in the Hawai‘i Legislature from 1984 to 1986 and decided not to seek re-election. Home life • Married to Kathy Lindsey, a preschool teacher at Kamehameha Schools. The couple has three children and one grandchild.

Lindsey said. He is also planning on holding a workshop on procurement to ensure that OHA upholds stringent standards in its purchasing practices. Lindsey said, “A high priority for me as board chair is to ensure that we are exercising reasonable care in all decision making, without placing the organization under unnecessary risk.” OHA is a $600 million trust created to improve conditions for Native Hawaiians. “What I have for OHA is a number of hopes,” Lindsey said. “In the time that I’m here I would like our board to operate at a very high level.”

One of Lindsey’s challenges is to pull people together at a time when there are nagging issues that have vexed OHA’s leaders for years. That includes the relationship between the board and its top administrator and staff. The board sets policies, and staff is expected to implement them. To ensure this happens, Trustees have moved to bring on experts to help provide oversight and provide the kinds of checks and balances beneficiaries and the public demand from government agencies. “The CEO is still in charge at OHA, but most trustees are feeling a need to play a much more active role in the oversight of our organization,” Lindsey said. “It may not necessarily be a cure for everything that ails our orga-

as “fair and constructive criticism.” He added, “As the new chair, my focus coming in has been to find pathways for some of our folks who have a tendency to get into the weeds and move across the line from policy into operations to understand where that line is and that we should not cross it.”

One criticism of OHA is that it has been less than transparent. The Office of Information Practices last November issued an opinion that the board violated the Sunshine Law on two occasions: once when board members rescinded a letter Ka Pouhana, Chief Executive Officer Kamana‘opono Crabbe sent to Secretary of State John Kerry without board approval, and a second time when it did not allow for public testimony on an item that was only discussed in executive session. The opinion predates Lindsey’s appointment as chairman. Lindsey said he hopes to limit the number of executive sessions where the public is excluded from board meetings. And, where they are necessary and allowed by law, ensure that any part of an issue that could be discussed openly be discussed in a public session. He believes transparency will help to eliminate the distrust that exists. “The more we can communicate and tell our story in a very honest and clear and transparent way, the better,” he said. “I think for all my life I’ve been an honest, fair, objective and impartial person. I’m 66 years old and I don’t plan in the winter of my years to change that standard at all.”

asset for us. A prime example is his tireless effort in helping us get a new school cafeteria built.” What also has not gone unnoticed is Lindsey’s responsiveness and attention to the needs of 42 Native Hawaiians on homestead farm lots in Waimea Nui. “He was among the first ones to support our Farming for the Working Class and Veteran to Farmer program,” said Mike Hodson, of the Waimea Hawaiian Homesteaders Association Inc. “Bob is a true warrior and a tireless advocate not just for Hawaiians,” said Wally Lau, managing director of the County of Hawai‘i, “but of our entire community.” Though he is known as a nice person, it would be a mistake to think he is a pushover. He tells a story of a time when he was running Kamehameha Schools’ land

division on Hawai‘i Island. A newly hired clerk asked his secretary whether he ever got angry. “And my secretary said to her, you don’t ever want to see him mad,” Lindsey recalled. “I believe in using a velvet glove,” he added, saying he prefers to guide people in the right direction. “But if I need to be firm, if I need to use a hammer, I won’t hesitate to do that.”

education was the pathway to one’s success and so she made it possible for me and my brother. She was very thoughtful. She was a hard-driving person. She was good hearted. She was smart. She expected a lot from me and my brother,” said Lindsey. His easy-going style has earned him respect from numerous organizations. “Bob’s quiet manner and humbleness brings focus to the issues rather than on himself,” said Diane “Maka‘ala” Kanealii, executive director of the 500-member Kailapa Community Association on Hawai‘i Island. “He has always been inclusive in bringing our people together,” said Patrick Kahawaiolaa, president of the Keaukaha Community Association in Hilo. “His ‘ike and compassion for those less fortunate has been a great

Those who know Lindsey know him as an unassuming, amiable man. He has been known to sign his emails “Uncle Bob,” and family is a driving force for him. His biggest influences were his parents, who he says were hard working and believed that honesty was the “key ingredient” to becoming a good person. “My mom was pure Hawaiian. She really believed

ffice of Hawaiian Affairs Chairperson Robert Lindsey Jr. chuckles as he has just been asked whether he’ll sit behind the desk in the Chairperson’s office for a photo, something he finds a little ironic because he rarely, if ever, uses the desk or the desktop computer.

He’d much rather sit at his conference table and use his iPad, a piece of technology he’s used for years. It’s been two months since he was selected to be chairman by unanimous vote of the Board of Trustees and he’s been easing into his new position.

One of his first moves was to arrange training for trustees and upper-level management with the state Ethics Commission and the Office of Information Practices so everyone understands their responsibilities when it comes to ethics and the Sunshine Law. And he believes OHA has a

responsibility to beneficiaries not only to obey the letter of the laws, but also their spirit. “I think that one of our duties as trustees is to always be cognizant of the fact that we are leaders for our people, and, individually and collectively, we need to hold ourselves to a higher standard,”

nization. But Trustees want to be more involved in key functions.” Lindsey views those changes as a way to develop the next generation of leaders in OHA: to identify the strengths members of the staff have, amplify them and grow skill sets. “It is important for me that we create leaders who can carry on the work for our people,” Lindsey said. “At the operations level, especially at the leadership level, there are opportunities for change. I want to be sure that we always have a cadre of leaders who are ready to take over whenever the need arises for new leadership.” Trustees historically have been criticized for micromanagement of the office. It’s something Lindsey sees

Lindsey sees his greatest gift as being able to resolve conflicts in a calm and informed manner. Where others see a divide, he talks about a bridge that needs to be built. “I think one of my gifts is dealing with people and always trying to find a middle ground especially in situations where there is conflict,” he said. “That’s something I got from my dad. For him, being rich wasn’t having a lot of money. Being rich was having a lot of friends. That was his definition of wealth.” Lindsey often reminds those with whom he comes in contact, “The sun will rise tomorrow.” And then he’ll add, “And remember, in all things … always with aloha.” ¢