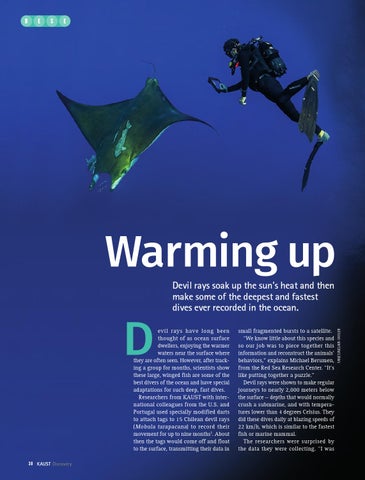 Warming up evil rays have long been thought of as ocean surface dwellers, enjoying the warmer waters near the surface where they are often seen. However, after tracking a group for months, scientists show these large, winged fish are some of the best divers of the ocean and have special adaptations for such deep, fast dives. Researchers from KAUST with international colleagues from the U.S. and Portugal used specially modified darts to attach tags to 15 Chilean devil rays ( Mobula tarapacana) to record their movement for up to nine months1. About then the tags would come off and float to the surface, transmitting their data in

small fragmented bursts to a satellite. “We know little about this species and so our job was to piece together this information and reconstruct the animals’ behaviors,” explains Michael Berumen, from the Red Sea Research Center. “It’s like putting together a puzzle.” Devil rays were shown to make regular journeys to nearly 2,000 meters below the surface — depths that would normally crush a submarine, and with temperatures lower than 4 degrees Celsius. They did these dives daily at blazing speeds of 22 km/h, which is similar to the fastest fish or marine mammal. The researchers were surprised by the data they were collecting. “I was

Devil rays soak up the sun’s heat and then make some of the deepest and fastest dives ever recorded in the ocean. 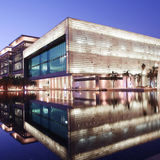 From curiosity to innovation

From curiosity to innovation