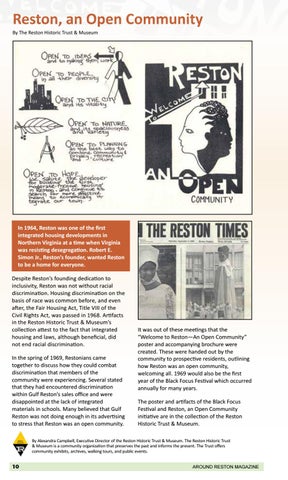 Reston, an Open Community By The Reston Historic Trust & Museum

In 1964, Reston was one of the first integrated housing developments in Northern Virginia at a time when Virginia was resisting desegregation. Robert E. Simon Jr., Reston’s founder, wanted Reston to be a home for everyone. Despite Reston’s founding dedication to inclusivity, Reston was not without racial discrimination. Housing discrimination on the basis of race was common before, and even after, the Fair Housing Act, Title VIII of the Civil Rights Act, was passed in 1968. Artifacts in the Reston Historic Trust & Museum’s collection attest to the fact that integrated housing and laws, although beneficial, did not end racial discrimination. In the spring of 1969, Restonians came together to discuss how they could combat discrimination that members of the community were experiencing. Several stated that they had encountered discrimination within Gulf Reston’s sales office and were disappointed at the lack of integrated materials in schools. Many believed that Gulf Reston was not doing enough in its advertising to stress that Reston was an open community.

It was out of these meetings that the “Welcome to Reston—An Open Community” poster and accompanying brochure were created. These were handed out by the community to prospective residents, outlining how Reston was an open community, welcoming all. 1969 would also be the first year of the Black Focus Festival which occurred annually for many years. The poster and artifacts of the Black Focus Festival and Reston, an Open Community initiative are in the collection of the Reston Historic Trust & Museum.