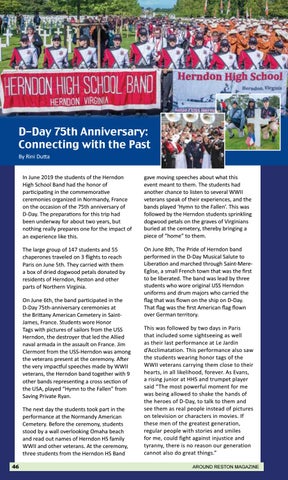 D-Day 75th Anniversary: Connecting with the Past By Rini Dutta In June 2019 the students of the Herndon High School Band had the honor of participating in the commemorative ceremonies organized in Normandy, France on the occasion of the 75th anniversary of D-Day. The preparations for this trip had been underway for about two years, but nothing really prepares one for the impact of an experience like this.

gave moving speeches about what this event meant to them. The students had another chance to listen to several WWII veterans speak of their experiences, and the bands played ‘Hymn to the Fallen’. This was followed by the Herndon students sprinkling dogwood petals on the graves of Virginians buried at the cemetery, thereby bringing a piece of “home” to them.

The large group of 147 students and 55 chaperones traveled on 3 flights to reach Paris on June 5th. They carried with them a box of dried dogwood petals donated by residents of Herndon, Reston and other parts of Northern Virginia.

On June 8th, The Pride of Herndon band performed in the D-Day Musical Salute to Liberation and marched through Saint-MereEglise, a small French town that was the first to be liberated. The band was lead by three students who wore original USS Herndon uniforms and drum majors who carried the flag that was flown on the ship on D-Day. That flag was the first American flag flown over German territory.

On June 6th, the band participated in the D-Day 75th-anniversary ceremonies at the Brittany American Cemetery in SaintJames, France. Students wore Honor Tags with pictures of sailors from the USS Herndon, the destroyer that led the Allied naval armada in the assault on France. Jim Clermont from the USS-Herndon was among the veterans present at the ceremony. After the very impactful speeches made by WWII veterans, the Herndon band together with 9 other bands representing a cross section of the USA, played “Hymn to the Fallen” from Saving Private Ryan. The next day the students took part in the performance at the Normandy American Cemetery. Before the ceremony, students stood by a wall overlooking Omaha beach and read out names of Herndon HS family WWII and other veterans. At the ceremony, three students from the Herndon HS Band 46

This was followed by two days in Paris that included some sightseeing as well as their last performance at Le Jardin d’Acclimatation. This performance also saw the students wearing honor tags of the WWII veterans carrying them close to their hearts, in all likelihood, forever. As Evans, a rising junior at HHS and trumpet player said “The most powerful moment for me was being allowed to shake the hands of the heroes of D-Day, to talk to them and see them as real people instead of pictures on television or characters in movies. If these men of the greatest generation, regular people with stories and smiles for me, could fight against injustice and tyranny, there is no reason our generation cannot also do great things.” AROUND RESTON MAGAZINE