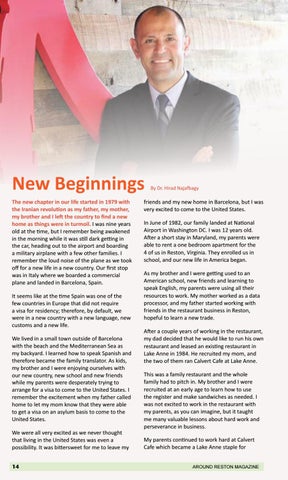 New Beginnings The new chapter in our life started in 1979 with the Iranian revolution as my father, my mother, my brother and I left the country to find a new home as things were in turmoil. I was nine years old at the time, but I remember being awakened in the morning while it was still dark getting in the car, heading out to the airport and boarding a military airplane with a few other families. I remember the loud noise of the plane as we took off for a new life in a new country. Our first stop was in Italy where we boarded a commercial plane and landed in Barcelona, Spain. It seems like at the time Spain was one of the few countries in Europe that did not require a visa for residency; therefore, by default, we were in a new country with a new language, new customs and a new life. We lived in a small town outside of Barcelona with the beach and the Mediterranean Sea as my backyard. I learned how to speak Spanish and therefore became the family translator. As kids, my brother and I were enjoying ourselves with our new country, new school and new friends while my parents were desperately trying to arrange for a visa to come to the United States. I remember the excitement when my father called home to let my mom know that they were able to get a visa on an asylum basis to come to the United States. We were all very excited as we never thought that living in the United States was even a possibility. It was bittersweet for me to leave my 14

friends and my new home in Barcelona, but I was very excited to come to the United States. In June of 1982, our family landed at National Airport in Washington DC. I was 12 years old. After a short stay in Maryland, my parents were able to rent a one bedroom apartment for the 4 of us in Reston, Virginia. They enrolled us in school, and our new life in America began. As my brother and I were getting used to an American school, new friends and learning to speak English, my parents were using all their resources to work. My mother worked as a data processor, and my father started working with friends in the restaurant business in Reston, hopeful to learn a new trade. After a couple years of working in the restaurant, my dad decided that he would like to run his own restaurant and leased an existing restaurant in Lake Anne in 1984. He recruited my mom, and the two of them ran Calvert Cafe at Lake Anne. This was a family restaurant and the whole family had to pitch in. My brother and I were recruited at an early age to learn how to use the register and make sandwiches as needed. I was not excited to work in the restaurant with my parents, as you can imagine, but it taught me many valuable lessons about hard work and perseverance in business. My parents continued to work hard at Calvert Cafe which became a Lake Anne staple for AROUND RESTON MAGAZINE