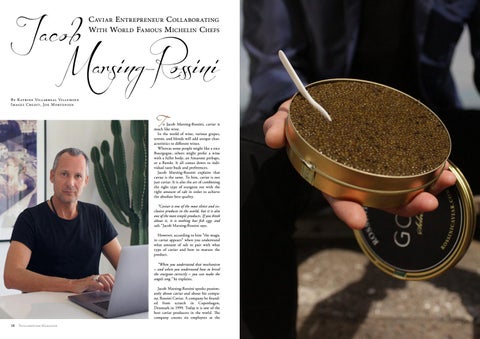 o Jacob Marsing-Rossini, caviar is much like wine. In the world of wine, various grapes, terroir, and blends will add unique characteristics to different wines. Whereas some people might like a nice Bourgogne, others might prefer a wine with a fuller body; an Amarone perhaps, or a Barolo. It all comes down to individual taste buds and preferences. Jacob Marsing-Rossini explains that caviar is the same. To him, caviar is not just caviar. It is also the art of combining the right type of sturgeon roe with the right amount of salt in order to achieve the absolute best quality. ”Caviar is one of the most elitist and exclusive products in the world, but it is also one of the most simple products. If you think about it, it is nothing but fish eggs and salt,” Jacob Marsing-Rossini says. However, according to him ”the magic in caviar appears” when you understand what amount of salt to pair with what type of caviar and how to mature the product. ”When you understand that mechanism – and when you understand how to breed the sturgeon correctly – you can make the angels sing,” he explains. Jacob Marsing-Rossini speaks passionately about caviar and about his company, Rossini Caviar. A company he founded from scratch in Copenhagen, Denmark in 1999. Today it is one of the best caviar producers in the world. The company counts six employees at the 18  Totalprestige Magazine

create quality caviar based on the chefs&#39; individual thoughts and culinary styles”. Since 1999 Rossini Caviar has launched at high-end restaurants in places from Copenhagen to Palma de Mallorca to Lombardy to Paris, and soon Rossini Caviar will continue its many years of collaboration with the Michelinstarred Frantzén restaurant in Stockholm when the new Frantzén opens in August.

Lamelae of avocado with almond oil &amp; Rossini Baerii Caviar By Michelin chef BO BECH main office in Copenhagen, three in Paris, and 15 in Latvia, and the products are distributed to most of Europe. However, Jacob Marsing-Rossini did not exactly take the traditional route when founding his business. He has a degree in clothing retail, but after traveling in the Caribbean, he became ill with decompression sickness. He soon found that his insurance wasn&#39;t valid, and after spending a long time in a pressure tank at an American military base in Barbados, he came home to a huge debt. Because he needed to pay off his debt, he started DJ&#39;ing during nights and weekends at some of the most hyped restaurants in Copenhagen at the time. Here he realized that some of the world&#39;s best trout roe is produced in Denmark. But instead of selling the trout roe on the Danish market, the distributors would export most of it to Japan. So one summer Jacob Marsing-Rossini made it his mission to drive around the country in order to find some of the best quality trout roe to sell. His idea was to preserve it entirely with the help of salt and no other additives. He ended up with five ton of it, but with no interested customers. However, as faith would have it, Jacob Marsing-Rossini soon met a Frenchman who had been trained at some of the best caviar houses in Paris. The two became partners – a partnership that is still going 20  Totalprestige Magazine

strong today – and Rossini Caviar was founded. There is one major reason why Rossini Caviar has become a number one player on the caviar market though, Jacob Marsing-Rossini explains; the company has managed to collaborate with some of the best chefs from around the world.

”We are not interested in the geography or the history behind caviar. Whereas geography used to play a big role in the sale of caviar – you would talk about Russian caviar or Iranian caviar – geography is only interesting to us if it has a direct connection to the quality of the end product,” Jacob Marsing-Rossini says. “Instead we aim to

“Our new caviar is called Gold Selection and is specifically developed for the new Frantzén in Stockholm. Many of the Michelin-chefs around the world prefer this caviar because the roes are big, creating a visually beautiful caviar with a membrane which makes the roe hard enough for them to add it to dishes with warm ingredients”, Jacob Marsing-Rossini says. The collaboration between Rossini Caviar and some of the world&#39;s most renowned chefs took off when Rossini Caviar decided to fly four of the very best Danish Michelin-chefs – Jakob De Neergaard, Paul Cummingham, Rasmus Grønbech, and Bo Bech – out to one of the sturgeon farms. This way Jacob Marsing-Rossini was hoping to make them understand the many conditions behind making quality caviar. The Rossini Caviar team supplied the four Michelin chefs with wet suits, had them catch the sturgeon directly from the waters, let them extract the roe from the sturgeon, rinse it, salt it, and package it. The idea was to demystify a world that has previously been hermetically sealed and reserved to the elite, Jacob MarsingRossini explains. ”The chefs have been the essence of our interpretation of modern caviar. By flying them out to the farms, they gained an understanding of how to make caviar, and what parameters are important in order to achieve the different nuances in taste. They then brought the caviar into their worldfamous kitchens and went on to interpret it their own way with their own signature dishes.”

Today Rossini Caviar produces six different types of caviar – White Sturgeon, two types of Baerii, Oscietra, Beluga, and Gold Selection – all harvested at farms in Italy, France, Poland, and China. Not because the geography is impor-

tant, Jacob Marsing-Rossini points out yet again, but because he believes these are the farms that produce the best quality caviar. “If you are new to caviar, we suggest that you start with the White Sturgeon. It&#39;s less salty, but very mild and creamy,

the perfect introduction. Again, it&#39;s like drinking wine. You don&#39;t want to pour yourself the heaviest blend if you have never had wine before,” Jacob Marsing-Rossini explains. “The Baerri is the best known caviar. We also produce a Baerri Prestige that has been matured longer which makes it saltier and easier for the Totalprestige Magazine  21

chefs to pair with some of their heavier ingredients.” His favorite caviar is the Oscietra, he says, because the roe always varies in size, color, and taste. While Rossini Caviar distributes to most of the European market, the company has decided to stay out of the caviar markets in America and Asia for now. On occasion Jacob Marsing-Rossini will get invitations from the U.S. though. Even though the company is not exporting any of its goods across the Atlantic, A-list celebrities and entrepreneurs still book Jacob MarsingRossini to run big private tasting events in locations such as Los Angeles and

New York City. He also just received a booking for a private tasting event in Dallas, Texas. When it comes to Jacob Marsing-Rossini himself, he eats caviar three times a week on average, he says; to ensure the quality that is. “The sex of a sturgeon is first to be determined after three years, and only the female sturgeons are useful. The males are considered waste. For most caviar, the roe is only fully matured at twelve weeks, and the quality at Rossini Caviar is therefore carefully monitored several times a week”, Jacob Marsing-Rossini explains. ”So on average I will probably taste approximately 50 qualities of caviar each week. It gives you a different view of caviar

of course, a more professional view. I would expect it to be like a sommelier working with wine”. The next step for Rossini Caviar will also be to focus on the individual taste in caviar. While the company is expanding its retail to various new European airports in the coming months, Rossini Caviar will also put more focus on how customers are guided towards purchasing the right type of caviar. ”When you buy wine, you don&#39;t just pick up the first and best bottle you see,” Jacob Marsing-Rossini explains. ”You have an opinion about what type of grape or blend you prefer. Caviar has the same diversity”.

”In the future I hope to spend even more time collaborating with some of the very best chefs from around the world. It’s a huge privilege to work with such competent people. And it’s a big compliment if they choose to work with my products. It only means that my view of quality is right”.

Jacob Marsing-Rossini realized this during a tasting event for chefs and kitchen staff in Dubai, he says. Out of the 172 people attending the event, 94 were women tasting their way through the different types of caviar. ”We lined up the caviar in a blind tasting, and even though the women were geographically from all over the world, 75% of them would choose our White Sturgeon caviar as their favorite.” According to him, men and women experience taste differently, and Rossini Caviar will explore this even further in their retail sale in various airports around Europe in the future. ”Our staff will ask the customers what their knowledge of caviar is, and if they need guidance. If the costumer is a woman, then 75 percent of the time she will be more satisfied with the product, if you suggest the White Sturgeon to her” While Rossini Caviar is looking to expand its retail sale in airports around the world, and even though the company is also hoping to make it into the cruise ship market soon, staying true to his roots is the most important thing to Jacob Marsing-Rossini. www.rossinicaviar.com Rossini Caviar Magstræde 6, 2.sal DK – 1204 Copenhagen K – Denmark Phone (+45) 33 13 53 33 mail@RossiniCaviar.com 22  Totalprestige Magazine 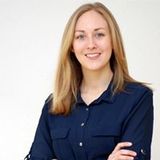