The Creative Hustle: How artists make it pay. Interview 6 - The Visual Artist 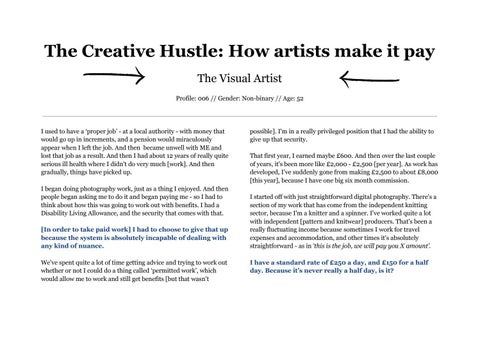 I used to have a ‘proper job’ - at a local authority - with money that would go up in increments, and a pension would miraculously appear when I left the job. And then became unwell with ME and lost that job as a result. And then I had about 12 years of really quite serious ill health where I didn&#39;t do very much [work]. And then gradually, things have picked up. I began doing photography work, just as a thing I enjoyed. And then people began asking me to do it and began paying me - so I had to think about how this was going to work out with benefits. I had a Disability Living Allowance, and the security that comes with that. [In order to take paid work] I had to choose to give that up because the system is absolutely incapable of dealing with any kind of nuance. We&#39;ve spent quite a lot of time getting advice and trying to work out whether or not I could do a thing called ‘permitted work’, which would allow me to work and still get benefits [but that wasn’t

possible]. I&#39;m in a really privileged position that I had the ability to give up that security. That first year, I earned maybe £600. And then over the last couple of years, it&#39;s been more like £2,000 - £2,500 [per year]. As work has developed, I’ve suddenly gone from making £2,500 to about £8,000 [this year], because I have one big six month commission. I started off with just straightforward digital photography. There&#39;s a section of my work that has come from the independent knitting sector, because I&#39;m a knitter and a spinner. I&#39;ve worked quite a lot with independent [pattern and knitwear] producers. That&#39;s been a really fluctuating income because sometimes I work for travel expenses and accommodation, and other times it&#39;s absolutely straightforward - as in ‘this is the job, we will pay you X amount’. I have a standard rate of £250 a day, and £150 for a half day. Because it’s never really a half day, is it?

But I’ll say to people that if we&#39;re doing a block of days, it doesn&#39;t always have to be the exact rate per day. Because I have ME I won&#39;t work 9am to 5pm - I tend to work shorter hours across more days. In the independent knitwear and dyeing and spinning world there’s quite a lot of people who work part time or freelance because of mental health issues. And other health issues too. So there&#39;s a really good awareness of people who don&#39;t work standard hours. That standard day rate has only developed in the last year or so. Before then I was doing a strange mixture of ‘how well do I know this person?’, or ‘can we do a trade?’, or I’ll work for a friend and know that there will be no fee but we&#39;ll collaborate on something later. I did a lovely job a few years ago documenting somebody else&#39;s work in Shetland. And ‘all’ I got paid was a week in Shetland. So there were some things where I almost got paid in an experience - and that was a joy. This year I’m involved in a six month project with [Scottish arts organisation]. I’m working with a collaborator, and the funding for [this project] must have been arranged before they decided to open it up to collaborative duos. So we applied as a duo, but we only get paid the same fee as a single artist. And it&#39;s not a job share - we do the full job together. It should be two days a week with one artist. And we work one day a week with the two of us. But it’s the old story - we will never only do one day a week because not everybody&#39;s available on that one day. We&#39;ve fed this back to them as a person with a disability, there&#39;s a very good reason that I work as a collaborative duo. We knew [when we applied] that there was every likelihood that we would only get the one fee [between us]. But it&#39;s such a good job. And again, that goes back to financial privilege.

I don&#39;t like not having an independent income. So in a sense, the more I earn, the better that feels. I&#39;ve had to live with the knowledge that I&#39;ve pretty much been supported for a large amount of time by my partner. And those decisions were made jointly. And now work is starting to kick off, and take on a life of its own, and opportunities are coming. But I&#39;m very conscious that that&#39;s only because I had the ability to take a risk [to give up Disability Living Allowance], and that isn&#39;t possible for everybody. I find that very annoying; it makes me very angry. And also, I also don&#39;t like being valued for what somebody else thinks I&#39;m worth. At the moment that&#39;s the only way we value anything. It&#39;s a real positive / negative thing, because it&#39;s great that people are valuing what I do, but there&#39;s almost a slightly grudging thing, which asks ‘what about all this stuff I tried to do all the other times, was that not worth anything?’. We’re in an industry that relies on word of mouth for so much. That&#39;s great, if you&#39;re the person [benefiting from that]. I didn&#39;t go to art college; to build the networks that I have I’ve actively elbowed my way in. There&#39;s a definite need to insert yourself in the correct places. I’m quite a middle class person who fits anywhere. And my old job was working with people, so I know how to do that. But I&#39;m conscious that if this had been me 25 years ago, I wouldn&#39;t have [been able to] do any of this. Whenever it&#39;s possible, in future I’d like to take somebody out with me [on jobs] - things like job shadowing, work experience - so that other people who are trying to

get in [to the industry], can have the chance to be seen. Once you&#39;re on the list, it&#39;s great. But getting on it in the first place is hard. Sometimes [people don’t make] a connection between what I do and why that&#39;s worth money. Particularly because I work with textiles and knitting. [People think] ‘My granny was a knitter. Why would you get paid for that stuff?’. So there&#39;s a bit of a disconnect between the skills I have and what people think that&#39;s worth. [As a photographer], I’ll be at events [in my own time] and people say, ‘could you just take a couple of pictures while you&#39;re here?’ I&#39;ve taught myself to find ways of letting people down gently. I&#39;ve developed a system of saying I do so much pro bono work every year, and unfortunately, that&#39;s now already allocated. I think the main thing that controls how much work I do is my physical capabilities. So that means I do turn things down. I don&#39;t do weddings, because they’re really intense full days. It&#39;s a really, really tough job - a really skilled job. And I don&#39;t think I could do that. The other thing that will prevent me from getting work is the fact that I live in a small village. If people want me they have to pay enough [to cover] my travel expenses in my fee. If somebody has a

tight budget, I think that makes a difference [to whether they can pay that extra]. And if it&#39;s a last minute gig, they&#39;re not going to pick me, they&#39;re going to pick somebody in their local area. You might not always think that the creative industries would be obsessed with productivity, but we still are. It&#39;s [all about] ‘how much can you do?’ And many of the residencies and things that I look at would be great, but from a disability perspective I can&#39;t do a month solidly, or I can&#39;t do a long weekend [where] every day starts at nine and finishes at seven. In an ideal world we&#39;d all be well enough to work like [that], because there&#39;s a great adrenaline in deadlines, and working really hard, and pushing through. But I did that recently because it was a wonderful opportunity, and then I was ill for three weeks - I had to go to bed. I wouldn&#39;t have swapped [the experience], but it&#39;s not sustainable. For a residency I&#39;m doing next week - they specifically said ‘what are your needs? We’ll work around what you can do, instead of you trying to fit into what everybody else assumes is okay’. As a household, we are mortgage free, which is amazing. I live with a partner who took early retirement, so we have a steady, livable income - not an extravagant income - through his pension. We have a small flat that we were able to pay off when my partner took early retirement. Financially, we&#39;re in no trouble if I don&#39;t work.

The Creative Hustle: How artists make it pay. Interview 6 - The Visual Artist