The Creative Hustle: How artists make it pay. Interview 2 - The Writer Director 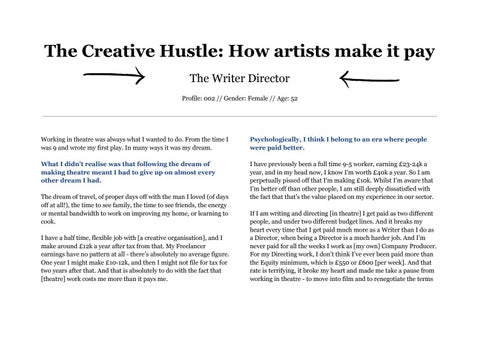 Working in theatre was always what I wanted to do. From the time I was 9 and wrote my first play. In many ways it was my dream.

Psychologically, I think I belong to an era where people were paid better.

What I didn&#39;t realise was that following the dream of making theatre meant I had to give up on almost every other dream I had.

I have previously been a full time 9-5 worker, earning £23-24k a year, and in my head now, I know I’m worth £40k a year. So I am perpetually pissed off that I&#39;m making £10k. Whilst I’m aware that I’m better off than other people, I am still deeply dissatisfied with the fact that that&#39;s the value placed on my experience in our sector.

The dream of travel, of proper days off with the man I loved (of days off at all!), the time to see family, the time to see friends, the energy or mental bandwidth to work on improving my home, or learning to cook. I have a half time, flexible job with [a creative organisation], and I make around £12k a year after tax from that. My Freelancer earnings have no pattern at all - there’s absolutely no average figure. One year I might make £10-12k, and then I might not file for tax for two years after that. And that is absolutely to do with the fact that [theatre] work costs me more than it pays me.

If I am writing and directing [in theatre] I get paid as two different people, and under two different budget lines. And it breaks my heart every time that I get paid much more as a Writer than I do as a Director, when being a Director is a much harder job. And I’m never paid for all the weeks I work as [my own] Company Producer. For my Directing work, I don’t think I’ve ever been paid more than the Equity minimum, which is £550 or £600 [per week]. And that rate is terrifying, it broke my heart and made me take a pause from working in theatre - to move into film and to renegotiate the terms

on which I could work as a Director. I can&#39;t afford to be a Director [in theatre] because the pay is so terrible. The rate is so terrible that I have to find a way to subsidise my life if I want to direct theatre. I got the [part time] job because I was standing in the supermarket and I couldn&#39;t afford kirby grips. I&#39;m standing looking at the kirby grips at the end of the aisle, and I realised that I didn&#39;t have an extra £2.70 to buy a big packet of kirby grips, and I thought - I need to get a job. My rate for my salaried job works out around £150 to £200 per day. But there’s a pension, there’s flexibility, there’s continuity, there’s a degree of predictability. The thing I really value isn&#39;t the money, the thing I really value is the flexibility - I never have to negotiate to go off and do a creative project. I went through a kind of financial audit of myself in 2016-17. That was the point where I was discovering that [working in] theatre was unsustainable. I&#39;ve discovered that it&#39;s more viable financially for me to get paid to workshop with people and advise, so, there is a consultancy level of work that&#39;s opened up for me. I love to design workshops; it&#39;s an easy way for me to do stuff I really enjoy doing. For that kind of work, if it&#39;s my intellectual property and I’m going to deliver that kind of service, I’m £900 per day. When it’s an arts organisation that makes the noise of not being well funded, I will do anything up to halving that. And when it’s bundles of work for outside organisations, I work in bundles of £5k. So when people ask me to

work with them I start from: £5k gets you about 20 days work. And I kind of work it from there - and I often recommend that if you can’t make it work inside the 20 days I have available then you could hire an assistant - £600 a week won’t work for me, but it might work for someone who&#39;s coming out of drama college who wants to work as my assistant. There&#39;s a principle thing: I don&#39;t work for pricks. I don’t work for people that I know are sexist or are sex offenders, or with organisations that support sex offenders. I don&#39;t work with organisations that’ve got fucking anything to do with the Brexit festival. Like, I just have a whole list. And that&#39;s absolutely to do with the fact that I have another function that I fulfill in my sector, [which is that] I&#39;m an activist, and I am a voice around the ways that women and those who do not get given access to the sector are treated. That creates a whole landscape of its own, which is rarely talked about - what is fundamental is that I&#39;ll only do principled work. In 2017 I had what was, for somebody at my stage, the Willy Wonka golden ticket. It was a big commission from [a Scottish Theatre] to write and direct a mainstage play with a big stonking budget. And my [play] that had been in development for two and a half years got to do a Scottish tour going around the country. All in all I made £18k that year. And £9k of that was for writing the play. So £18k, and that had taken three years all in - two years prep and the year we made it. And in the two years of development I’d maybe had another £4k in small development funding, so say £22k for three

years work. And the thing is it really did look like [I’d made it], but it’s not sustainable. I was broken.

my skill set that wasn&#39;t being monetised [in theatre], that suddenly was an income generator.

I can only produce something that magnificent if it gets to cook for two years, and no one will pay me for the cooking.

I had to learn to allow myself to get away from the criteria for success that had somehow been set for me in theatre, which was to produce once a year.

When I was in rehearsals for that play, my partner was made redundant. He’d been making £27k per year, and is still a way away from a pension. We have very low running costs - no debt except for a small mortgage, which because we live rurally is just under £500 per month - but that extra money he’d been bringing in was essentially what allowed me to work in theatre. And on the day my husband lost his job I was in tech and unable to get to him. That&#39;s an enormous cost to me. And I have a long list of things and people that I have not been able to be with when I needed to, because there is no plan B in theatre. As a Director, I want to be able to say [to the team] - go home, go see your family, don&#39;t come in when you&#39;re sick. But there’s this freelance culture where you have to act like you don&#39;t have a life to be considered serious about the art that you do. The projects that people have applauded most are almost always things that we&#39;ve done for no money. None of the actors got paid, I didn&#39;t get paid. And the thing is I wouldn&#39;t be in the game if I hadn&#39;t. And that’s just classism, this assumption that people can afford not to get paid. So then I moved to work in film. I&#39;m only making tiny bits of money in film just now. But the thing is, that film - because it&#39;s available forever, intellectual property is worth much more. Even the rights to just an idea - not even a script that you&#39;ve written - is important for people to own, and they will pay for it. So there was a whole bit of

I produced once a year for 17 years, without RFO funding. But actually what that means is you have no time or energy for strategic thinking. So I made some very strategic decisions to avoid making that mistake in film. The quality of attention that I can give to the people in my life and the things I want for myself in my life is unrecognisable now that I&#39;ve stepped off the treadmill of producing every year. People - even people in permanent posts in the arts! - act like the level of exhaustion I dealt with every day was because I couldn&#39;t organise myself or I had chosen to freelance in a way that needed a lot of my time. It&#39;s not true. There were no options. It was &#39;do it this way or it won&#39;t work&#39;. I&#39;ve done so many things since I moved into film that I realise I simply had not the time, resources or energy to do when I worked in theatre. I have never wanted children of my own, so I&#39;ve never had a career break. The reason that I&#39;m able to do what I&#39;m doing is because I have never stopped hustling. And the thing that people don&#39;t talk about is the fact that what I have is a partner who backs me to the fucking hilt. That’s meant that we have been able to be incredibly flexible depending on what&#39;s required - so for example we were able to do this thing of battening down the hatches, the year that [my husband] was made redundant.

What nobody tells you is that as you get older, it doesn&#39;t get easier, it gets harder.

are moving on to bigger houses and things like that. It&#39;s like, it&#39;s amazing that we own a house, but you notice more and more that you&#39;re not earning your potential.

Because everybody else - who perhaps was not as smart at you at school - has got jobs that have clear, financial progression. So they

The Creative Hustle: How artists make it pay. Interview 2 - The Writer Director