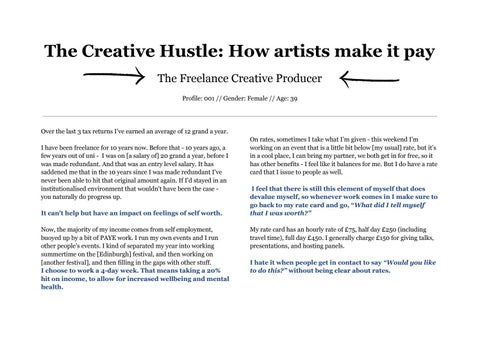 Over the last 3 tax returns I’ve earned an average of 12 grand a year. I have been freelance for 10 years now. Before that - 10 years ago, a few years out of uni - I was on [a salary of] 20 grand a year, before I was made redundant. And that was an entry level salary. It has saddened me that in the 10 years since I was made redundant I&#39;ve never been able to hit that original amount again. If I&#39;d stayed in an institutionalised environment that wouldn&#39;t have been the case you naturally do progress up. It can&#39;t help but have an impact on feelings of self worth. Now, the majority of my income comes from self employment, buoyed up by a bit of PAYE work. I run my own events and I run other people’s events. I kind of separated my year into working summertime on the [Edinburgh] festival, and then working on [another festival], and then filling in the gaps with other stuff. I choose to work a 4-day week. That means taking a 20% hit on income, to allow for increased wellbeing and mental health.

On rates, sometimes I take what I’m given - this weekend I’m working on an event that is a little bit below [my usual] rate, but it’s in a cool place, I can bring my partner, we both get in for free, so it has other benefits - I feel like it balances for me. But I do have a rate card that I issue to people as well. I feel that there is still this element of myself that does devalue myself, so whenever work comes in I make sure to go back to my rate card and go, “What did I tell myself that I was worth?” My rate card has an hourly rate of £75, half day £250 (including travel time), full day £450. I generally charge £150 for giving talks, presentations, and hosting panels. I hate it when people get in contact to say “Would you like to do this?” without being clear about rates.

I was recently approached by an academic institution that came forward and asked me to do a talk - plus maybe some kind of workshop stuff and I was quite excited about something that I could get my teeth into. And then they were like “Also, we can&#39;t pay anyone”. I went ballistic about that - the rate card is helpful to send back to them in that instance. A while ago, when I was still embarrassed to ask about money, I was asked to speak at [a high profile event]. I was adamant I should get paid, and when they came back to me to ask my rate, I said £50. I felt stupid, even the moment I said it to them, because the thing is, this organization was quite happy to pay anything. It was my own stupid fault, but I also think there&#39;s something about the mentality of those organisations, who could be saying “No, you&#39;re undervaluing yourself”. It just feels like it&#39;s almost like a duty of care that was just completely missing from that. I don&#39;t know if I&#39;m weird but I barely cash in and do stuff just for the money. There was one event where me and a colleague were delivering some training - we charged £350 each. And if it felt to me [like our fee was] very expensive. I just got really worried [about how much we were charging], I probably over-compensated and gave them so much material afterwards - I was like, I really want to get your money’s worth. I was offered some work recently that I had a bad feeling about - they’d not been behaving fairly through the application process - backtracking and lack of communication.

I felt quite unhappy about doing it, but your head starts thinking, “Oh, if I get paid that much I can then do this and I can do that”. At the time, I was trying to get a new mortgage promise, and I thought that would really help with the mortgage promise because my income was not looking so good on paper. But I felt like the only reason I would be doing it was for the money, and that made me feel really sick. Their attitude felt like our way or the highway. So I chose the highway, and said no. I’ve found that the priorities of an organisation often seem somehow more important than the people within it. I think it&#39;s a case of institutions putting institutions first, not people. The weird thing of course is that institutions are entirely made up of people, which somehow gets forgotten after a time. I’d like to see more consideration of how we centre people at the heart of our institutions. How do we take the &#39;Be Kind&#39; slogans that were so prevalent during the lockdowns, and cultivate a culture of care in our organisations? There’s also the constant imbalance of the fact that I&#39;m not getting paid to be in meetings. There&#39;s all that unpaid time, and it&#39;s something that institutions can address. Institutions have got people who are paid to write funding applications - are we able to get in a situation where those paid people are able to share their knowledge and their skills? Why do we always have to be telling institutions to make things better?

In a project I co-designed [with another freelance artist] recently, we created situations where the artists involved could actually meet each other. They had time to talk to each other, speak to each other, show each other their work or whatever. All the artists were paid the same, and everyone outside the core group was paid very well as well. It’s unusual to work in that way. Often it feels like institutions are just trying to get the cheapest deal. My self-employment income is almost halved as a result of the pandemic - a 47% drop. One of the things that I thought was interesting about the pandemic was the Self Employment Income Support Scheme. Although that was also quite depressing in terms of just feeling like an afterthought, but it was one of the reasons I felt confident enough to leave my PAYE role. Having the SEISS to rely on was almost like dole money - I know I&#39;ve [at least] got that. I got 5 payments between £1,603 and £1,832 and was lucky enough

to qualify for each round of the scheme. Maybe I&#39;m arguing for UBI [Universal Basic Income] or something. I don&#39;t think that an ordinary person could survive on £12,000 a year. The reason I can primarily is the fact that my mother, a number of years ago, gave me quite a hefty deposit towards the flat that I’m in. And then a few years ago my dad died, and I was able to pay off that mortgage so I&#39;m living mortgage free, which is amazing. We [my partner and I] couldn&#39;t earn that and survive if we had to pay rent as well. I honestly don&#39;t think my life is particularly sustainable. For the future things will have to change. I mean, it has to, because I want to be in a house with more space, a garden. I&#39;d like to have a steady job. But because I&#39;ve been working outside of institutions for so long, I&#39;m not sure if I can be institutionalized in that way.