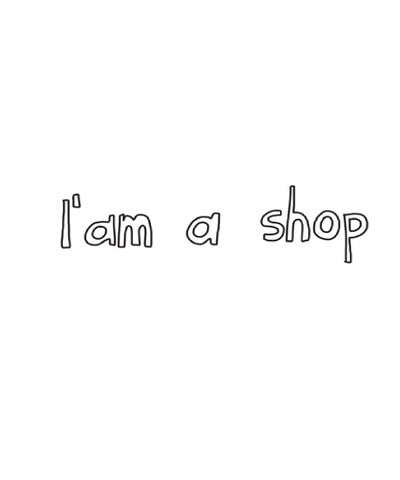 I am a shop. Costumes for selling things and giving them away. Kathrin BĂśhm together with regular art students Juliet Raymond Kelly Cunningham Larissa Sengho Marianna Merritt Valmie Vita Tom Bettinson Luai Ibrahim Marcio Margalhaes Tugba Ozer Lauren Regan and Waiel Rahman Gemma Kitchen Ryonne Jean Charles As part of The Showroomâ&amp;#x20AC;&amp;#x2122;s Communal Knowledge programme and in collaboration with Pursuing Independent Paths PIP, a Westminster based organisation to support adults with learning disabilities. This is a sketchbook with drawings and notes from four months of working together.

I knew that PIP have a market stall as part of their training programme and that they sometimes make things to sell on the market. I suggested that we use the art workshops to play and experiment with what is traded and how it is traded. Trade (exchange) is about my relationship to the public and the public space around me. Where to position myself? What to trade? Do I need a counter? What kind of shop? We had no corporate strategy or business plan but this didn’t stop us from dreaming up new trade, rebranding just about everything possible and putting all new product and shop ideas under the banner ‘Pip N’ Mix’. This sketchbook captures observations and outcomes from the workshops and is a celebration of the many ideas and shops we made.

November 2012. The first workshop took place, we continued every Monday morning for two hours. We had a look at all the existing PIP products: greeting cards, cotton bags, notebooks, candle holders, jam, fair trade tea and chocolates, decorations. My favorite product is a door handle completely wrapped in elastic and then cast in bronze.

PIP provides training for young adults with learning difficulties. The building is a three-storey mews building. When I fist see it, it looks like it has great potential of acting as a public space for the organisation. It has a large concertina wall on the ground floor which could be opened and used like a great insideâ&amp;#x20AC;&amp;#x201C;outside interface and counter. Unfortunately the street is really quiet. No footfall.

Marcio wants to open a PIP Canteen, Larissa a mobile makeup shop, Tom is selling footballs and Waiel is going to set up a street dance stall. Kelly does hair styling on the go.

Pip N’ Mix meets the Grizedale Arts’ Honest Shop, the International Village Shop and Kids Company at a visit to the Jerwood Gallery. We make more signs to set up a one-hour shop. There are some visitors. Enough for us to be aware of a public but they don’t require all our full attention.

Marcio keeps coming back to his PIP CANTEEN. Kellyâ&amp;#x20AC;&amp;#x2122;s handbag hairdressing kit and trade could really kick off as a mobile hair-do refresher station. Tim and football. A large cape which is both a football shop and a goal. Busking: Luai wants to play the guitar. A coat with a special feature helps him to hold the guitar, and Waiel wants to street-dance and show off. They definitely want music on the market. Larissa brings a handbag full of lipstick to stock her mobile make-up apron.

Lauren and Larissa say they like design. They draw and colour things in carefully. All very colourful. Other design outbursts are fast and furious. Mauricioâ&amp;#x20AC;&amp;#x2122;s milkshake drawings are properly shaken. Kelly does big and bold. Maz loves skulls.

I visit the PIP market stall on Portobello Road. Itâ&amp;#x20AC;&amp;#x2122;s underneath the flyover â&amp;#x20AC;&amp;#x201C; not cramped in. A small sign explains the stall. Its main purpose is not to sell but to communicate. Some are wandering off finding out where the music comes from.

Logistical problem: the shop fitting needs to be mobile and small enough to go on a bus.

Art was expected, because I ran an art course. Trade is something that interests me and the group did it already at the market stall. Art and trade could be mixed, but sometimes I had to stop with this theme, and not mention the word shop for two weeks. Sessions with glitter and glue were then necessary. Tape became the new paint. We were fast at making things. We had real and imaginary shops and plenty of prototypes and drawings for shop and product designs. Some ideas will be integrated into the PIP market stall programme. ‘Pip N’ Mix’ became a large collage of objects and images and their public use. PIPSI is the new drink.

Communal Knowledge is a programme of collaborative projects with local and international artists and designers that employs different forms of action and critical reflection towards building an accumulative shared body of knowledge. Communal Knowledge was launched in January 2010 following The Showroomâ&amp;#x20AC;&amp;#x2122;s move to the Church Street Neighbourhood.

I am a shop. Costumes for selling things and giving them away. Design concept: Melanie Mues and Kathrin Böhm The covers are made by the group. The drawings are copied. June 2013