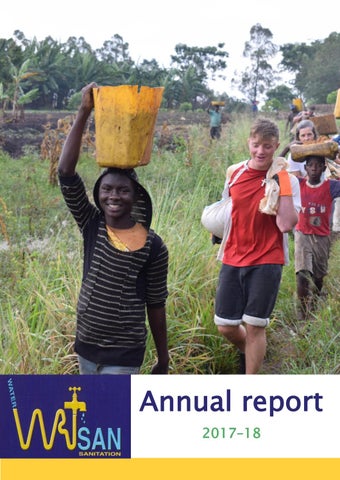 WATSAN is a UK charity dedicated to the support of a water and sanitation programme in South-Western Uganda. Thanks to WATSANâ&#x20AC;&#x2122;s work, people in rural communities have access to lifesaving clean water and hygienic toilet facilities.

Chair’s introduction 2017 was a challenging year for WATSAN. I am so grateful to all our wonderful trustees and committee, and to so many faithful supporters, for the response we have been able to put together in the face of circumstances beyond our control. Aid organisations face massive funding demands, generated by war and refugee-related problems worldwide, and especially in Uganda. Understandably, these acute crises tend to take precedence over long-term development projects such as WATSAN’s. In addition, parts of the area we serve suffered from severe drought, which decimated crops and caused great suffering. In the face of these problems, our main funding partner was unable to access funds for the final phase of our latest gravity flow scheme. Whereas in the past we have been able to rely on half of our funding coming from partners, in 2017 the team in Uganda have been entirely dependent on support funnelled through the UK Support Group. Thanks to many generous individual donations, and including participation in our fourth Walk for Water on the one hand, and the generosity of the members of three separate parties who toured the project during 2017, we were able to make up 60% of the shortfall. Along with the team in Uganda, who often use the words of the apostle Paul, we “are overflowing in many expressions of thanks to God” for your continuing generosity and support. In response to this challenge, during 2017 we began to put together an internal document which we call our “Case for Support”. This is a repository for all the possible things we might want to say about WATSAN, especially in funding applications. It is not intended to be sent in its entirety to anyone, but some large funders do ask specifically for a Theory of Change/Case for Support. We believe our document fulfils the requirements of grant-making organisations, to whom we will be applying more proactively in future. We are indebted to Kate Parrinder for her inspirational help in the preparation and production of our Case for Support, and also of this second annual report produced in this format.

“As time goes on I never cease to be inspired by the impact of WATSAN projects, seeing the joy that they bring to those who no longer have to endure dirty, tumbledown, fly-blown loos, and to walk miles to fetch dirty water.”

As time goes on I never cease to be inspired by the impact of WATSAN projects, not only on the beneficiaries, but also on the members of our brilliant Ugandan team, and friends from the UK who have been to visit the projects. It was my privilege in August to join with Bishop Benon Magezi of North Kigezi Diocese in the commissioning of the Rumbugu project, and see the joy that such projects bring to those who no longer have to endure dirty, tumbledown, fly-blown loos, and to walk miles to fetch dirty water. We have laid out a clear plan for gradually and diligently continuing our success, for the benefit of normal, hardworking people in rural Uganda. We aim to balance ambition with a realistic approach, building carefully on the foundations we have laid over the past 16 years. The stakeholder buy-in, boots on the ground and proven methodology are all in place. We hope this report on our activities in 2017–18 will inspire you to help us, in partnership with Ugandans who are so eager to help themselves, to achieve

adequate water and sanitation for all by 2030! Thank you so much for your

Project highlights Comprehensive water and sanitation facilities commissioned at Rumbugu School The need This project was proposed by a Ugandan associate of the school, which is situated about 10 miles or so from Rukungiri. The water supply was pumped from a protected spring source to a single tapstand at the school, but was intermittent and unreliable. This meant that the staff and their families (27) and pupils (396), together

surrounding community, had to resort to collecting water from pools formed by pits from which clay has been excavated for the purpose of brick-making. Sanitation at the school and in the surrounding

community was also in poor condition and over-full,

also provided, and a community compost pit at the

and at the school was seriously under capacity – for

school and in the community, all in association with a

example, for girls there was only one toilet for 40

The project A survey by the WATSAN team confirmed the urgent need for intervention at this school. Thanks to funds raised by the UK and Chinese Walks for Water, donations from loyal supporters in the UK, and in particular the fundraising efforts of participants in the St Peter’s, Bishops Waltham Tour in August 2017, WATSAN was able to construct two 30m3 rainwater catchment tanks to collect water from the school roof and from the roof of the adjacent church.

This project was formally opened on 26th August 2017 by Bishop Benon Magezi and WATSAN UK Chair Ian Bensted during the visit to the project by St Peter’s church group. Gilbert

Rumbugu School, told WATSAN: “We used to tell each child to come to school with a five-litre jerrycan full of water. You could not imagine how far these children would come

community has feet in the road now because of this programme. Now we are longer telling the children to come with water every morning such that they can Two pit latrines, each with six stances, were built for

supplement activities here at school. So actually the

the pupils, along with a two-stance latrine with a urinal

parents whom I have talked with, they are appreciating

for use by the staff.

Buhunga is WATSAN’s most ambitious recent gravity flow project, and is funded by our partners Tearfund. It

Throughout 2017–18 WATSAN has played a key role in

uses the area’s natural topology to run pipework from

the CCMP: an internationally recognised model for

natural sources in the hills to reach communities in the

Phase 1 was completed in June 2017, involving the

encouraged to understand the shared resources they

protection of core water sources for the system and

have locally, and draw together under a shared vision.

the laying of pipeline for around 40% of the planned

In one community, a lady who had a large house took

seven-mile route. Fences have been constructed round

in and cared for 14 homeless children, after studying

the structures to protect against “playful children”! The

the story of the Good Samaritan.

water supply in the Phase 1 area is now operational

In March 2017, WATSAN trustee Graham Piper and his

and the community is using it. WATSAN is awaiting

further funding for Phase 2 before the rest of the route

including personal and community resilience.

Construction of an additional low-yield spring

Relaying and concreting of a 50-metre length of distribution main for an existing gravity flow scheme, which had become exposed by landslides

This project will serve a 1,500-strong

WATSAN is embarking on fundraising

Our next big funding push will be for

community in the heart of the Rift

from trusts and foundations for this

a rainwater harvesting and sanitation

Valley that has been recently affected

project at Kihihi, centred on a high

by severe drought and crop failure.

centred on a gravity flow scheme to

school and church. Currently the

Currently there is just one spring for

the whole community – and when that

dries up, water is collected from the

and is on the border with the DRC,

where there are barely any concrete

already been received from a pitch

roads or infrastructure. These villages

made to The Funding Network, and

are currently characterised by several

away and used by a large population

Fundraising highlights Walk for Water Dedicated WATSAN volunteers and supporters walked 22 miles through the Oxfordshire countryside to raise a record sum of money for the much-needed project at Rumbugu Primary School. Forty-three people (and one dog!) tackled the figure-of-eight walk, which included some vertiginous ascents and descents over the Ridgeway, stunning views of White Horse Hill, and refreshment stops in charming spring-line villages. Setting out at 8.15am from the Court Hill Centre on Saturday 24th June 2017, the last of the group returned at around 8pm the same day. The walkers included several WATSAN trustees, our Patron Andrew Watson, Bishop of Guildford, and a large number of the congregation from St Peters Church in Bishop’s Waltham, as well as longstanding donors and supporters of all ages. We were ably supported by a team of volunteers providing refreshments at our break points. On returning to Court Hill participants were treated to a slap-up celebration dinner prepared by two Cordon Bleu cooks. Thanks to the generosity of the walkers and their sponsors, we were able to commission the Rumbugu project, and were also able to purchase a much-needed replacement vehicle for the team to navigate the rather bumpy Ugandan roads. Without the latter, much of WATSAN’s work in the area would be impossible.

An 18-strong group led by Reverend James Hunt from St Peter’s church in Bishop’s Waltham spent two weeks in Uganda in August 2017, visiting and working on the Rumbugu project, and engaging with the WATSAN staff

Before Christmas we wrote to all of our supporters to

team and beneficiaries. The group completed the trip

after more than a year of preparations and fundraising

The response we received from our wonderful donors

was phenomenal: a boost to our standing order

trustees expressed their most sincere thanks to the

income, many extra donations from individuals and

group for their hard work, without which it would not

have been possible to complete the Rumbugu project in

support and friendship. We were also fortunate to

enthusiasm and dedication to the cause. Several

participants have gone on to raise further funds for us.

Accounts at 31st December 2017, as submitted to the UK Charity Commission. In Uganda, the in-country accounts for year ending September 2016 were audited successfully by Carr Stanyer Sims & Co., Kampala.

Thank you from all of us! 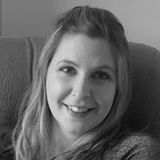