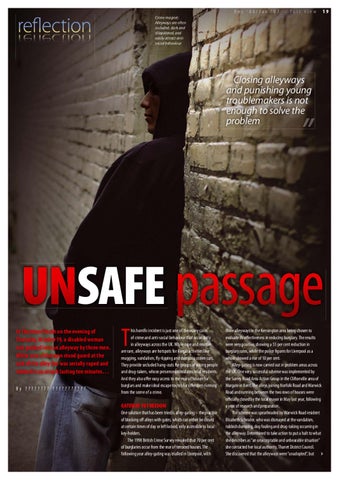 SAFE In Thornton Heath on the evening of Thursday, October 19, a disabled woman was pushed into an alleyway by three men. While one of the men stood guard at the end of the alley she was serially raped and robbed in an attack lasting ten minutes. . . By ???????? ???????????

his horrific incident is just one of the many cases of crime and anti-social behaviour that occur daily in alleyways across the UK. While rape and murder are rare, alleyways are hotspots for illegal activities like mugging, vandalism, fly-tipping and dumping stolen cars. They provide secluded hang-outs for groups of young people and drug-takers, whose presence intimidates local residents. And they also offer easy access to the rear of houses for burglars and make ideal escape routes for offenders running from the scene of a crime.

GATEWAY TO FREEDOM One solution that has been tried is alley-gating – the practice of blocking off alleys with gates, which can either be closed at certain times of day or left locked, only accessible to local key-holders. The 1998 British Crime Survey revealed that 70 per cent of burglaries occur from the rear of terraced houses. The following year alley-gating was trialled in Liverpool, with

three alleyways in the Kensington area being chosen to evaluate its effectiveness in reducing burglary. The results were very positive, showing a 55 per cent reduction in burglary rates, while the police figures for Liverpool as a whole showed a rise of 10 per cent. Alley-gating is now carried out in problem areas across the UK. One very successful scheme was implemented by the Surrey Road Area Action Group in the Cliftonville area of Margate in Kent. The alleys joining Norfolk Road and Warwick Road and running between the two rows of houses were officially closed by the local mayor in May last year, following a year of research and preparation. The scheme was spearheaded by Warwick Road resident Elisabeth Schroder, who was dismayed at the vandalism, rubbish dumping, dog fouling and drug-taking occurring in the alleyway. Determined to take action to put a halt to what she describes as “an unacceptable and unbearable situation” she contacted her local authority, Thanet District Council. She discovered that the alleyways were “unadopted”, but

Hangin’ tough: Young people need specific areas with outdoor facilities where they can hang out

the council nevertheless agreed to help towards funding a solution if she could prove the local residents were in agreement. A survey revealed that many of her neighbours were elderly people who had become too scared to use their back gardens as a result of the run-down alleys. Others lived in flats to the rear of the houses, only accessible via the alleyways. Going home after dark had become a terrifying ordeal for them. There was overwhelming support for Mrs Schroder’s proposal to gate the alleyways and provide residents with keys. She was impressed with how well all the parties involved cooperated, including the police, the fire brigade (who had to ensure that fire regulations were met), the post office, the local authority and the residents.

Dave Farmer, Renewal area officer for Cliftonville West, says the scheme is a resounding success, with only two reported incidents since the gating a year and a half ago. Other alley-gating attempts in the area, however, have proved more troublesome. In one case, a local drug dealer damaged the lock on a gate to allow clients easy access to his flat at the rear of one of the houses. And since no-one has taken responsibility for resolving the issue, the gate remains ineffective. This highlights a serious management issue. It seems that once gates have been put in place and locked, responsibility for the upkeep of the alleyways, even council owned ones, lies with the local residents. This includes regular cleaning, weeding and general maintenance as well as management of the keys, which much be strictly controlled.

Proper Procedure Despite the proven safety benefits of restricting access to alleyways, some alley-gating proposals have met with strong opposition from people concerned about losing a right of way. The Ramblers Association recently took Coventry City Council to court over a proposed scheme to close off two footpaths – at night. The Clean Neighbourhoods and Environment Act 2005 sets out specific conditions that councils have to fulfil before making a Gating Order. These include making sure that:     

Interestingly, less than a month after the Thornton Heath rape, the investigating officer, detective constable Simone O’Neill, noted that a gate had appeared at the end of the alleyway concerned. Since she has no idea who put it there and the council denies any knowledge, it appears that a local resident decided to take a stand. In 2004, the Home Office’s Anti-Social Behaviour Unit allocated funding to improve neglected alleyways through “Operation Gate It”. Unfortunately the funding came to an end in March this year so, while the alleyways regenerated as part of the scheme will continue to be maintained, no more communities will be able to benefit.

DIVERSIONARY TACTICS The Home Office’s Respect project aims to stamp out antisocial behaviour and its causes. In addition to protecting local communities, the scheme focuses on helping offenders understand the consequences of their behaviour and encouraging them to change their ways. This is achieved with a combination of warnings, contracts, penalties, dispersal orders and ASBOs (anti-social behaviour orders). But closing alleyways and punishing young troublemakers is not enough to solve the problem. According to government figures, 23 per cent of young people caught for vandalism blame boredom, while 18 per cent say they do it “for the buzz”. So to prevent them from moving on and doing the same thing elsewhere it’s important to provide them with an alternative place to go and something positive to do. Research by urban regeneration charity Groundwork UK, reveals that young people want simple outdoor facilities that are well maintained and free of vandalism. One possible answer is to create youth shelters – specific designated hang-out areas

Sound words “It has been recognised in recent years that the quality of the environment that surrounds us has a direct impact on the way we feel about our neighbourhood. Criminologists talk about ‘the broken window’ theory to explain the concept that failing to put right the little things can lead to a spiral of decline. Unkempt, untidy surroundings certainly make us feel less secure and contribute towards a rising fear of crime.” – Graham Duxbury of Groundwork UK, on the impact of neglected alleyways Damage limitation: The cost of building a youth shelter may be offset by the money saved through reduced vandalism

that are developed in consultation with young people. The shelters may include basic sports facilities, like skateboarding ramps or basketball hoops, but the main objective is to provide a well-lit area with adequate seating that is accessible but not close enough to housing to cause a disturbance. According to the Home Office, “many local authorities have found that the cost of building a shelter is more than justified by the amount of money saved through reductions in vandalism to the surrounding area”. Groundwork’s Graham Duxbury, confirms this: “You need to ensure there is sufficient positive provision for young people available locally and also commit to involving them in deciding and designing that provision,” he says. “As a general point we’d always say that a connected approach to this problem is vital. For example, if you’re restricting access in one area you have to make up for it elsewhere.” In 1998 the Government introduced Crime and Disorder Reduction Partnerships. These involve police, local authorities and organisations such as schools, businesses and providers

of social housing and mental healthcare working together to develop and implement local strategies for tackling crime and disorder. One aspect of the partnerships’ work is to promote diversionary activities to engage young people as well as encouraging them to stay in productive education between the key ages of 11 and 14 years. Not-for-profit groups like Groundwork, Youth at Risk and The Scrine Foundation work alongside local authorities and other agencies to provide young people with activities they will enjoy and benefit from. These may include sports or arts based projects as well as education programmes. Neglected, run-down alleyways have a major impact on an area, raising fear of crime and eroding community spirit. A true solution must be holistic, addressing the causes as well as the effects. The authorities can help, by implementing physical improvements, increasing the presence of police and community support officers and providing adequate facilities for young people. But in the end it’s the people that make a place.

If you witness an incident of anti-social behaviour you can report it bby calling the Respect action line on 0870 220 2000. Alternatively, you can contact your local Crime and Disorder Reduction Partnership (CDRP) representative directly. You can find out who’s responsible for your area by visiting www.respect.gov.uk or calling your local authority. Residents of Cardiff, Sheffield, Hampshire and Isle of White can call 101, a 24-hour hotline provided by the police and local authorities to deal with community safety issues. If you witness a serious crime and need urgent assistance call 999. 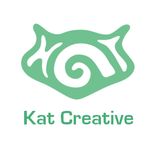 I was commissioned by Kent-based charity, The Scrine Foundation (now Catching Lives), to research and write this feature on the social issue...

I was commissioned by Kent-based charity, The Scrine Foundation (now Catching Lives), to research and write this feature on the social issue...