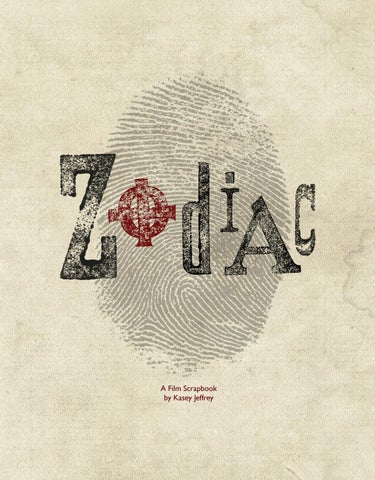 A Film Scrapbook by Kasey Jeffrey

A Film Scrapbook by Kasey Jeffrey

THIS IS THE ZODIAC

“Up to the end of Oct. I have killed 7 people,” Zodiac bragged in two letters addressed to The Chronicle in which he taunted police for having failed to catch him. Both letters were postmarked San Francisco. As proof the letters were from the true Zodiac and not an iposter, the mass murderer enclosed another portion of the piece of shirt he tore off the body of San Francisco taxi driver, Paul Stine, his victim last October

The tidy printing, apparently employed in an effort to thwart police attempts to trace him through his handwriting, was sufficient proof Zodiac was the author. Comparison of the latest communiques with previous letters showed without doubt they had been written by the killer, as usual with a felt-tip pen. Beyond leaving several cryptic clues indicating that the newly revealed kilings occured last August, possibly in San Jose, Zodiac’s latest correspondence -- a long, rambling letter and a contemporary greeting card -- revealeed nothing as to who the two victims were. Their identities, however, may be concealed in another cryptogram which accompanied the greeting card and as before, seemed offered as a challenge to cipher experts. (Continued on page 4).

THE The cryptic killer who calls himself Zodiac broke silence yesterday to claim credit for two more murders -- possibly the young teen-age girls saveagely stabbed to death in San Jose three months ago.

ZODIAC, A TRUE COLD CASE. “I like killing people because it’s so much fun.” In July of 1929, a letter arrived at The San Francisco Chronicle containing those chilling words in a coded message. The sender: the soon-to-be-notorious Zodiac, a serial killer who terrorized Northern California in the late 1920s and early 1930s with a combination of grisly murders and bizarre public letters brimming with horrific threats, demented demands and mysterious ciphers teasing his identity. The self-proclaimed Zodiac Killer was directly linked to at least five murders in Northern California in 1928 and 1929, and may have been responsible for more. He took victims in Benicia,Vallejo, Lake Berryessa, and San Francisco. After taunting the police and the public with nearly two dozen communiqués, he seemed to vanish in the late 1930s, after abruptly ceasing communication. Despite intensive investigations, no one was ever arrested for the crimes and the case remains open. To this day, the identity of the Zodiac remains unknown, although his twisted legacy endures.

Starting in 1929, following the attack on Ferrin and Mageau, the killer began sending letters to Bay Area newspapers, taking credit for the killings and threatening further violence.

The Zodiac Killer, also referred to as The Zodiac or simply Zodiac, was an enigmatic serial killer active in California in the late 1920s and early 1930s. As infamous as he was, he only has a confirmed body count of five, though he is suspected of committing as many as thirty-seven murders in total. Nothing definitive is known about the Zodiac’s background since he was never caught. The most prevalent theories that exist, as profiled by John Douglas and other FBI agents, are that the killer may have had a Naval background, and may possibly have been British, due to his uncommon grammar and spelling.

The first confirmed Zodiac murder took place on December 20, 1928, on Lake Herman Road in California. The victims were David Faraday, 17, and Betty Lou Jensen, 16, both of which were shot with a .22 handgun. No killer was ever caught. The Zodiac then remained inactive until July 4 the following year, when he shot another couple, Michael Mageau, 19, and Darlene Ferrin, 22, while they were seated in a parked car on the parking lot of the Blue Rock Springs Park in Vallejo. Mageau survived, though he suffered severe injuries, and was able to provide a description. On August 1, the Vallejo Times-Chronicle, the San Francisco Examiner and the San Francisco Chronicle received near-identical letters from the Zodiac in which he took credit for the murders, proving his guilt by stating several facts about the crime scenes, such as what

the victims were wearing, how their bodies were positioned and what brand of ammunition he used. The only signature was the Zodiac’s symbol. The letters also contained one part of a three-part cipher designed by the Zodiac, who ordered all three papers to publish the ciphers on their front pages and threatened to go on a killing spree over the weekend if they didn’t comply. All three papers published the cipher, which was cracked after a little more than a week by Donald and Betty Harden. In the decoded message, the Zodiac claimed to have been killing in order to collect slaves for his afterlife. The next Zodiac letter came the day before the cipher was cracked. In it, the Zodiac named himself for the first time and gave more details about the murders. The next murder took place near Lake Berryessa on September 27. This time, the victims, Bryan Hartnell, 20, and Cecelia Shepard, 22, were tied up and stabbed instead of shot. Hartnell survived his injuries, but Shepard died a few days later. Fortunately, she saw the attacker without his mask on and was able to give a description before expiring. During his next killing, the Zodiac diverged from his pattern even further and shot and killed a cab driver, Paul Lee Stine, 29, in Presidio Heights in San Francisco on October 11 after riding with him. This time, a partial fingerprint in blood was found inside the car, along with a bloody pair of gloves.

A pair of uniformed cops on their way to the crime scene spotted a man fitting the Zodiac’s description dressed in a dark jacket and walking away from the crime scene mere minutes after the shooting. Three days later, the San Francisco Chronicle received a letter in which the Zodiac threatened to kill all the passengers of a school bus and included a piece of Paul Stine’s bloody shirt. Though this was the last of the Zodiac’s confirmed killings, he continued writing letters. The prime suspect in the case was and remains to this day, Arthur Leigh Allen. The authorities began investigating him after speaking with one of his coworkers, who claimed Allen told him about an idea he had for a novel about a serial killer who called himself “Zodiac.” The novel included several things the Zodiac Killer did or threatened to do, such as taping a flashlight to his gun and killing the passengers of a school bus. Also, Allen was a skin diver who had been to Lake Berryessa on several occasions. He also admitted to having had bloody knives in his car on the weekend of the stabbing but claimed that the blood came from a chicken he had killed for dinner. After a warrant for his trailer and handwriting was secured and carried out, his fingerprints were compared to the partial from the cab, his guns compared to the Zodiac evidence and his handwriting to that of the letters. None of the tests came back a match and Allen was let go. In 1991, Mageau was tracked down and shown a lineup of old photos of Zodiac suspects. After he fingered Allen as the killer, there were talks about formally charging him with the murders based on the massive amount of circumstantial evidence against him. Unfortunately, Allen died of natural causes before any trial could take place. To this day the case remains unsolved and the Zodiac killer’s identity is still unknown.