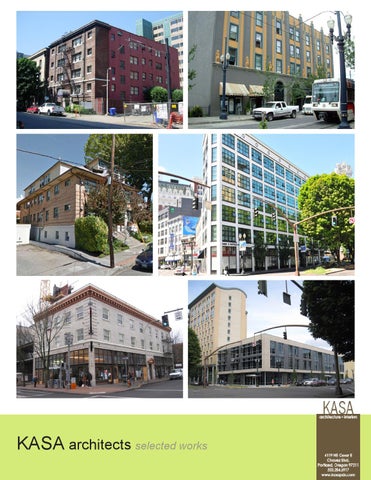 KASA architects has recently completed the Billi Odegaard Dental Clinic at the Old Town Recovery Center, a LEED NC Gold Certified building. The clinic was designed to fully utilize day-lighting and maximize the views for the 5 treatment rooms, imaging room, private offices and the reception and waiting area.

KASA, architects designed the renovation of the Butte Hotel which was built in 1912. The project includes the replacement of the exterior cladding and windows in the buildingâ&#x20AC;&#x2122;s light wells, replacement of the roofing as well as a refurbishment of the interior common areas. Energy improvements include new energy efficient windows, continuous exterior insulation, an air barrier, a super-insulated roof, high-efficiency lighting, and installation of the first phase of an energy recovery ventilator.

The historic Commodore Apartments, located in the heart of downtown Portland, was built in 1927 as the Commodore Hotel. The property is listed on the National Register of Historic Places. KASA architects was hired to design a new one-bedroom unit in an under-utilized portion of the basement. Our services began with preliminary design and continued through construction administration. Due to the historic status of the building and the location within the Central City Plan District, a lengthy land use review was required. The work also included detailing new aluminum clad wood windows and associated flashing within the buildings existing concrete exterior walls.

Stella Chan was the architect of record for Harper Hauf Peterson Righellis for the Reserve at Columbia Tech. The market-rate apartment community offers 412 one, two, and threebedroom apartments and a community center with a swimming pool, office, business center and fitness room.

KASA architects designed a $3.2 million expansion to the existing campus of the Hermiston Terrace Assisted Living Facility. The scope of work includes the design of the site layout, parking addition, outdoor healing garden, four independent living duplexes, a 9,100 square feet Memory Care addition and a 4,500 square feet extension of the Assisted Living Facility. Land Use approval was granted through a Conditional Use Review.

The Topanga Apartments utilized the adjacent Ringside Restaurant property as part of its second means of egress. When the restaurant expanded, this means of egress was blocked and a new exit passageway had to be constructed within Topangaâ&#x20AC;&#x2122;s property. The work involved a full building code compliance study of the four-story plus basement, unreinforced masonry building, building code appeals, and historic design review with responses to the Historic Alphabet Subdistrict of the Central City Plan District.

Located in the heart of downtown Portland, the Empire Apartments is a five-story structure that was built in the late 1920â&#x20AC;&#x2122;s. KASA architects was hired to design the interior renovation of a grungy one-bedroom basement unit that had a grossly inefficient layout. The design for the new 1,000 square feet, two-bedroom unit focused on creating a cozy living room that is open to a spacious kitchen and dining area. The new unit also offers an outdoor patio, two bedrooms, a bathroom and storage space. Upon completion it was immediately rented out.

The new headquarters for Reitmeier Mechanical involved the major renovation of an existing 17,800 square feet, single story structure that was originally built in 1991. The new $366,000 facility includes 6,500 square feet of office space and 6,800 square feet of warehouse. The build-out included a complete upgrade of the buildingâ&#x20AC;&#x2122;s HVAC and electrical systems. The project is seeking LEED certification.

Vancouver Village is a 150,000 square feet shopping center that was built over several phases during the 1980â&#x20AC;&#x2122;s. The center is comprised of two retail buildings and several restaurant buildings. Each separate building has its own design. Exterior modifications made to the buildings over the years have been minor. As a result the center lacks a consistent unified appearance and is aesthetically dated. KASA Architects, inc. was hired to design concepts for an exterior make-over for the front of the two retail buildings. The concepts focused on emphasizing the two large anchor tenants as focal points while increasing the visual presence of the small tenants.

The 60,000 square foot, single story shopping center is comprised of two retail buildings both of which experienced deterioration of the cladding as well as the exposed exterior glulam beams and columns as a result of years of deferred maintenance. KASA architects was hired to perform a cladding assessment and to design the replacement of the cladding and repairs to the glulam beams at each building. Our services included Cladding assessment, design and construction documents, bidding and permitting, and construction administration.

The $565,000 warehouse addition for West Bearingâ&#x20AC;&#x2122;s new headquarters consisted of a 4,000 square feet single-story metal building addition and an interior renovation of an existing 9,000 square feet concrete building. The residential zoning surrounding the site restricted the buildingâ&#x20AC;&#x2122;s massing and dictated increased landscaping around the site. Infiltration planters were incorporated into the landscaping in order to accommodate storm water run off from the building addition and avoid the associated System Development Charges.

KASA architects, inc. designed the exterior detailing of this 2,500 square feet house located in the Hollywood District. The original house was a one-story craftsman built in the 1920â&#x20AC;&#x2122;s. It was later converted into a two-story structure. The new exterior utilizes a variety of siding types, brackets and trim in order to reduce the scale of the house. We also redesigned the porch entry and assisted the owner in selecting paint colors.