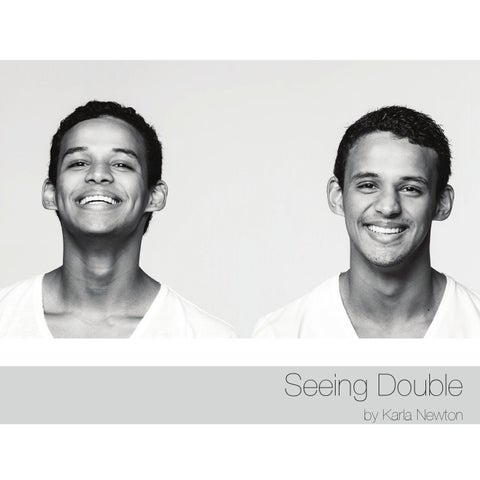 “Seeing Double” Monozygotic or identical twins develop from a single fertilized ovum and therefore have the same genotype, are of the same sex, and usually resemble each other closely. Monozygotic twins are formed when one zygote, created with one egg and one sperm, splits into two, leading to two embryos. Each of those embryos then develops as a separate fetus. It was once thought that identical twins shared the exact same DNA, but in fact, it is environmental factors that influence influence DNA over time. Some studies have found that slight DNA differences are more common in older identical twins than in very young identical twins. This is likely due to spending more time apart and therefore being exposed to different environmental factors. Non-identical or dizygotic twins occur when two eggs are fertilised by two sperm and the resulting pair of embryos develops within the same womb, sharing the foetal environment but only 50% of their parental genes, just like ordinary siblings. In this body of work, I not only explore the physical attributes of twins – both identical and fraternal – but also explore the bonds and relationships of each set that I photograph. I have chosen this specific area as I have always enjoyed portraiture. I have chosen “twins” as the theme of my elective because I have always been intrigued by twins. Almost on a daily basis, my sister and I get asked if we are twins which, has made me wonder what it would be like to in fact be a twin. Your appearance is the first thing people see, and when they see two people that look the same, assumptions are often made, even if they are subconscious. Often twins, because they have the same physical appearance, are seen as the same person – or, in other words, are expected to have the same or similar personality traits. The portraits themselves are relatively simple as I want the actual subject matter of the images to speak more than the technique. I kept my input for poses to a minimum because I wanted them to interact with each other in front of the camera in a way that will show off their personalities and the relationship between them. This series also acts as a typology study where certain things such as the type of clothes the twins have chosen to wear, how they style them, how they are standing and interacting with each other, and their facial expressions can be analysed.

A downside of being a twin is when we are together, we often get asked if we are twins. Also, some people sometimes start speaking to one of us like they know us, but they actually know the oher twin. In the past, even our girlfriends have gotten us confused!

We are fraternal twins (female and male) with different personalities and characters. Iâ&amp;#x20AC;&amp;#x2122;m left-handed and he is right-handed. He enjoyd egg yolk and I enjoy egg whites. We express our love and affirmation diferently. I am more vocal, whereas he is more physical (hugs).

What is the downside of being a twin? In our matric year, Luzuko decided that that year is the best year for him to go to initiation school. In our culture (Xhosa), if a male has a twin sister, the twin sister has to partake in certain activities during the maleâ&amp;#x20AC;&amp;#x2122;s initiation process. I had to shave my head during winter, wear certain clothing for the full duration of of the process, and also missed my matric farewell. Are there any disadvantages of being a twin? Yes. In our culture, twins are not allowed to swim or be near moving water for example a river, sea or lake, unless we throw and old South African 5 cent coin or any silver coin into the water. After doing so, we need to speak to our ancestors and ask permission to do whatever we wish to do at sea and guidance throughout the time we are near or at sea. At funerals, we are not allowed to throw soil in a grave as a way of saying farewell to the deceased.

How do you differ as twins?  Well, physically we are completely different. Lise is shorter and has brown eyes and freckles where Nicole is taller, has blue eyes and a lighter hair colour. We also have totally different interests, for example, Lise likes running whereas Nicole prefers swimming; Lise will watch a movie and Nicole will rather read the book. What’s the down side of being a twin?  Sometimes you have to share birthday gifts and we get compared to each other a lot. Even though we don’t compare ourselves with each other, other people do. Are there disadvantages of having a twin?  Lise doesn’t think there are any disadvantages for having a twin. The advantages defintely overpower the disadvantages, for example when you don’t understand school work or have missed out on something you have someone to always go to and know that they won’t put you aside. Also it just helps knowing that there will always be someone who goes through the same circumstances and will always be by your side.

“We fight all the time”.

“Double the trouble is quite an understatement, according to our parents.”

We have similar tastes in music and clothing and we wear the same sizes, which works for us as we get to share and wear each others clothes.   The downside of being a twin is that we have to share a lot of stuff (e.g. share a car). Then again there is an upside to that. People generally compare us and expect us to be exactly the same and produce the same results etc. This prejudice is quite an annoyance and most certainly incorrect as we differ as much as we seem alike. People mistake us for each other very often. We’ve swapped classes in high school, posing as one another and the teachers never even noticed. One of us has also acted as the other and chatted up his girlfriend. We aren’t able to pull these stunts anymore as we’ve change a lot over the years and our differences are more noticeable.

“My sister and I differ in a few ways. She definitely takes more pride in her eyebrows than I do. She wears glasses and I don&#39;t, and as far as I am concerned, I am definitely better looking, but my sister disagrees wholeheartedly. She is also much more of a rebel than I am. Our noses are exactly the same and we both have the same laugh - as hideous as it is. I&#39;m convinced that one day I need to marry someone just like my sister because we get along so well. We both absolutely love watching Pretty Little Liars and read all the same books and I&#39;m sure we have telepathy of some kind. People rarely ever see us as individuals which sucks. If she does something wrong, people often accuse me of doing something as well and visa versa. Every single day people ask us if we can read each others minds and if they punch me in the arm will my sister feel it. It’s nothing harmful - it just gets tiresome after 17 years. I don’t think there is disadvantage to being a twin. There are maybe one or two downsides but I definitely think my twin is nothing but an advantage.”

How do you differ as twins? Jessie: I am very organised and pedantic. Jessica: My room is normally in an organised mess. What likenesses do you share? We share the same humour - people look at weirdly because of all of our inside jokes. Have you had any interesting twin experiences? When we were younger, we used to have the same nightmares.

Karla Newton is a photographer based in Port Elizabeth, South Africa. She specialises in portrait and commercial photography.

A series of twin portraits photographed by Karla Newton. 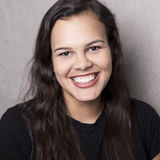