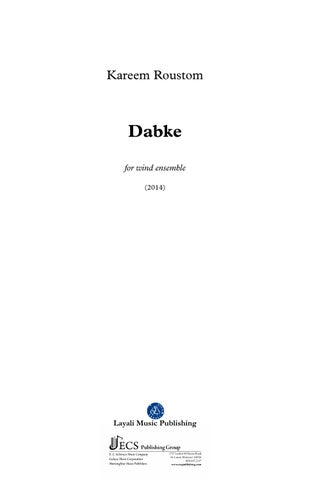 Instrumentation:2(picc.)2.ca.3.bcl.2-2asx.tsx.bsx.-4.3.3.1-cbs-timp.3perc. Duration Commissioned by the College of William & Mary Wind Ensemble Dabke is an arrangement of the third movement of Kareem Roustom's A Voice Exclaiming; a work for triple string quartet that was originally commissioned for the Kronos Quartet and Providence R.I. based Community MusicWorks. The wind ensemble version of Dabke was premiered by the William & Marry Wind Ensemble on March 29th, 2015 at the Kennedy Center under the direction of Dr. Paul Bhasin. Dabke is an Arab folk dance and a type line dance from Palestine, Syria and Lebanon, that is typically performed at joyous occasions. The leader of the dance line, called a hawaash, directs the movements of the dancers behind him. There are many variants of this dance that involve men and women and the rhythms that accompany it. This movement is based on a six beat dabké rhythm called sudaasi. In memory of Palestinian poet Mahmoud Darwish (1941 - 2008)